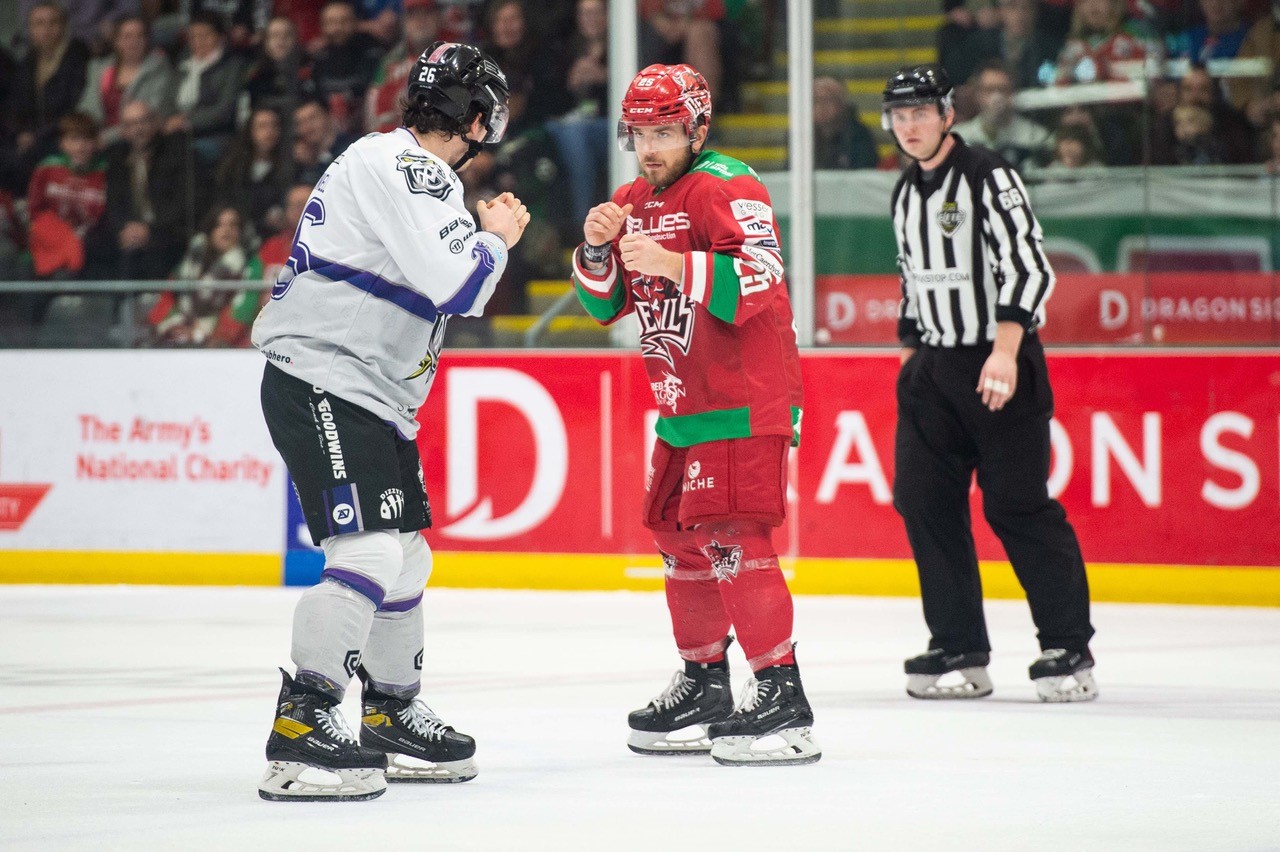 The Cardiff Devils put a miserable seven days behind them to temporarily sign off from their Elite League campaign with a morale-boosting 4-1 win over Manchester Storm on Sunday night.

The Devils return to winning ways ahead of being the host venue for their Continental Cup group stage, following successive underwhelming defeats against the Belfast Giants and Dundee Stars.

Hopes of an emphatic response to last week’s dire defeat in Belfast were eradicated as Elijiah Barriga’s hat-trick led the Stars to a 5-3 win over the Devils in Scotland on Saturday night.

Back on home ice on Sunday however, the Devils were finally able to right a few wrongs with an altogether more convincing performance against Manchester.

Two goals from Josh Waller bookended a 4-1 victory that saw the Devils improve their record to 10-5-1 in the Elite League standings, six points off current leaders Guildford Flames.

Waller, playing on a makeshift line enforced by the absence of injured Jake Cougher, shined alongside stand-in centreman Josh Brittain, who collected two assists, and a tenacious Sam Duggan.

Duggan and Brittain combined to help Waller equalise, as the left winger deftly applied the finishing touches on a move that saw him tuck the puck around Manchester’s Hayden Lavigne midway through the opening fame, after Storm had snatched an early lead.

A third period breakaway then saw Waller round off a much-improved Devils display as he tallied his fifth league goal of the season.

“As long as he’s doing the right things and using his ability to the best he can with his speed and taking pucks to net, those chances will come,” said Dupont after seeing the 23-year-old score for a successive game.

“He’s really hard to defend against when he gets going. He’s a young player for us that I see a lot of potential in. You can see it on nights and the big thing is finding his consistency which he has been doing a lot more this season.”

Kozun, making his first start since the Devils’ 5-2 loss in Nottingham last month, was beaten against the run of play after only 91 seconds, when Storm’s Ryan Barrow found space to convert a wraparound.

That would prove to be the only time he would be beaten and the Canadian improved as the game progressed, turning away 23 shots for his fourth win in five starting league performances.

The Devils refused to be rocked by the early setback and Dupont was quick to help re-establish their command of the game after dropping the gloves with Michael Korol to keep momentum on side.

“Duggan stepped up well tonight – he provided energy with that fight,” added Dupont. “It’s not always a fight that’s needed, but a fight he wanted to engage in and get the fans going.”

The Devils took a deserved lead, albeit in freakish fashion, when Cole Sanford’s second period shot deflected off the glass and somehow came back off Lavigne and slipped over the goal line.

Riley Brandt, who also fought with Jake Bricknell in centre ice in the first frame, fed a pass back to defenceman Sam Jardine, who blasted home a third Devils goal to extend their winning margin.

“It’s a good feeling – we basically laid an egg the last two games and that’s not to our standard,” said a relieved Dupont post-game.

“We challenged the guys to bring more intensity and more passion to the rink and lay it all on the line.

“For the most part, I liked our whole game tonight. There’s still a couple of areas we feel we need to keep building on, but the main thing was we kept playing with that passion and emotion that’s needed.

“I can live with mistakes, we just felt we were getting out-competed for the last two games so it was a good response and the win was big,” he added.

Thank you all for supporting us through tonight's huge win, Red Army 😈🔥

Next up, the Devils take on Europe 👀

Weekend and day passes are still available for the Continental Cup next weekend, and we hope to see you there!

ROSTER BOOST FOR CONTINENTAL CUP
The Devils now turn their attention to next weekend’s Challenge Cup group stage where they hope to have a full roster available to compete alongside opposition from France, Slovenia and Latvia.

Defenceman Mark Richardson and Coughler were both absent against Manchester to leave the Devils short with five defenceman and 11 forwards.

Richardson missed out through illness whilst Coughler is recovering from an injury sustained against Dundee, but it is understood the team are hopeful both players will ice in next weekend’s triple-header, and could even return to training possibly as early as Tuesday, although unconfirmed.

The game schedule for the Continental Cup is as follows:

STEELERS AWAIT IN CHALLENGE CUP
The Devils have also learned that they will face the Sheffield Steelers in the Challenge Cup quarter-final, over two-legs.

Following completion of the group stage, it was confirmed they had finished third in Group B behind Coventry Blaze and Guildford Flames. Other ties include:

The EIHL say dates for the quarter-final stage will be announced shortly.

Tickets for all forthcoming Cardiff Devils games, including day tickets for the IIHF Continental Cup, are available via the team’s official site.