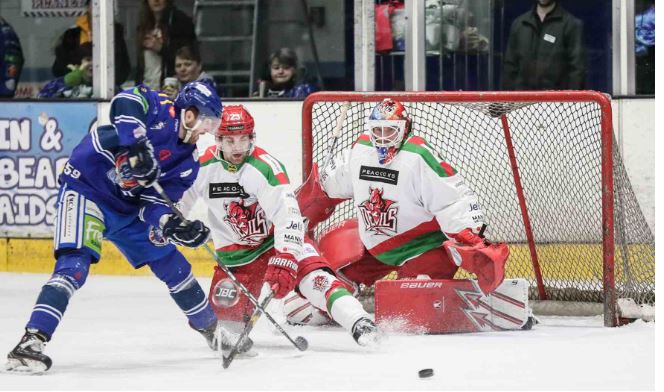 Cardiff Devils lost their final match - and their title - at Coventry Blaze.

Cardiff Devils must find a way to overcome their bitter disappointment after head coach Andrew Lord admitted he had been left “speechless” by their title-losing defeat to Coventry Blaze on Sunday night.

Poised to win their third successive Elite Ice Hockey League crown, the defending champions crashed to a shock 3-1 defeat in their final game of the regular season.

It means their rivals, the Belfast Giants, snatched the prize from the Devils’ grasp and Lord must now try and lift his players in time for their Play-off quarter-final against the Sheffield Steelers.

A devastated Lord admitted: “I’m speechless. It’s hard to find the words. This can be an amazing game, but it can also be a very cruel and humbling game – and that’s what it is right now.

“Coventry played exceptionally well and came out really hard. The first goal was critical because it gave them and the building a lot of life.

“We generated a lot of chances, but Coventry defended extremely hard and their goaltender was terrific.

“I really feel for the guys. The work and the way they did things for the last nine months, to win the number of games we have won over the last few years, to lose on a tie-break  . . . it just hurts.

“But hats off to Belfast. You have to give them congratulations. They are a heck of a hockey team.

“They kept coming at us all year and this one is going to sting for a very long time.”

The Devils began the evening tied on points with the Giants, meaning as long as Lord’s side took their game in Coventry to overtime then they would secure the title again.

However, Nicolai Bryhnisveen and David Clements put the hosts two up, before Sam Duggan’s reply made it a one-goal game heading into the final period.

Blaze forward Thom Flodqvist saw a penalty shot hit the crossbar as the clocked ticked down, with the Devils then ringing the iron, but Ben Lake secured the victory with an empty net goal with only a few seconds remaining.

In a punch and counter-punch title race, the Devils and Giants scrapped it out throughout the season, with the Cardiff club at one point forging 11 points ahead in the standings after doing the double over the Giants at the end of January.

But a scintillating finish to the campaign, which saw the Giants go 19-4-1 in their final 24 games, helped them overcome their rivals at the final hurdle, winning on regulation wins – the Giants had 45, the Devils 43.

Now the Devils must recover and put aside their disappointment to travel to Sheffield on April 6. The Devils will host the return on April 7.

The Devils have won five of their six head-to-head matches against the Steelers this season, but lost the most recent meeting – a 5-4 defeat just two weeks ago.