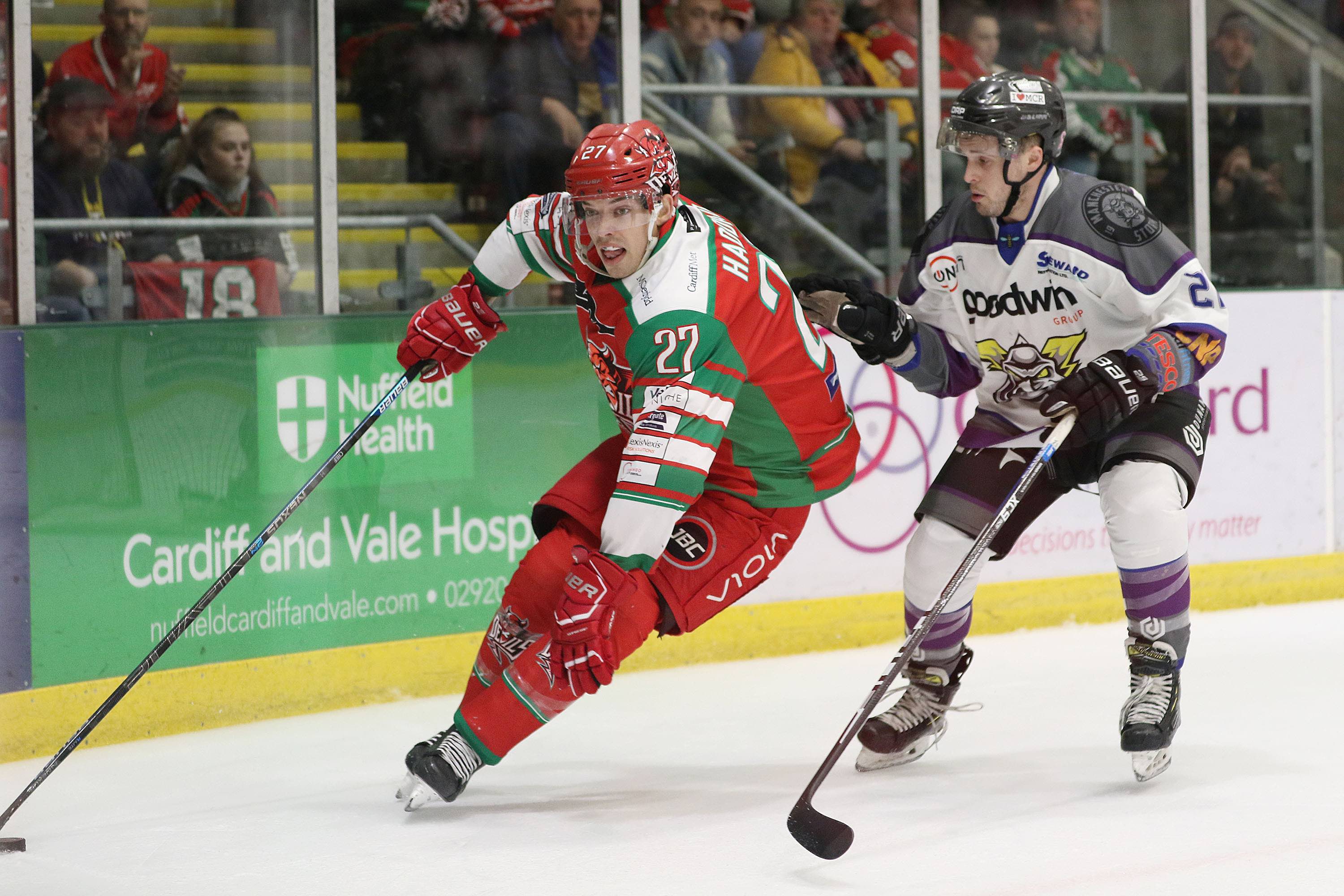 Cardiff Devils have started the most testing spell of the ice hockey season with a 3-1 home win against Manchester Storm.

That is the first of five matches in nine days – and one of those is against reigning Champions Hockey League title winners Frolunda Indians from Sweden.

Devils now play Coventry Blaze in a Challenge Cup group match against Coventry Blaze, fly to Sweden on Tuesday and then take on Dundee Starts at home next Thursday.

Lord was delighted with his team after securing a third successive victory, beating Manchester at the Viola Arena in Cardiff Bay.

Joey Haddad (2) and Welshman Matthew Myers scored the goals and Lord said: “It was a fun night.

“There was a great atmosphere again, not only in the standing section.

“Everybody was bringing it and the clap banners were huge as well. It was electric around the area.

“We had a tight, close fought game against Manchester, who played well and their trap gave us some trouble. It’s the first time we’ve faced a full-on trap this season.

“I was extremely happy our special teams. They were a big part of game. This was a really big league win for us.”

Former Devils captain Ryan Finnerty is the Storm head coach and he said: “Five v Five we played pretty well and had the better chances.

“Devils scored couple of powerplay goals and that was the game.”

Blair Riley, Mike McNamee and Evan Mosey were all missing from the Devils team because of injury, but it is thought Riley and McNamee are progressing well towards fitness.

Devils now head to Coventry Blaze in the cup and Lord says: “That’s a sort of home away from home for us. “Coventry are another tough, really hard working team. Their goaltender (Canadian Jamie Phillips) has shown how good he can be.”

Former Devils forward Layne Ulmer, now playing for Storm, was given a big welcome to the Viola Arena.

Devils powerplay went 2/5 on the power play to sweep aside a tough Storm team.

A penalty late in the first period against Storm opened the door for the Devils powerplay to go to work at the start of the middle period. It took less than 30 seconds to double the lead when Sean McMonagle set up Haddad fired a one-timer past goalie Matt Ginn to make it 2-0 at 20-28.

Mathieu Gagnon and Devils’ Mark Louis were both called for roughing at 31-24 and during the 4v4 when Tyson Fawcett found Dallas Ehrhardt all alone and he fired the puck low past Ben Bowns to make it 2-1.

When Louis and Gagnon got out of the penalty box, they agreed to drop the gloves and head straight back into the sin-bin for another five minutes.

Storm’s defensive style was effective and frustrating for Devils, but with 19 seconds left Joey Haddad sealed the win for Devils with an empty net goal.