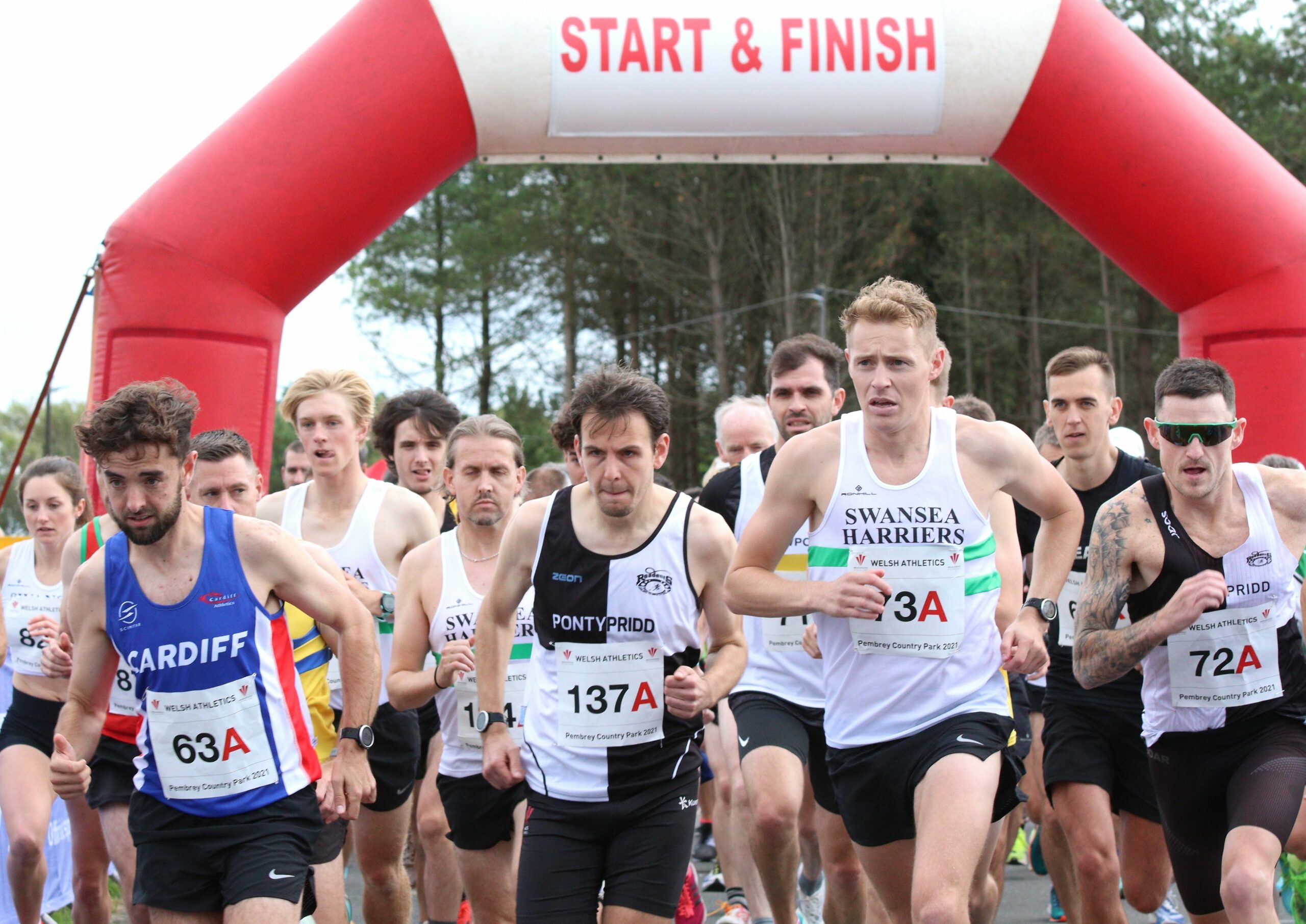 The start of the senior race at the Welsh Road Relay Championships. Pic: Owen Morgan

After a year’s break due to COVID-19, the event returned to a sunny but windy Pembrey Country Park near Llanelli.

And it was the Swansea club which was celebrating this time around  on Saturday after Cardiff Athletics had taken the honours in 2019.

A strong Swansea men’s team was led off well by Jonathan Butler and Morgan Davies, who eased them into the lead on the second leg.

Matt Rees maintained that advantage before handing on to Wales and Great Britain international Dewi Griffiths, who brought them home to victory with the fastest leg of the day, clocking a time of 16.11.

Griffiths, who is targeting a marathon spot at next year’s Commonwealth Games in Birmingham, was delighted to claim the title for Swansea, who won in a combined time of 66.52.

“It’s nice to regain our title again, we couldn’t get it back last year obviously, but it’s nice to get one over Cardiff again,” said Griffiths.

“It was a good atmosphere and it’s nice to have it dry. It was pretty windy and for about half a mile you were straight into the wind which wasn’t fun when you are starting to tire but it’s good to bring it home for Swansea.”

Griffiths said it was important for him to take part in the relays despite his busy individual racing schedule. “I’m always available for these races when I can.

“It’ll be nice to be on the podium with the boys later celebrating another Welsh title for Swansea.”

Cardiff Athletics finished second in a time of 68.49, while Pontypridd Roadents AC were third in 70.19.

Swansea’s women were given a flying start in the senior women’s race with Megan Carter-Davies running the second fastest leg of the day. They were kept in the lead by Kate Roberts before she handed over to Caryl Edwards.

Despite injury forcing the Commonwealth Games marathon runner to limp over the line, Edwards handed over to Olivia Gwynn, who brought Swansea home in a winning time of 80.24.

Gwynn said afterwards: “It’s so good to get back on the roads again – just very windy! It’s fantastic to win. We have a really strong squad and ran hard from the start. Meg took it out, took the lead for us and that made it quite a comfortable run for us

Like Griffiths, Gwynn was delighted to win as part of a team. “It’s more important than the individual races, because you’re doing it for each other.

“When you cross the line you can go up to each other and say ‘we did that’ rather than think I had my race and they had their race. It’s so important to me to take part in the road relays.

“The wind was horrendous, the first hill, it’s always a little bit difficult going up that, but the wind just knocks you it’s horrible, especially on the back straight.

“You turn around, it’s a slow incline and the wind just gets to you but you persevere and get around the bend – it’s okay then because it’s pushing you home!”

Les Croupiers were second in 87:33 with Alaw Beynon-Thomas bringing them home in the fastest individual women’s time of the day – 18:38. Swansea B were third in 88:05.

As in the seniors races Swansea Harriers were triumphant in both the Under-17 women’s and men’s races.

Also taking place were the Run Wales Relays, which attracted a field of 14 teams, with Campions Champions D taking the win.