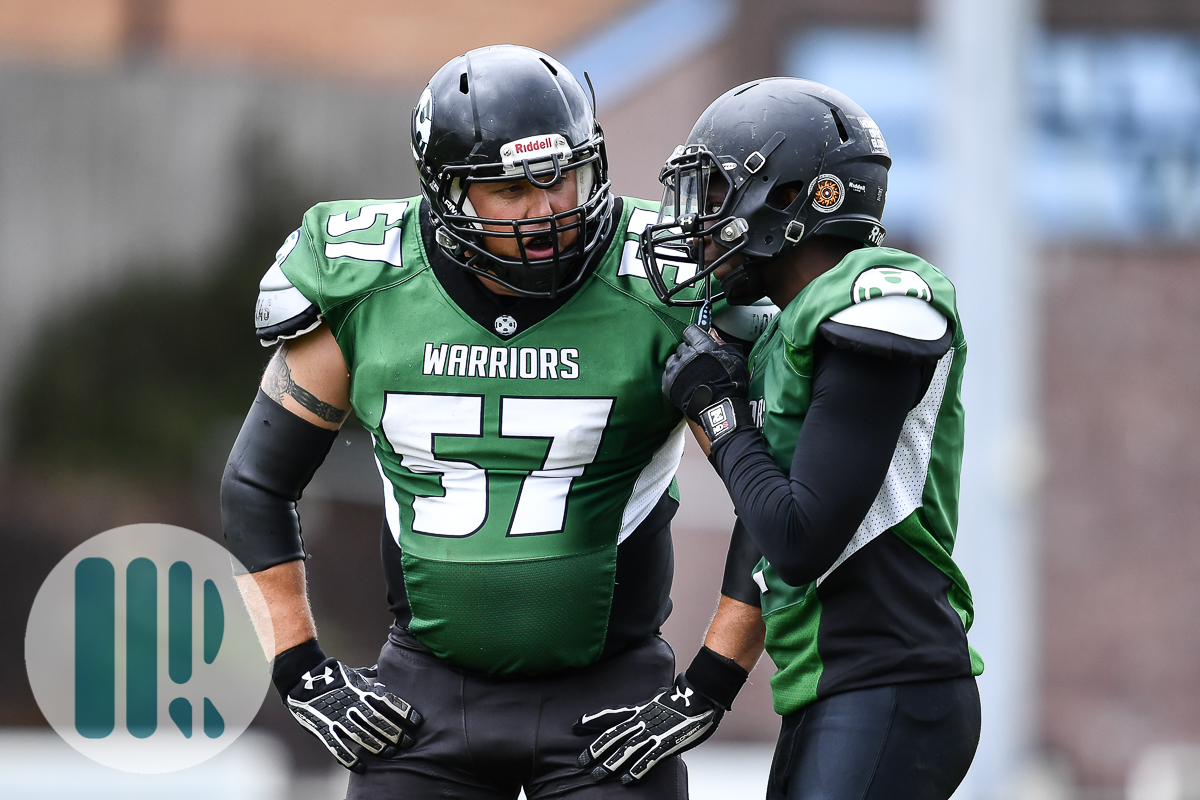 A dominant defensive performance has earned the South Wales Warriors a home semi-final showdown with London Blitz B in the British American Football Southern Conference play-offs.

The Warriors defence only gave up its first points with less than two minutes to play when the Apache kicked a 26-yard field goal for something to show from their visit to Llanharan’s Dairy Field.

Defensive lineman Andy Price celebrated his 42nd birthday by helping shutdown the Apache running attack which struggled to make any headway against the aggressive Warriors defence.

Britsol quarterback Fenn Trudigan, from his team’s first possession, showed his arm could move his offence downfield but the drive stalled on fourth down and one just inside the Warriors half.

On the ensuing possession the Warriors showed the importance of taking chances when they not only moved the ball but capped off the drive with the opening touchdown.

Home QB Dean Jackson hit receiver CJ Caparas for 23 yards, on third and 11, to move the ball into Apache territory. When the veteran took to the air again it looked as if the threat from the Warriors had been repelled when Luke Holloway intercepted and returned for a big gain.

But a pass interference penalty meant the interception wouldn’t count and the ball was returned to the home side at Britsol’s 17-yard-line. Two plays later the Warriors powerful running back Josh Hughes rushed in for the opening touchdown, which was converted by Mick Duncan.

Trudigan unleashed the power of his right arm as the Apache tried to level the scores but his huge bomb down the right hand side fell incomplete and on fourth and long punter James Baines attempted to run for a sneaky first down and was stopped just short.

The Warriors failed to capitalise after taking possession but were able to pin Bristol deep in their own half and defensive back Daniel Dacey thought he’d doubled the lead when he intercepted Trudigan and ran back, and across field, for what looked like a 40-yard score. But the interception and the score were chalked off as the Warriors had lined up off-side.

The Apache were again forced to punt and Baines did well to control a poor snap in his own end zone. Unable to punt he took off but was forced out at his 11-yard line from where the Warriors took possession and fed the ball to Hughes who crashed over from short yardage to start the second quarter with the Warriors 14-0 up once Duncan added the extra.

The hosts showed their aggressive approach, as they have so often this season, by surprising their visitors with an on-side kick that was recovered by Bevan Murphy. Jackson looked deep left as the offence returned to the field but was picked off by Hayden Lee.

As the second quarter wore on the Warriors continued to move the ball with Chris Rees gaining the yards on the ground but a series of penalties pushed the home side back when they were in striking distance and Duncan was called on to try a 35-yard field goal which just sailed wide.

Trudigan’s arm again got his team moving late in the second quarter but the half-time whistle stopped the most promising Apache drive since the opening possession.

Jackson came out firing to start the third quarter hitting Duncan for 53-yards down the left but around half of those yards, gained by the Irishman after the catch, were scratched off for an illegal block in the back. But the QB was able to hit receiver Michael Hiles, racing towards the posts, for a 25-yard touchdown which Duncan converted.

The Warriors completed their scoring shortly after the start of the fourth quarter when running back Daniel Abruzzese swept in from nine yards with Duncan adding the additional point.

Bristol finally got their points with less than one-and-a-half minutes to play when a poor snap sailed past Warriors backup QB Matt Morris which was recovered by the Apache at the home side’s 20-yard line.

Trudigan was unsuccessful with three shots at the end zone but Baines converted from 26 yards for a small consolation.

Warriors head coach Geraint Roberts praised his defence. He said: “I’m pleased at the result though we left a lot of points on the field.

“It was a good defensive performance not to conceded a touchdown in the play-offs and we just shut their run game down. Our two defensive captains, James Henderson and Nick Yewbery, both led from the front and Andy Price on his birthday, led the defence.”

His opponent from the Apache, who are a feeder team for the Premiership side Bristol Aztecs, said the seventh seeds had always expected a strong challenge from the second ranked Warriors who recorded a 21-46 regular season win in Bristol.

Head coach Chris Taylor said: “We knew it would be a tough game based on our previous fixture at the start of the season. On defence we felt we played quite well but we couldn’t get enough going on offence. Obviously we wish the Warriors the best of luck for the rest of the play-offs.”

The Warriors host London Blitz B at Llanharan, in the Southern Conference semi-final, on Sunday, August 18 (2.30pm).