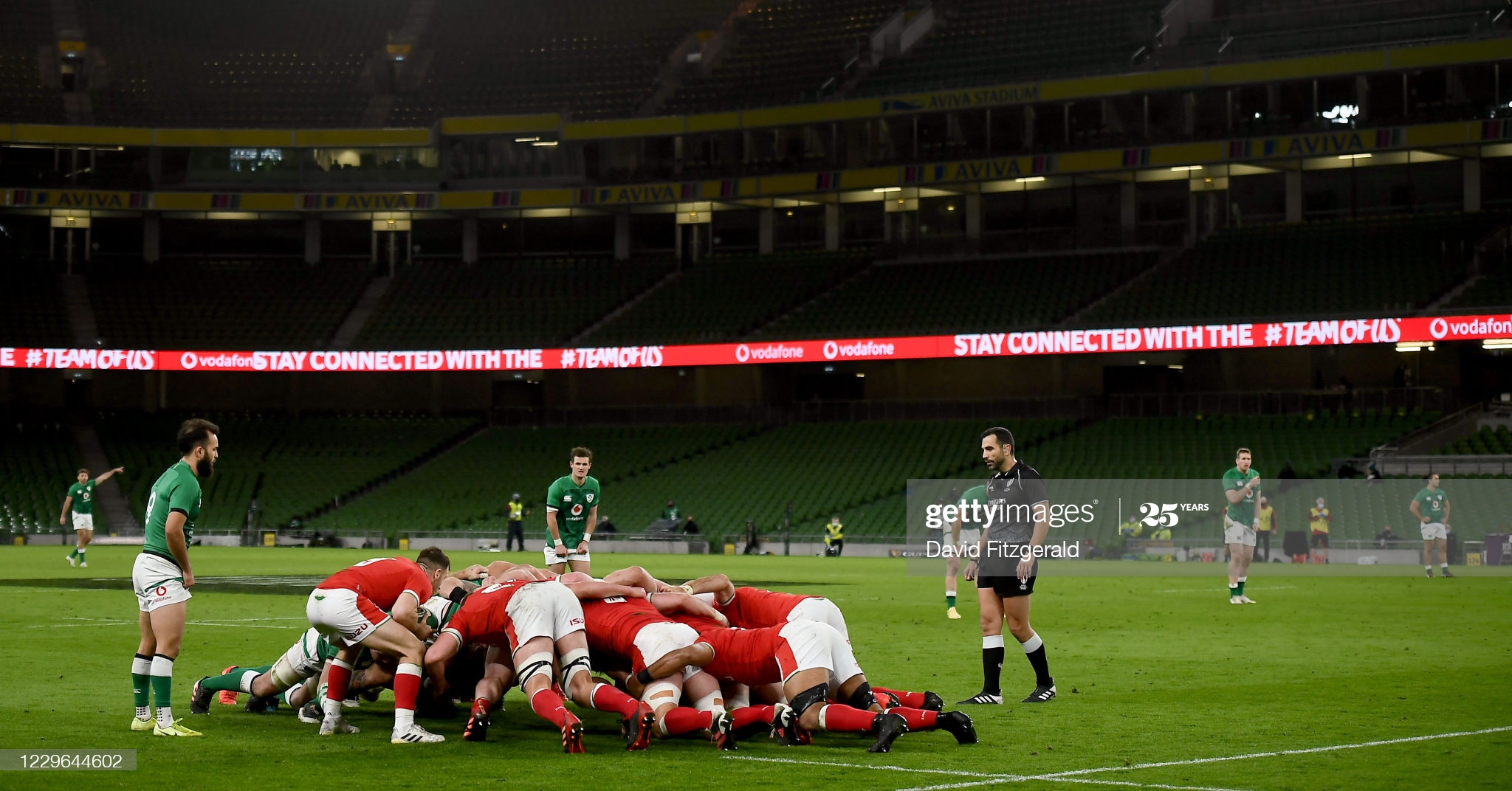 Scrum on down: Wales were guilty of collapsing scrums against Ireland. Pic: Getty Images.

Wales prop Rhys Carre got the old crooked stick last weekend, hooked even before half-time after Wales had conceded a string of scrum penalties against Ireland. But for Harri Morgan, it’s not props who should be getting hooked it’s the current laws themselves.

Take a minute to Google Warren Gatland’s record as coach of the Waikato Chiefs in the inaugural Super Rugby Aotearoa.

A decent coach in a fairly ordinary patch of form. It happens. Be patient with the process, though, and we can have a more educated and evidenced based conversation in six months’ time.

The positives for Wales last Friday night were few and far between. The 10 minutes after the interval were indicative of the accuracy which is drowning development.

Penalty kicks, both at goal and for touch, fell short of the target, a pass from Justin Tipuric went awry with Wales having set a rare attacking platform in the Irish 22.

All was not lost and the ensuing scramble for possession saw the visitors awarded a centre field scrum on the Irish 22 – prime position.

The only positive from a frustrating night at scrum time was the lack of a ‘heave’ option on the list of crowd noises.

Rhys Carre had a night to remember. I mean it. To forget it would be to waste a learning opportunity he wouldn’t be getting on a Monday night at Rodney Parade.

Much has been made of the SOS – Save our Scrum – decision to send Wyn Jones out to replace the Cardiff Blues prop, just moments before the interval.

It was pragmatic. There was a situation.

The outcome of which would have a significant bearing on whether Wayne Pivac would be talking come back or consolation as his players chugged their electrolyte mocktails.

If the message from the top is weighted in favour of patience and process then this was a decision driven by short term outcome. Ireland failed to score – decision vindicated?

Time will be the judge of that. Welsh Rugby has plenty of experts in calling out a problem and looking for the quickest solution.

The challenge for a coach is balancing the immediate situation and a talented young individual in a way that ensures the quick fix doesn’t come at the expense of a player who will do far more good than harm over his career.

I would imagine it is a point of great frustration for the front row union that most onlookers assess their performance in binary format. Did they push or were they shoved?

A dominant scrum, or a scrum perceived to be dominant, can be a penalty machine, a match determinant. See the Rugby World Cup final.

Is this really its purpose?

When the referee blasts for a scrum penalty, there is simultaneous split of ecstasy and exasperation on the faces of the six individuals who spearhead the battle.

Like boxers after a split decision the victor rushes to the adulation of their corner, convinced their dominance was never in doubt.

The defeated opponent shakes their head, certain they have been undone not by the opponent, but by the perception of the official.

It is difficult to reconcile the importance of the scrum with the subjective nature of its adjudication.

One of those variables has an easier fix than the others, though.

No, there is not a hoard of scrum experts ready to be parachuted in as referees. Although a ‘Scrum Tzar’ as VAR might improve matters.

But it’s time to shift the motive and diminish – without removing – the importance of the scrum.

Fundamentally, this is a means of restarting the game. It’s a method for handing possession from one side to the other after a mistake.

How often do we see the team that makes a handling error subsequently rewarded with a penalty during the ensuing re-start?

Is this in the spirit of the design?

Is it conceivable that perceived scrum dominance might be such that it entices an error to be illegitimately conjured up just to get a shot at winning a penalty from the subsequent scrum?

Not in a sport that is such a bastion of Corinthian spirit? Yeah, right.

This is not an attempt to marry Union with League, where the scrum might bare a family resemblance but no other personality traits with the far more complex Union equivalent.

Instead, I am suggesting the game would benefit if players didn’t pack down with the motivation of obtaining the ultimate outcome for their team – a penalty kick.

If there was a maximum shunting distance, say a metre and a half, the dominant scrum would still benefit from providing a front foot attacking platform.

At present, once a scrum begins its march, disintegration and a penalty is the only conceivable outcome.

Calling halt after a set distance would increase ball in play and encourage teams to capitalise on their “scrumentum” – a scientific measure of scrum momentum – by keeping the ball in hand.

I would say it would enhance entertainment, but recognise the subjectivity of such a statement.

Reducing the volume of collapsed scrums would certainly simplify the game for the newcomer.

The Irish scrum taking Wales to the dark place. You just love to see it. #IREvWAL pic.twitter.com/LFGI4m3xG6

Again, the relevance of which will depend on the extent to which you value market expansion.

The sanction for scrum offences could be reduced to a free kick with a penalty only awarded against repeat offenders – a two or three strike system.

The objective of the rising sanction is to give a struggling scrum a choice.  Either concede the penalty – giving the opposition a shot at three points or a significant territorial advantage, or take the hit, quite literally, and minimise the loss by staying up but going back.

A no brainer, if pragmatism can overcome pride.

Oh, and no option for re-running the scrum from the free kick. Tap n’ go. Speed, speed, speed.

I’m not suggesting any scrum will be comfortable yielding yards. The locking of heads must still represent a battle within the war, it can provide an edge, but a success strategy which places significant weight on the scrum as a tool for penalty derived domination would cease to be viable.

As for referee perception, inconsistency and randomness. It would remain, but the scope for it being a decisive factor in the outcome is inherently reduced.

Hopefully, even if you don’t agree with my means, you can acknowledge this as an improvement.

Hate the answer by all means, but if you’ve come this far you must see value in questioning whether one of the components that differentiates rugby union has become too prominent in the differentiation of opponents.