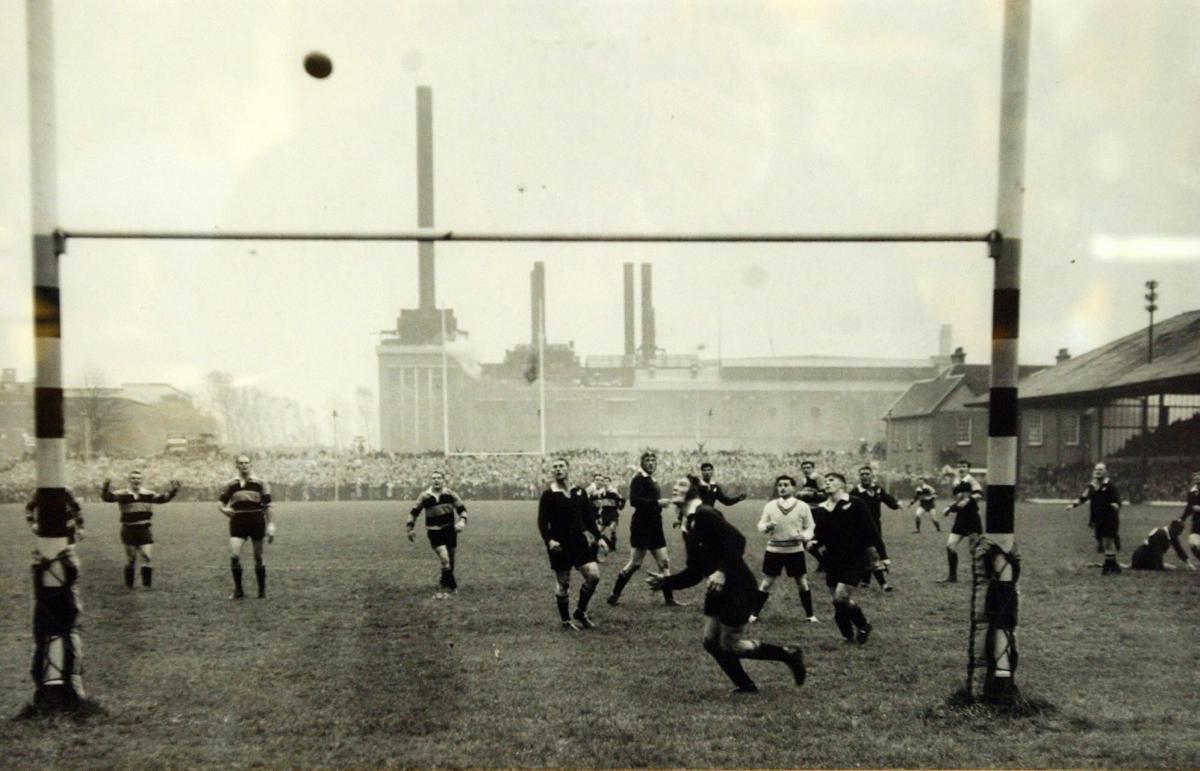 Wales take on New Zealand on Friday, aiming for their first victory over the All Blacks since 1953. But 10 years after that famous day, Newport managed the same feat – exactly 56 years ago this week. Josh Thomas spoke to the hero of that gritty 3-0 win, Dick Uzzell, whose drop goal as a 21-year-old earned him a place in history.

This Saturday’s World Cup final will see England take on South Africa in the repeat of the 2007 final, when the Springboks beat England 15-6 at the Stade de France.

Eddie Jones’s men will head into the final having just beaten New Zealand, bringing to an end their 12-year unbeaten run in the competition.

The three-times winners and back-to-back champions have an illustrious history and 56 years ago – in October 1963 – were on a 36-game tour of Great Britain, Ireland, France and North America.

The Kiwis had just beaten Oxford University and Southern Counties in their first two games, then travelled to Rodney Parade on the 30th October to take on Newport.

“They were massive,” he said. “I went to see the previous All Blacks and Bob Scott was fullback for them. My Uncle took me and I was standing on a box to watch them and they were impressive.”

And centre Uzzell recalls, with excitement, how much he was looking forward to playing New Zealand.

“The All Blacks are a dream team to play against. I’m from a little village (Deri) in the Rhymney valley. I had gone to St Luke’s College, Exeter and I had played for the Wales secondary schools.

“I thought, I’m not too bad a player and then I got into the Newport team. I used to come back on Wednesdays to play in midweek games but I had to play for the college on a Saturday. So, this was a momentous game for me.”

Uzzell’s cousin Brian Price, whose mother was sisters with Dick’s mother, was playing for Newport at the time and recommended Uzzell, who was playing for Cross Keys, to come to the club as a replacement for Welsh international centres B J Jones and Gordon Britton.

“Newport at the time had two international centres,” said Uzzell.

“They would be rested for a few games and so they were looking for a replacement for those two. I decided to go to Newport to have a trial at the start of the 1961/62 season.

“Unfortunately. Gordon, who played for Wales in the centre, broke his wrist in the third game of the season. I came in then to play a few games before I went to St Luke’s.”

By the time the game against the All Blacks arrived two years later, Uzzell had established himself in the starting line-up, although he didn’t expect anything but a Kiwis’ victory after they had picked up six wins and two draws from their opening 12 games.

“Newport weren’t playing well that season and before we ran out we said, ‘look lads – we have got to make the best of it.’

“When the game started our forwards were able to manage the New Zealand forwards, even though they were ferocious.

“Number eight Glyn Davidge went down on the ball time and time again, because the New Zealanders were famous for their forward rushes. Davidge went down and killed the ball and stopped this momentum, so we were able then to retain possession.”

Now 77, the retired bank executive admits he almost missed the game with injury.

“I pulled my hamstring a few weeks before the game down in St Luke’s in Exeter and fortunately I took leave and came home. Gerry Lewis, the physio, worked magic on me and got me fit for the game.”

Another player who almost missed the game that day was prop forward David Jones.

Jones, who worked as a draughtsman at South Wales Switchgear in Pontllanfraith, was told by his boss, Mr Alderson, he couldn’t take the day off work.

Uzzell recalls: “David went to his boss and said ‘can I have the afternoon off? Newport are playing the All Blacks’. And his boss refused. Luckily on that day the boss was ill, he wasn’t in, so Dai turned up and played.”

The crucial opening score of the game came in the 17th minute, following a great team move and Uzzell recalls how his moment of history came about.

“Dai Watkins was the outside half and he had a habit of running, instead of passing the ball. He ran across field himself because he was very quick.

“He ran across the two centres, myself and Brian Jones, and passed to Stewart Watkins on the wing. Stewart cross kicked to the middle of the posts and our forwards then won the ball.

“Bobby Prosser started to look for a gap and went left, I went with him and then Bobby passed to me.

“All of a sudden I saw three All Black forwards looming up on me and it was just pure instinct that I dropped the goal.”

As the two teams left for the interval, Uzzell’s drop goal separated the two sides and he still remembers the team talk Price made during the break.

“We got to half-time and Price said. ‘Look, chaps, we’ve gone halfway and we are in front. We are winning 3-0. Now you’ve got to go again for another half and you will be immortal.

“I think we stared to believe at half time that we could win and that was the result.”

Newport’s Ray Cheney and Dennis Perrott both had chances to extend the score, but Uzzell’s solitary three points secured the victory.

“It was just pure bad luck that we didn’t get more points. Cheney hit the upright with a penalty, and Perrott knocked on, on the wing, as he was diving over.

“It could have been a bigger score, actually, but as it happened I dropped the goal and my name goes down in history.”

After defeat to Newport, tour manager Frank Kilby’s All Blacks went undefeated during the rest of the tour.

New Zealand picked up 32 wins out of 33 games. The only game they failed win was a 0-0 draw with Scotland, and Uzzell admits they were supporting the tourists.

“As the tour went on we were rooting for the All Blacks, not the other English teams, and of course when they went unbeaten, you look back at the game. It was one of those games that you only play once in a lifetime.”

Newport’s place in Welsh rugby history is assured as they became the third club side to beat the All Blacks, joining both the Swansea (1935) and Cardiff (1953). Llanelli would join this select group in 1972.

“Looking back, our win over them was a tremendous occasion. When you look back and you look at the games that New Zealand have played, the teams they have beaten, it is very rare that they get beaten.

“They were a national side and when they came on tour they were like professional players, because they trained every day. The history of Welsh club rugby was amateur in those days.

“You went to work and then you played for the fun of it.”

After the game, Uzzell went back to college to continue his studies of Physical Education. After arriving back in Exeter, he was summoned by the principal, who offered him a sherry and asked him about the game.

“For a club side to beat a national side was a tremendous occasion,” added the five-times capped Welsh international.

“It won’t be forgotten and it won’t be repeated now because you’ve got the regional sides rather than the clubs from the old days.

“It used to be Cardiff, Newport, Swansea, Llanelli and they were the four big teams that played any touring side.

“It was a special day and it will always be remembered.”

One thought on “Don’t Have Faith In A Welsh Team Beating The All Blacks? Dick Uzzell Does . . . 56 Years On From His Famous Day”