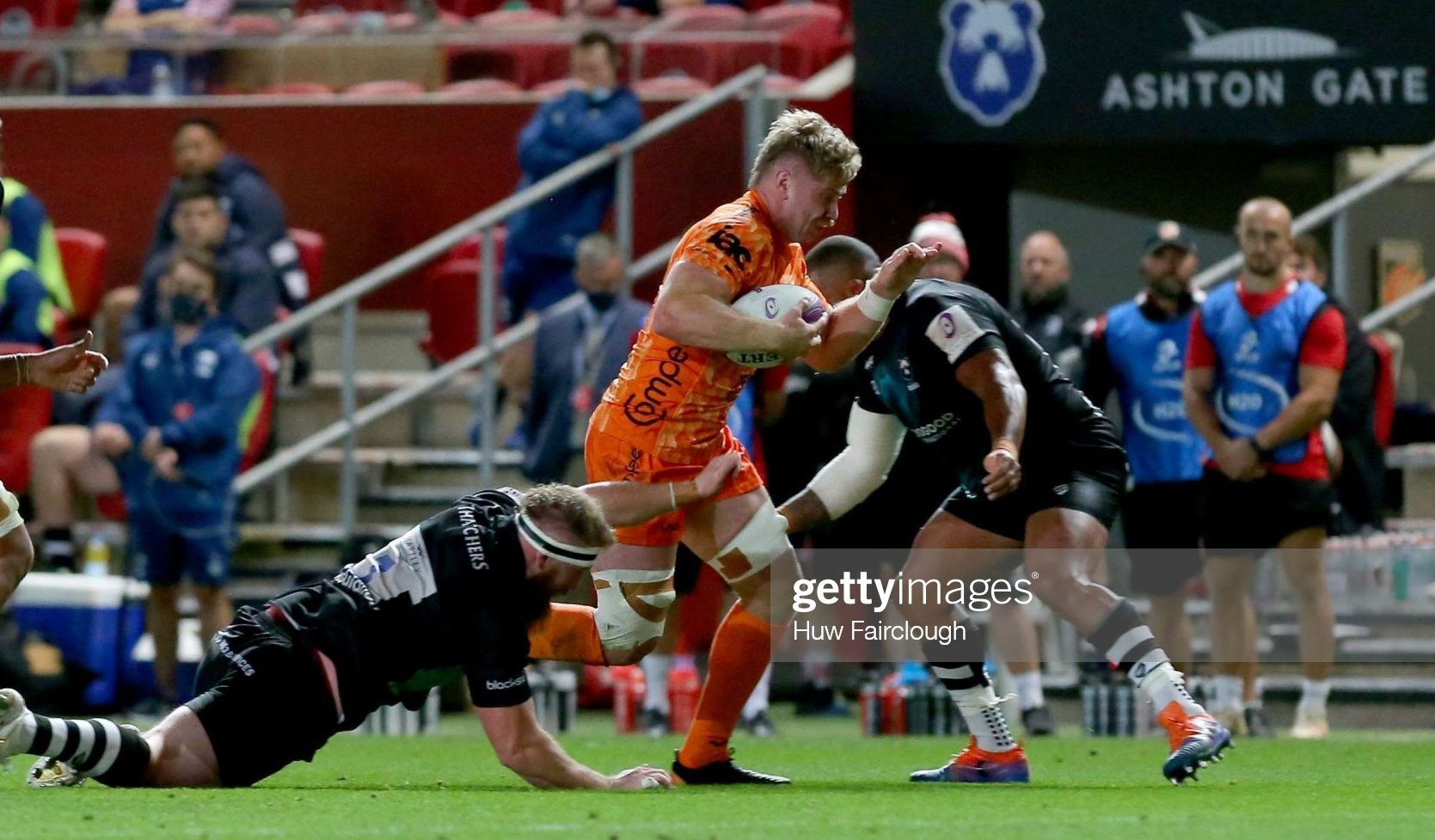 Aaron Wainwright in action for the Dragons. Pic: Getty Images.

Jingle, jingle, the Welsh festive derbies are here. They kick-off today at Rodney Parade where the Dragons host Cardiff Blues. The home side are looking for their fourth straight Guinness Pro14 victory and Aaron Wainwright is looking to earn a first, famous derby win as he told Graham Thomas.

Aaron Wainwright insists the Dragons can get the Dean Ryan revolution back on track over the festive Welsh derbies.

The Wales flanker is desperate to get stuck into the Cardiff Blues in the Boxing Day clash at Rodney Parade after being forced to miss his region’s last two matches.

Wainwright was one of half a dozen Dragons players made to isolate and unavailable for the Heineken Champions Cup ties against Wasps and Bordeaux-Begles after links to positive tests for Covid-19.

The Dragons lost both ties, having previously found momentum with their first back-to-back away victories for eight long years.

Now, comes an opportunity to extend their Guinness Pro14 run to four straight victories against their fiercest enemies – in a match that is live on S4C.

“I think the way Dean is going about things and what we’ve been building of late at the Dragons is fantastic,” says Wainwright, who earned his 14th Welsh cap against Italy at the start of this month.

“We had two away wins on the bounce, which was the first time we had done that since 2012, and we’ve definitely been heading in the right direction this season.

“Then, came all the disruption before Europe. I think if things had been different we could have challenged a lot better in those games, but we are looking forward again now to pushing on with these Christmas derbies.”

Wainwright made his Dragons breakthrough under the region’s previous head coach Bernard Jackman. His energy and ball-carrying ability in the No.6 shirt saw the 23-year-old earn a rapid rise into the Wales ranks where he became one of the squad’s stand-out performers at the 2019 World Cup.

In an injury disrupted remainder of the campaign, his progress seemed to stall. But now the former Newport County footballer believes Ryan – whose own playing career included six caps for England in the back row – is proving a big influence.

“I’ll always be very grateful to Bernard for giving me my chance with the Dragons and having the trust to select me,” says Wainwright.

“But my relationship with Dean is a little bit different because I’m a more experienced player now.

“We have a had quite a few conversations where he has sat me down and helped me understand my position a bit more. He knows the role and that has really helped me develop that side of my game.

“In the last few weeks Dean has been pushed to make selections of young players. He’s not afraid to do that and it’s similar to how I got my chance, through injuries to others.

“The young boys at the Dragons are getting their opportunities and it’ll be a great opportunity for them in these Welsh derbies. That’s the silver lining of losing some others.”

In his three years in a Dragons shirt, Wainwright has played in five derbies against the Blues and although some of those contests have been tight, he is yet to finish on the winning side.

If the Dragons are to break that sequence – a losing run that goes back 10 games to 2015 – then they will have to do it in the absence of the Rodney Parade roar as crowds continue to be banished under current restrictions.

“As professional rugby players, we are expected to perform no matter what the circumstances are,” adds Wainwright.

“In the games I’ve played against the Blues at Rodney Parade, the crowd has been amazing.

“Being so close to those fans in the Bisley Stand, when you run out of that tunnel, you really feed off that energy – especially against the Blues.

“But this time we are going to have to dig deep and find other motivations to drive us. It’s a good rivalry. We know most of their guys very well and you want to get one up on them so they can’t come at you the following day with anything to say.

“We know they are a good side at present. They are very good at the breakdown and they’ve got a few backs there who are fast and very skillful.

“I’ve got good friends there in Cory Hill and Tomos Williams, so I’m pretty desperate not just to play after missing out on the European matches, but to beat them.”

Wainwright will have spent Christmas Day at home with his girlfriend, ahead of the game. The presents from his wider family -which includes three sisters – will have been delivered and left at the door.

“It’s been a strange time to have been a professional rugby player. We can’t take any risks. I didn’t see anything at all of my family for about eight weeks while I was in camp with Wales, so it’s been hard.

“But I think the low numbers of positive tests we’ve seen across the whole of the regions has been a testament to how all the boys have been very sensible.

“Thankfully, we’ve now got a big match to concentrate on, come Boxing Day.”

Live coverage of the Guinness PRO14 rugby derby match between Dragons and Cardiff Blues, which is being played at Rodney Parade. Kick off 3.00pm.