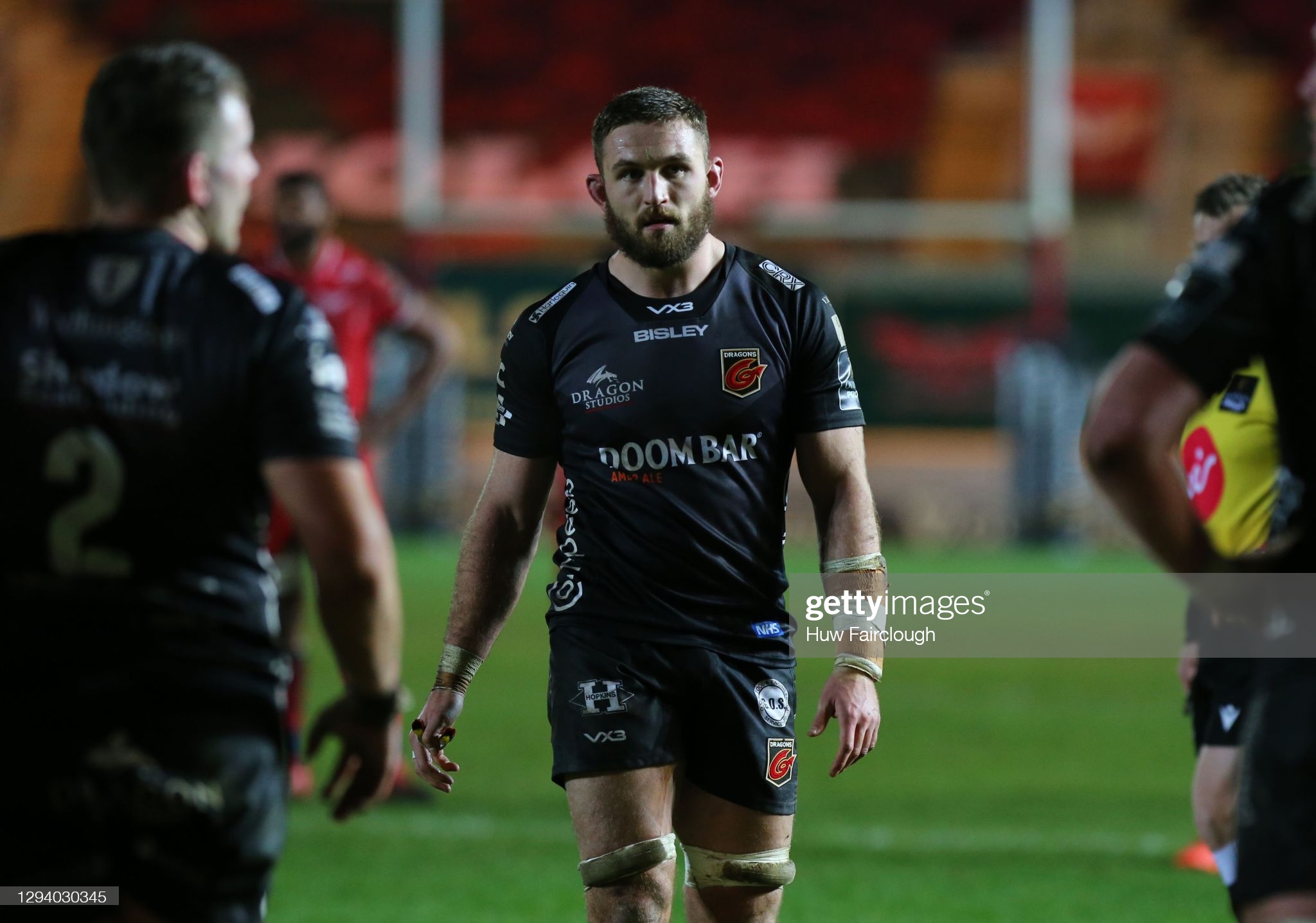 The Dragons host Northampton in the European Challenge Cup on Saturday evening, looking for a fourth victory in five games as well as a place in the tournament quarter-finals. That surge has produced confident vibes at Rodney Parade, as skipper Harrison Keddie tells Graham Thomas.

Harrison Keddie is planning to bring Dan Biggar back down to earth with a bump when the Wales outside-half makes a return to Wales on Saturday night.

Just a week after feeling the high of securing the Six Nations title, Biggar is set to make his return to Northampton colours when they face the Dragons in an intriguing European Challenge Cup last 16 tie.

The match – which is live on S4C – is also likely to feature the Dragons’ own Welsh contingent of Elliot Dee, Leon Brown, Aaron Wainwright and Nick Tompkins, all of whom returned to action for their region last weekend in the Guinness Pro 14 closer against Edinburgh.

Biggar should also have played for Saints, but was able to enjoy a celebratory Saturday instead after being a late withdrawl from the Northampton side that thrashed Worcester, 62-14.

With two weeks’ rest since he played in the Grand Slam near miss in Paris, but a spring in his step as a trophy winner, Biggar should breeze into Rodney Parade in confident mood.

But Dragons skipper Keddie insists it’s not just Biggar who will possess the feelgood factor.

“Dan will be coming out of that Welsh environment on a high, so that’s going to be a big challenge for us,” says Keddie, who is set to be part of an in-form back row alongside Wainwright and Ross Moriarty.

“We all know Dan is a top performer. He’s in that mould of a general at half-back, who drives his team across the field.

“He’s been doing it for a very long time, he’s performing well and he’ll be full of confidence coming out of that Wales squad.

“But we have got boys who have also come back from the Wales squad on a high, so things should even themselves out.

“We also have Sam Davies as our 10 and he’s been a quality operator. He’s very good at what he does and he brings a great level of detail and a calm head to the environment, which is important for a fly-half.”

Even beyond the Wales warm glow, the Dragons should be approaching this clash in justifiably upbeat mood.

Not only have they won three out of their last four games – against the Ospreys, Glasgow and Edinburgh – but they ran Ulster close and their performance levels have been impressively consistent.

They are also back at their real home of Rodney Parade, where the playing surface has been rested and repaired while the team temporarily relocated to the Principality Stadium.

“We have really ripped into things this week and we’re looking forward to the game,” adds Keddie.

“We have definitely been improving. We are all excited to keep that going. But we all realise that Northampton are a very strong side, with a strong pack and dangerous strike runners who can hurt you if you don’t deal with them.”

The Dragons are vastly improved from the side that lost their two previous European matches this season, when defeats against Wasps and Bordeaux-Begles formed part of an eight-match losing sequence.

Those two European reverses were in the Heineken Champions Cup and when their other two pool matches were postponed due to Covid-19 measures, the Dragons found themselves switching to the Challenge Cup after both European tournaments were revamped to take account of the fragmented campaign.

Keddie admits: “It was disappointing because we only played two games and then the other two were cancelled. I was gutted because I didn’t get a chance to play in those two games.

“That’s why we’re excited by this game – a different competition against opponents from a different league.”

The 24-year-old Keddie has been one of the most consistent performers for the Dragons this season and could soon be poised to fulfill the promise he showed three years ago before injuries scuppered his progress.

He appeared on the fringe of international honours, but says watching his fellow Dragons earn success with Wales has been motivating rather than frustrating.

“Two years ago, I would have seen it as more frustrating because I had so many injuries that my career became stop-start.

“But at the moment, I just feel I can keep improving. I am just concentrating on trying to do my job for the Dragons.

“If that gets me recognition, that’s great. If not, then I’ll keep looking to improve in every way I can.”

Saints have had some notable wins in recent weeks – including over Exeter – but they also suffered losses last month to both Harlequins and Bristol.

“Biggs is just brilliant for us,” says Vesty. “He always brings energy to the group and drives standards. That just the type of guy he is.

“It’s a testament to him that he can come out of just winning the Six Nations title and yet the next game is always the biggest thing. He just brings so much focus and energy to the squad.”