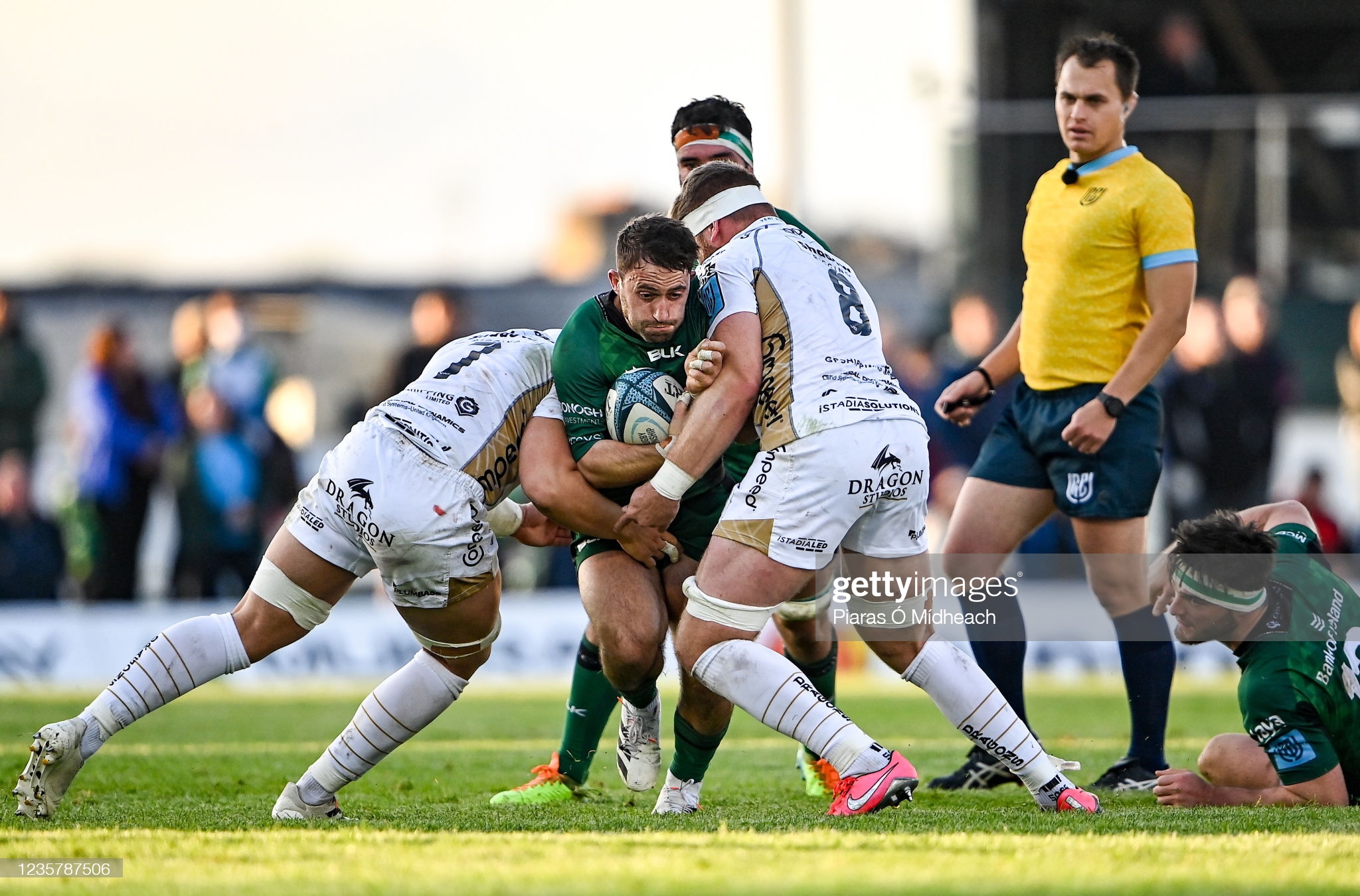 Caolin Blade of Connacht is tackled by Taine Basham, left, and Aaron Wainwright of the Dragons. Pic: Getty Images.

Dragons’ man of the match Taine Basham admitted the frustration of losing to Leinster at Rodney Parade the previous weekend spurred his side on to notch their first win in Ireland since 2015.

The 35-22 bonus-point victory over Connacht in Galway was not only the Dragons’ first competitive victory of the season, but also their first over Irish opposition since they beat Connacht 21-8 on 15 September, 2017.

There had been 21 defeats and a single draw since then, but now the long wait is over after they triumphed at the Sportsground for the first time in 17 years.

“Last week was very close against Leinster and we felt we could have won that game. So, we came to Connacht feeling a little bit frustrated and we are so happy to get a win out here,” said Basham, who was starting his first game of the season.

The Welsh international back row man put in a magnificent performance in the No 7 shirt that will no doubt have attracted the attention of Wales head coach Wayne Pivac ahead of the autumn series at Principality Stadium.

And with Cardiff’s British & Irish Lions star Josh Navidi picking up what appeared a serious injury in his region’s defeat to the Bulls the young Dragon could be in line for a call to face the All Blacks, Springboks, Fijians and Wallabies later this month.

From the outset this season the Dragons made it a priority to end their awful record against Irish sides.

Yesterday’s result had been coming for a while. Challenge now is to build on it.

Also how good was Taine Basham? Must be a contender to start v NZhttps://t.co/uc8o3kXpAI

As well as being pleased with the performance of Basham, Dragons director of rugby Dean Ryan was also delighted to see his team finally convert a good performance into a much needed victory – the first on Irish soil after 24 consecutive defeats dating back to a 16-14 win over Leinster at the RDS on 15 February, 2015.

“I’ve got to keep supporting them and keep learning from them. Sometimes that learning hurts, like last week, but today they’ve got great reward and I’m really pleased for them,” said Ryan.

“I wasn’t aware of the statistic that we hadn’t won here since 2004. We needed to get something on the board in terms of some reward for the games we’ve been in and last week’s performance.

“This isn’t normally the place you come and do that. We came with a plan and we thought we could hold the ball for long periods of time and that would offer us opportunities.

“Twenty minutes after half-time I thought we were really clinical. The first half was into a wind and it is up a slight hill.

“We wanted to see out those first 40 minutes and hold onto the ball for as long as we could. I told them ‘don’t make any silly errors’.

🐉 @dragonsrugby‘s Taine Basham talks about his team’s happiness at getting their first win of the season, and their style of play in doing so

🗣️ “Our foundation is on running the ball, keeping the ball in our possession.”#URC #CONDRA pic.twitter.com/AkQ5LuAOgW

“To come out only a few points down after the break meant we could get down there with the wind behind us, put pressure on them and be clinical.”

Now Ryan’s army have to prepare for their first South African challenge of the season when the Stomers head to Newport on Friday night.

“Rodney Parade was great last week. Everybody think their fans are special, but last week the last 15-20 minutes were special and we are looking forward to going back there,” added Ryan.

“It will be really exciting to play South African opposition back at Rodney Parade. This win will have helped us.”

Ryan also had special praise for two of the try scorers in his back three, returning full back Jordan Williams and Wales wing Jonah Holmes.

“Jordan Williams coming back in offers us a great threat and his poise in key moments was crucial. The pace in our back three offers a real threat,” said Ryan.