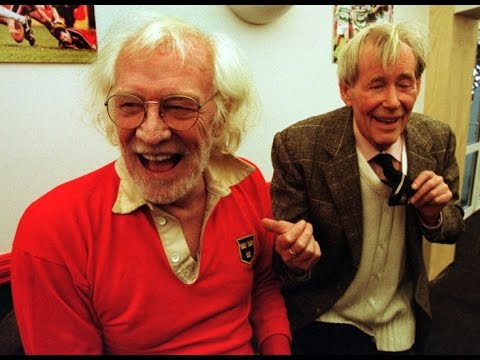 Richard Harris and Peter O'Toole at the 2000 Heineken Cup Final between Munster and Northampton.

Super Rugby may have returned to New Zealand – with crowds – but the activity of watching live top level rugby remains a distant prospect here in Wales. Owen Morgan has done all his fantasy teams, so he’s moved onto his fantasy fans.

Watching S4C’s highlights of the Super Rugby matches from New Zealand the other day, I started wondering when we would be able to enjoy similar scenes in Wales.

When would we be able to go for a pint on the way to the ground, sit amongst friends and celebrate, or drown our sorrows after a match?

With no immediate return to the stands and terraces to look forward to, this, unfortunately, is currently the stuff of fantasy.

So, in the same vein as many of us have whiled away an hour by picking our fantasy Wales XV, or best ever Lions team recently, I started to select some fantasy companions for a trip to a fantasy rugby match.

The rules are simple. If you could invite any three people, alive or dead, to go to a rugby match with, who would they be and where would you go?

So, how would you fancy spending an afternoon at the old Lansdowne Road with this trio: Richard Burton, Peter O’Toole and Richard Harris?

What an experience that would be. Three rugby-loving, hell-raising actors, who would certainly have some tales to tell and wouldn’t be shy when it came to getting the drinks in after the game.

It would be fun hearing Connacht supporter O’Toole – famous for his role as Lawrence of Arabia – teasing Harris about the apparent jinx suffered by his beloved Munster when watched by the fiercely proud son of Limerick.

Legend has it that when Harris watched, Munster lost. Apparently he even received a letter from a seven-year-old member of the Red Army, imploring him not to attend one vital match.
The letter was addressed to Professor Dumbledore, Harris’s character in the Harry Potter films.

It read: “You are a very good actor, I have the video of Harry Potter. Please, please don’t come to the match. But if you really must come, could you wear your cloak of invisibility.”

In an interview after Harris’ death, O’Toole joked of his close friend: “Harris had to die before Munster could win the Heineken Cup.”

The pair, along with their great friend and drinking partner Burton, shared many long hours together watching rugby, and even longer hours drinking.

Tales of their alcohol consumption are legend.

O’Toole once said: “We were silly and young and drunken and jumping up and down and making complete clowns of ourselves.

“I did quite enjoy the days when one went for a beer at one’s local bar in Paris and woke up in Corsica. Richard Harris woke up in Marseille once.

“A little while ago, Richard and I were at a rugby match together, and he said, ‘Ah, Jesus, I miss wakin’ up in places that you’d never knew you had been to.

“I used to love going to the shop to buy a packet of cigarettes and not coming back for a month’. Two old codgers trying to watch a rugby match and stay sober!”

“In Cardiff I always seemed to end up with a mob of drunken Welsh doctors or medical students – the maddest of the mad, frankly – down Tiger Bay, drinking Brains Skull Attack, eating kebabs, stepping over broken glass and vomiting profusely every hour or so.

“Then I would travel back to Paddington shoulder to shoulder in the buffet bar drinking neat vodka out of a paper cup, while somebody else was sick over me.

“I love their anthem, though, it leaves me a weeping, emotional mess but, strangely, I feel a better, cleansed, person on its conclusion.

“Singing – optimistically in the shower on match morning, in unison at the ground or drunkenly in the pub – is the great cement that binds the championship together.”

Harris’s connection with rugby went far deeper than watching the odd game with his acting chums and starring as a rugby league player in the hit 1960s movie This Sporting Life.

His passion for rugby, and Munster rugby in particular, burned brightly in an article entitled “Limerick Rugby Full of Heroes” which he wrote in the Daily Telegraph on the eve of the 2002 Heineken Cup Final against Leicester.

The article begins: “How do you explain a love affair? It belongs to the heart, not the head. Something to be embraced, or spurned – there can be no middle ground. There are those who stare blank-faced when I talk of rugby but others instantly understand my breathless enthusiasm and stomach-churning anxiety. We are the lucky ones.”

The article continues: “I attended Crescent College, played in two Munster Schools finals and represented Munster Schools and Munster Under-20 – I still wear that very red shirt and intend to be buried in it, I have left instructions – before TB struck and I discovered books, women and a hitherto unsuspected, or submerged, desire to act and show off.

“I would give up all the accolades – people have occasionally written and said nice things – of my showbiz career to play just once for the senior Munster team.

“I will never win an Oscar now, but even if I did I would swap it instantly for one sip of champagne from the Heineken Cup.”

Harris’ passion for rugby was one undoubtedly shared by his namesake Burton, who was, of course, born near Port Talbot.

Aberavon RFC’s official website bears the following quote from the acting great: “To that town, Aberavon and its rugby team, I pledge my continuing allegiance. Until death.”

In a similar vein to Harris, Burton, who was nominated for seven Oscars without ever picking up the famous award, once said: “I would rather have played for Wales at Cardiff Arms Park than Hamlet at the Old Vic.”

When his acting talent overcame his rugby playing ambitions, Burton indulged his love for the game by writing about it, often with great humour.

He would write about “a Welsh woman from Taibach who before a home match at Aberavon would drop goals from around forty yards with either foot to entertain the crowd . . .”

And “a one-armed inside half – he’d lost an arm in the First World War – who played with murderous brilliance for Cwmavon for years when I was a boy. He was particularly adept, this one, at stopping a forward bursting through from the line-out with a shattering iron-hard thrust from his stump as he pulled him on to it with the other.”

Recalling his last game of rugby, against a team whose players had recognised him as a famous actor, Burton wrote: “. . . I was elbowed, gouged, dug, planted, raked, hoed, kicked a great deal, sandwiched and once humiliatingly taken from behind with nobody in front of me when I had nothing to do but run fifteen yards to score.”

He recalled painfully: “I was playing Hamlet at that time at the Old Vic but for the next few performances after that match I was compelled to play him as if he were Richard the Third.”

He added: “The punishment I took had been innocently compounded by a paragraph in a book of reminiscence by Bleddyn Williams with whom I had played on and off (mostly off) in the RAF.

“On page 37 of that volume Mr Williams is kind enough to suggest that I had distinct possibilities as a player were it not for the lure of tinsel and paint and money and fame and so on.

“Incidentally, one of the curious phenomena of my library is that when you take out Bleddyn’s autobiography from the shelves it automatically opens at the very page mentioned above.

“Friends have often remarked on this and wondered afresh at the wizardry of the Welsh. It is in fact the only notice I have ever kept.”

So, how about that? Just imagine sharing an afternoon at Lansdowne Road with three great rugby-loving raconteurs?

Then again, perhaps I am better off sticking to my regular rugby companions, especially when it comes to the after match refreshments.

Can you imagine being in a round with O’Toole, Burton and Harris?

I wouldn’t fancy my chances of ringing my wife and telling her I’d just woken up on an island in the Mediterranean after an afternoon at the rugby in Dublin.

Cork I might just get away with, but Corsica? Probably not.