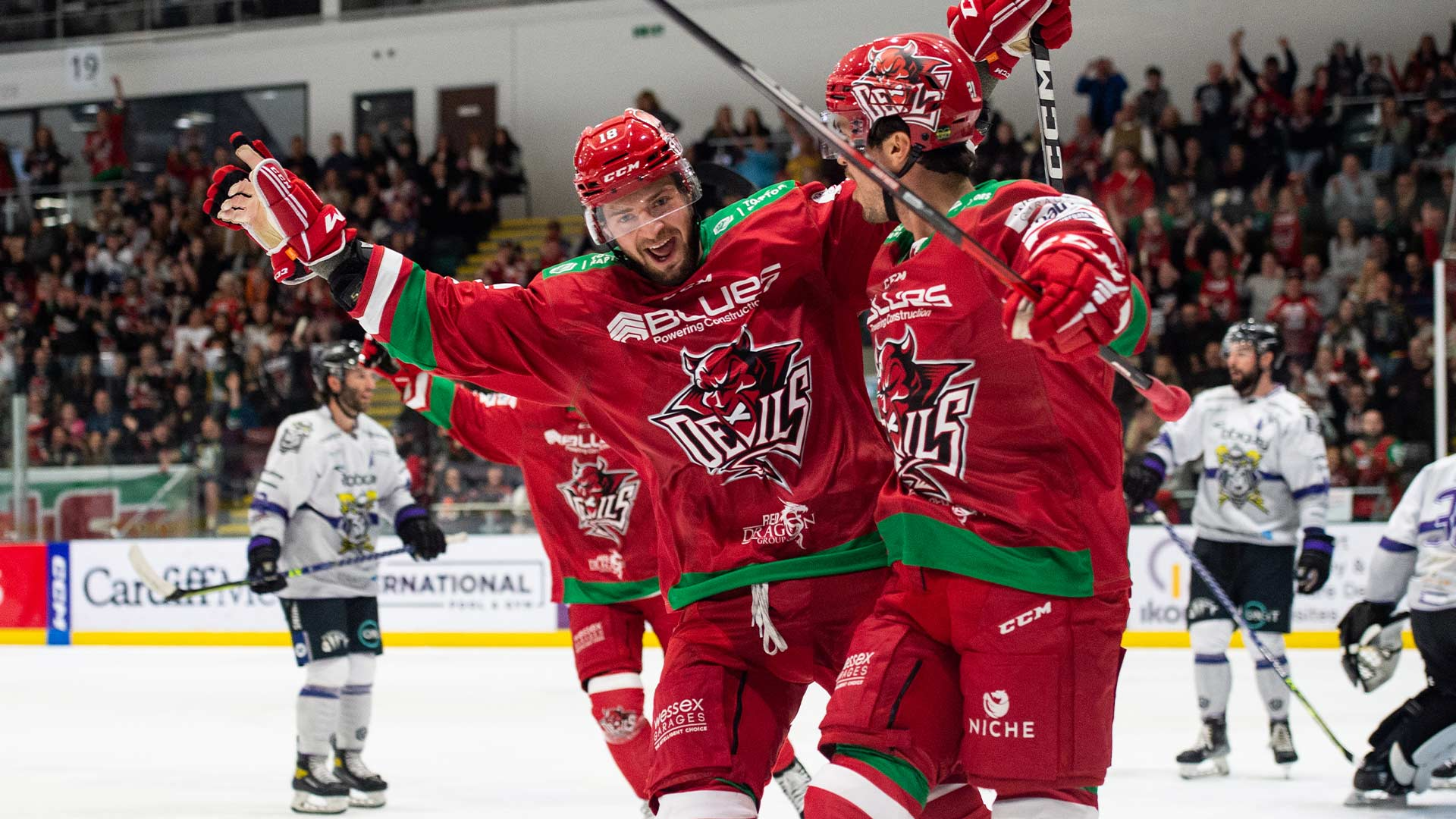 Head coach Brodie Dupont says a strong team ethos was the key factor as the Cardiff Devils claimed maximum points from the opening weekend of the Elite League season.

In an ominous early warning to the rest of the EIHL, the Devils coach believes his new-look team not only have the skill level to compete, but also possess the character and willingness to back each other to succeed.

The Devils turned on the style in front of their own fans and visiting Calgary-based owners for Sunday’s home opener against the Manchester Storm.

“The biggest thing I love about my team is that they want guys to succeed, they want each other to succeed,” said Dupont.

“The selflessness and willingness to sacrifice themselves for each other – that’s the biggest thing I love about our team. We try to recruit for that purpose, and right now, we love the character in the room.

“We feel like we can build the character and build around that. We also feel we have a lot of skill around that character, which is a huge bonus.”

The result comes 24 -hours after the Devils claimed a hard-fought road win against Sheffield, and Dupont was impressed by how his team avoided any complacency to build on that momentum back at Ice Arena Wales.

“Sometimes you might get teams, who have a habit of being comfortable in their own home and then tend to let off and hope that the crowd itself will be enough to drive them.

“We took ownership and we really focused on the things we’ve been building towards.

“We’re excited and all really happy but it’s just one more game and that’s going to be our thought process all year,” he added.

“It’s all going to be about the next practice and we’ll build this week again for another big weekend.”

Sanford’s line-mate and assistant captain Trevor Cox is the team’s early point-leader following an impressive night against Storm, posting five assists to add to his solitary assist against Sheffield.

“Some weekends it can be hard on the second game of the weekend, physically and riding the bus last night but the guys showed up, were ready to work and put in a really good performance and that showed on the scoreboard,” reflected Cox post-game.

“I just play in the same way that got me the trust in the locker room from the coaches to give me that ‘A’ and try and work hard every night and set an example for the rest of the guys.”

Riley Brandt (Cox, Ben Davies) and a power play marker from Marcus Crawford (Cox, Reid) had given the Devils a healthy lead by the midway point of the game.

Sanford then put Manchester to the sword, scoring three-successive goals within little over four-minutes as the Devils sailed into a 6-0 lead.

But Brandt notched his second of the night as Cox claimed his fifth point before Justin Crandall (Penny, Josh Waller) made it eight for the Devils with the night’s second power play goal.

Bowns recorded the win with 26-saves as he completed his second game in as many nights.

The 31-year-old is expected to face stiff competition from Taran Kozun this season, but Bowns has made a strong start since rejoining the Devils this summer, stopping 55 of 57 shots he faced this weekend.

“He had a little less work tonight in terms of the quality of chances against, but he still made the stops he needed to and there’s not much he could do really on that goal,” said Dupont on Bowns before adding it was Bowns’ display in Sheffield that convinced him to stick with the Team GB goaltender.

“We have two really good goaltenders, so that’s a benefit,” said Dupont. “They’ve been battling in practice.

“The plan was always to start Bowns on opening night and then it was going to be on a game-by-game basis.

“You saw the way he played in Sheffield, so we felt we needed to go back to him.

“The goaltenders have a good relationship, we’re constantly in communication and we made a call to let him go back-to-back and obviously, he played very well in both games,” he added.

“It would’ve been nice for him to get the shutout but he’s more happy about the win than the shutout”.

INJURY UPDATE
Joey Martin and Mark Louis were both absent from last night’s game despite both being initially listed on the original official game sheet.

Both players iced in Sheffield but Martin was absent from the warm-up prior to the Manchester game before his name was removed from the official game sheet. Louis, however, did partake in the warmup but was also withdrawn from the line-up pre-game.

Speaking post-game, Dupont confirmed that a late decision was made on both players and both will be reevaluated ahead of next weekend’s Challenge Cup games against Guildford Flames and Coventry Blaze.

Speaking on Martin’s absence, Dupont explained: “It’s one of those things where you think, ‘do you risk it at this stage of the season?’. You’ve got to think of the bigger picture sometimes.

“He had a little bit of a bump, so it’s something that could’ve been aggravated so we just felt, we rest him tonight, the thought is he’ll be in this coming weekend.”

On Louis, he said: “ He was also a gametime decision. We’re going to get him evaluated again, he got knocked a bit in Sheffield, and then we’ll see where they are next week.”

NEXT UP
The Devils turn their attentions to the Challenge Cup next weekend with Guildford Flames visiting the IAW on Saturday (7pm) before they make the trip to Coventry Blaze on Sunday (5:30pm). Tickets for forthcoming home games are available via the team’s official site.