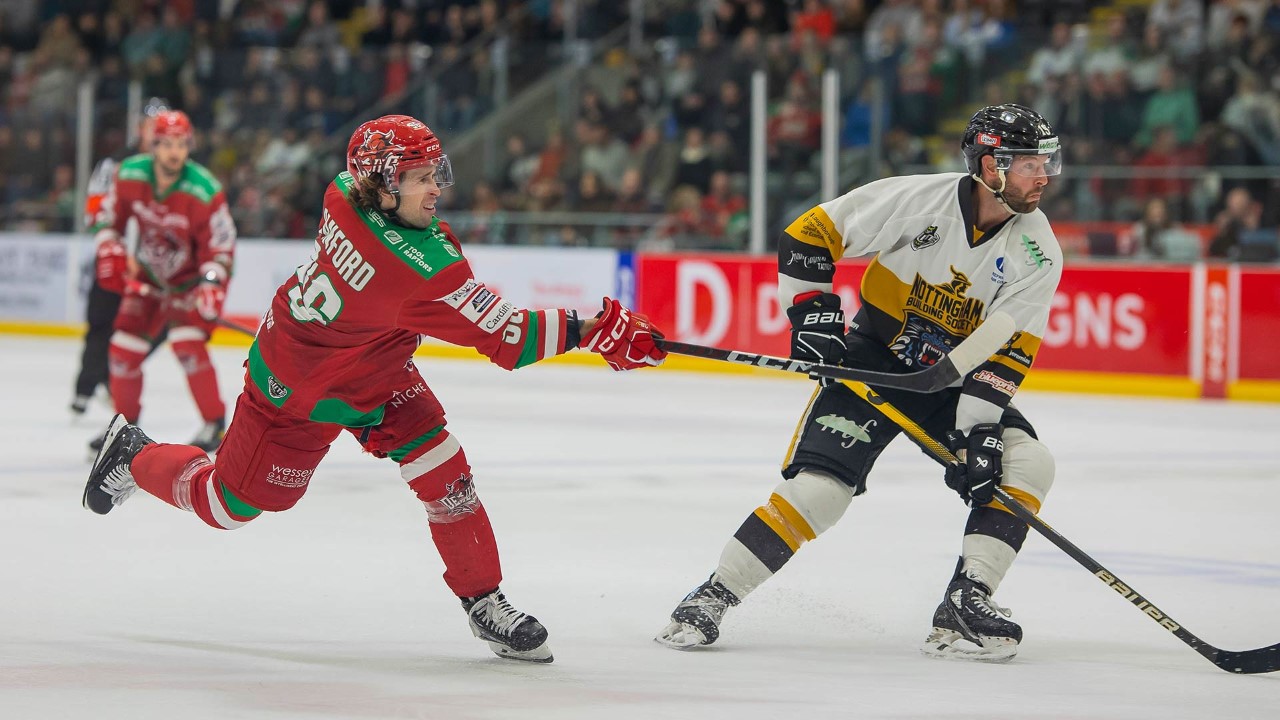 Sanford netted four goals against Guildford Flames last Sunday to help the Devils return to winning ways as they head into a demanding schedule of three games in three successive nights.

Belfast defeated the Devils in the Challenge Cup final and won the Elite League last season, before Dupont’s team took revenge by defeating the Giants in the Play-Off final.

The two rivals clash for the first time this season with both sides looking to climb the table.

Ben Bowns will return in net to face Belfast (3-1-0) despite Taran Kozun starting in the win over the Flames.

Against Guildford, Sanford’s goal haul saw him extend his tally to nine goals for the season, in both league and cup, and become the Devil’s top-scorer.

Dupont’s clear message to the Canadian shooter is to keep firing: “Any time a player scores four, that only helps with their confidence.

“The big thing for him now, is we want him to keep shooting, use that hockey stick and have that mentality that you’re going to score some more goals for us.”

Sanford enjoyed success last season playing on a line with long-term teammate Trevor Cox and Jake Coughler and has continued to deliver despite Dupont choosing to reshuffle the Devils line-up in recent weeks.

“He [Sanford] showed in the play-offs last year that he’s a big game player. He and Cox had eight points in four games so that line was buzzing. Coughler was part of that line, but I think he’s helping to drive the line with Brodie Reid and Justin Crandall with a different element,” explained Dupont.

Here’s where they are ⤵️ pic.twitter.com/CdxfOTC6MN

Sanford and Cox are now playing on the Devils first-line with centre Joey Martin.

“We really like that line right now,” added Dupont. “We feel like they’re going to be a big factor in every single game, we expect them to be difference makers, but the reality is, we built our team with a lot of depth.

“It could be that Ryan Penny’s line takes over on Friday or Ben Davies’ line has a good night, as they did in that first game against Sheffield – the reality is, we’re in a very fortunate position to have the depth we have.”

Immediately after tonight’s game, the Devils travel to Scotland to face Glasgow Clan on Saturday before completing the weekend against Fife Flyers on Sunday.

The Devils then have two days without a game before facing Guildford Flames again on the Wednesday evening as part of a mammoth stretch of games that sees the team take in nine games in 16 nights.

“Anytime you face the defending champions it’s going to be a measuring stick,” said Dupont.

“Belfast will have a bit of a target on their back where teams want to measure up well against them. We feel like we’re going to be in contention this year along with five or six teams and that’s not to discount other teams.

“There are certain clubs that usually contend, but I feel like there are some mixed candies in the bag this year that are going to be competitive this year.

“With the Belfast game in particular, there’s always a lot of hype, two big clubs going at it and from the fans perspective, they know they’re going to get a good hockey game, so we’re really excited to play Belfast but every game is so important.”

The Devils are hopeful that Sam Jardine will return following a flare up of a previous injury that ruled him out against Guildford but will make a game-time decision on the defenceman, who has not trained this week.

Forward Josh Brittain (lower body) also missed out against the Flames but will not feature and will be out this weekend. Brittain is expected to undergo further evaluation before being given a realistic time frame to return.