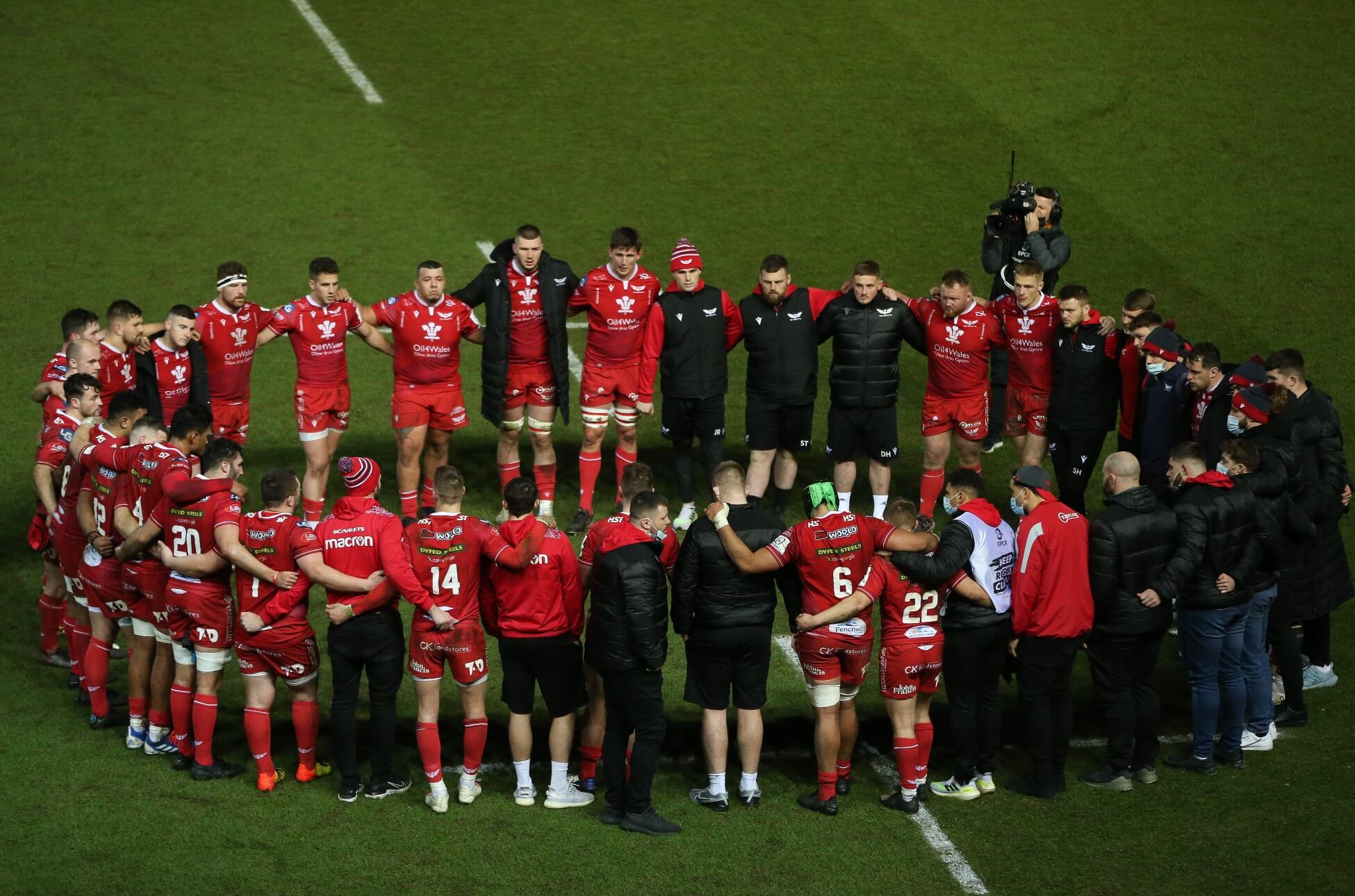 Scarlets players in a team talk during game against Bristol Bears. Pic : Scarlets.

Scarlets head coach Dwayne Peel is looking to move on from European competition after his side crashed out of the Champions Cup on Saturday.

Despite a competitive first half, the Scarlets failed to keep up with Bristol’s aggressive play. A ruthless closing 20 minutes from the visitors secured them an impressive 52-21 victory.

“I’m disappointed because at 60 minutes we were right in it” says Peel.

“I felt like we gave away points throughout the night too easy.”

“The lesson for us is that we can’t afford to give points away after we’ve worked hard for our points.”

The Welsh region stayed strong for the first hour, fending off a number of attacks before charging into the Bristol half on the counter.

But after the hour mark hit, the Scarlets appeared to have nothing left in the tank, which allowed the opposition to glide past and seal a convincing win.

Which try was the pick of the bunch? pic.twitter.com/CphJMzSbUY

“31 points in the last 20 minutes is pretty tough reading for us” claimed Peel.

“We were aggressive in defence at times and got the ball back and managed to pressure still, but we couldn’t sustain it.”

The result means that Scarlets are eliminated from the Champions Cup and finish rock bottom of their group.

After a campaign that has been full of disappointment on and off the pitch, Peel says that his side are now  focussed on the United Rugby Championship.

“We move on and now and concentrate on the URC.”

Here’s Dwayne’s reaction to our defeat to Bristol Bears

“We’ve got a tough task next week in Belfast, so we’ve just got to get back on the horse and put things right.”

“We have got a hungry young group. They’ll get the chance over the next while which is what we need. We need to get our younger boys in competition and pushing through.”

The match left both sides with some frustrations at the final whistle.

Though Bristol come out the happier of the two, coach Pat Lam is asking for his players to be more cut-throat.

“The last 20 minutes is probably a better one for me as a coach because we scored some good tries” explained Lam.

“I think we showed 20 minutes of being ruthless.”

“We can be serious contenders if we are more ruthless.”

The Bears coach had a lot of praise for his Welsh players after the match, especially Dan Thomas, who made his 100th appearance for the club.

“It’s a great example for not only young Welsh rugby players but for rugby players and people in general” said Lam when talking about Thomas’ story.

“For him to come back and play 100 games for Bristol Bears is phenomenal. I’m proud of him.”

Huge honour for me and my family to reach a 100 appearances for this great club thank you to everyone for the messages and look forward to the next ❤️ @ Stradey Park https://t.co/sN35zrHohF

“He’s a stubborn mule. He’s still got to improve his game, but that’s tenacity and perseverance at his best.”

Whilst Bristol have a break next week, the Scarlets will be in action next Friday as they take the trip to Ulster.

The Welsh side will be hoping to bounce back from their European losses and continue their good run of form in the league.

Scarlets are currently ninth in the United Rugby Championship with two wins in their last two games.