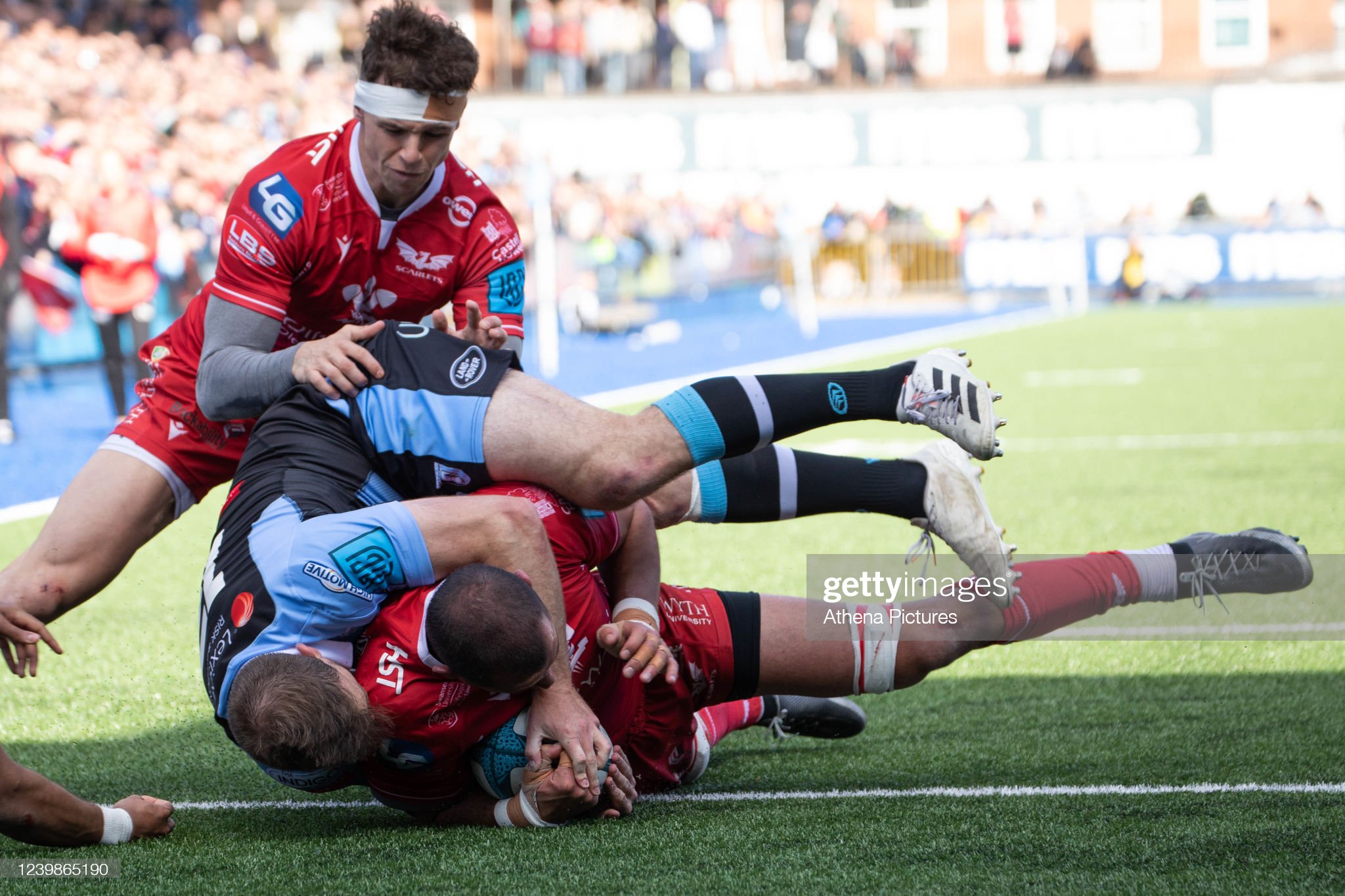 Aaron Shingler of the Scarlets scores a try against Cardiff. Pic: Getty Images.

Dwayne Peel believes the Scarlets can make the United Rugby Championship play-offs after they thrashed Cardiff at the Arms Park.

The Scarlets head coach watched his team hammer their rivals 49-15 to move into ninth place in the table on the back of three successive bonus point victories.

The top eight qualify for the end of season play-offs and the resurgent Scarlets – the form team in Wales – look well placed after their return to form.

“It has always been a goal,” said Peel when asked about his region’s chances of making the knockout stages of the competition.

“We knew we haven’t had any consistency in our season, it has been all over the place.

“Personally, I wanted a run of games to see where we are at. In all honesty, we are eight months into a project, we need to get better, we need more consistency in what we are doing.

“I am passionate about where I want the club to go and the play-offs is the challenge for us, but it is about performing each week and the boys driving that.

“The level of togetherness we had today was good, we played for each other which is important when you are playing for a club like the Scarlets. We want to grow real competition and depth.”

🎶 SOSBAN FACH IN THE ARMS PARK

For Cardiff, this was their second heavy defeat to their west Wales rivals inside seven days and they conceded 49 unanswered points, 42 conceded in an embarrassingly one-sided second half.

The result means Dai Young’s side have now lost five of their last six games and 10 out of their last 12. They lay 14th out of 16 in the URC table and are fortunate the structure does not involve relegation.

Next up for them is a trip to play Saracens in the last 16 of the European Challenge Cup on Friday night.

It’s a game they look ill-equipped for after conceding 152 points in their last four games but director of rugby Dai Young insisted he was “more happy” than he was after the first Scarlets defeat.

“It sounds a ridiculous thing to say, but I was more happy today then I was last week,” said Young.

“Last week they (Scarlets) were first to everything and we lacked energy, desire and determination.

“There were a lot of doubters, questioning how many of the players wanted to play for the jersey.

Big question should be asked about Dai Young after this performance, Cardiff had 12 Welsh international playing and 2 from other international, and they give a performance like that, you can’t blame the players all the time, the coaches need to take responsibility

“I don’t think that could be chucked at us tonight, we gave as good as we could have got, but we were not good enough.

“The effort, energy and commitment was there, but everything went wrong in the second half.

“They were too physical for us up front, certainly in the second half and we could not match them.

“Our set-piece was creaking, we gave away penalties which gave them field position and momentum. Once a team resorts to keeping it tighter, we struggle.

“In the second half we had 30% possession and 25% territory so you are always going to struggle.

“Anything that did go wrong, went wrong with the two yellow cards and the amount of injuries as we finished off the last 15 minutes with a centre at flanker.

“The last two tries were us just throwing caution to the wind.

“The game had gone and the messages we were sending on we were trying to score four tries for the bonus point.”