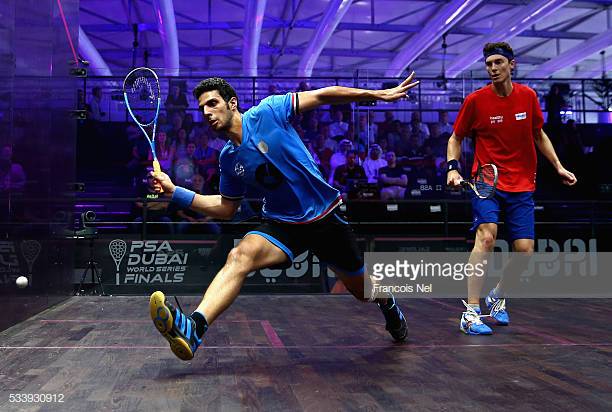 Omar Mosaad of Egypt is in the Welsh Wizards team. (Photo by Francois Nel/Getty Images)

The Hammer of Thor is in Cardiff and looking to smash holes in the front wall of a squash court at the Sport Wales National Centre.

Cairo-born Omar Mosaad, the hard-hitting Egyptian who has earned the nickname Hammer of Thor, a term from an American fantasy novel, on the professional circuit.

He will head up the Welsh Wizards team in their Premier Squash League match against champions St George’s this evening (Tuesday).

Wizards have Mosaad at number one with a powerful Welsh back-up – Peter Creed, Emyr Evans, Elliott Morris-devred and Tesni Evans.

Mosaad, who lives in Prague, will be greeted by a sell-out attendance in Cardiff.

He is among eight Egyptian players in the World’s top 20 players, including the top four Mohamed Elshorbagy, Ali Farag, Marwan ElShorbagy and Tarek Momen.

Number one Mohamed plays for St George’s, who are visitors to Cardiff this evening, and Marwan is Welsh Wizards’ leading player. Neither, though, are available this evening.

There are also six Egyptian players among the women’s leading 20 with Nour El Sherbini, Raneem El Welily and Nour El Tayeb at one, two and three.

With that level of quality Egypt would be a major force at the Olympics if squash was included at the games, but campaigns to make that possible have not found success so far.

“Egypt have many squash champions and if it were an Olympic sport, we would have the chance of winning many medals,” said Mosaad.

“I believe squash could enter the Olympics if it received more attention on television. People previously did not know about tennis, but began to learn about it through television and their curiosity increased.”

Mosaad started playing squash at the age of seven, having abandoned earlier plans to become a swimmer on the international stage.

“In order to be selected, I had to pass five stages,” he said. “I only managed to pass four and failed three times to pass the fifth.

“I was young, and gave up to try something different.

“The Al-Ahram Squash Open was being played and famous Egyptian squash players were competing, including Ahmed Barada and Amr Shabana.

“I started playing at Maadi Sporting Club. At the age of 17, I moved to Wadi Degla Club, where I stayed for five years, before going on to Heliopolis Sporting Club.”

Current World ranking of each player in brackets

Second Half fixtures reversed, dates to be confirmed.