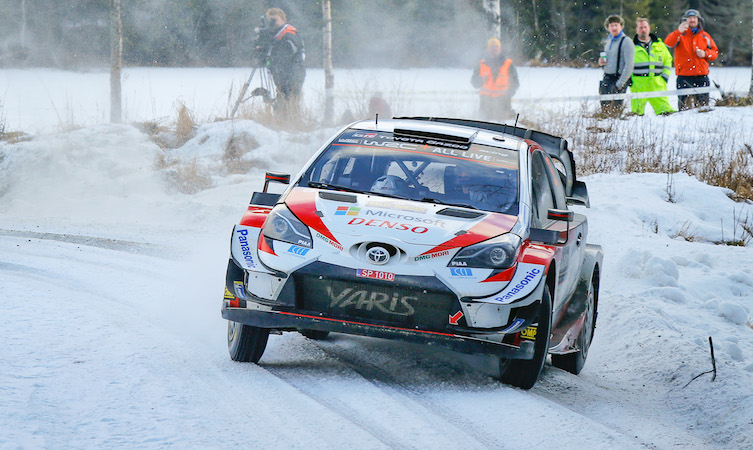 Elfyn Evans admitted he was hoping for better after finishing fifth on the Arctic Rally Finland.

The Welsh rally ace, who won last season’s snow round in Sweden, was never in the hunt for victory as he finished one minute 1.5 secs behind winner Ott Tanak of Estonia.

Evans slipped from second to fourth in the championship standings after two rounds – on the same points as defending champ and Toyota Gazoo Racing team-mate Sebastien Ogier.

“I had a good start to the final day,” said the 32-year-old from Dolgellau.  “The grip was higher than I expected but after the first few corners we seemed to find a better rhythm and it was a good time.

“But then it was not the best run for us in the Power Stage. It felt OK but the time was quite a bit off where we would have liked to be.

“It has not been the best event for us to be honest, I’m quite disappointed with the overall result. There were some flashes of good speed but nowhere near consistent enough to challenge for the top positions.”

Evans looked in with a chance of snatching fourth on the event after winning the opening special stage of the day – his second of the rally.

But Ireland’s Craig Breen responded on the final stage – which was also the Wolf Power stage – to confirm fourth, nine secs ahead of Evans.

Kalle Rovanpera bagged his best result of his career to take second – 17.5 secs behind Tanak – to take second ahead of Belgium’s Thierry Neuville by just 2.3 secs

And that was enough to give Finnish ace Rovanpera the lead in the standings as he leapfrogged his Toyota team-mates.

Ogier recovered fro burying his yaris WRC in a snowbank on Saturday – losing 20 minutes – to finish fifth on the Power Stage picking up an extra point to keep him just ahead of Evans in the standings.

Rovanpera is on 39 points four ahead of Neuville with Ogier and Evans on 31. Tanak, who retired from the season opener in Monte Carlo, is fifth with 27 points.

The next round is the Croatia Rally from 22-25 April.