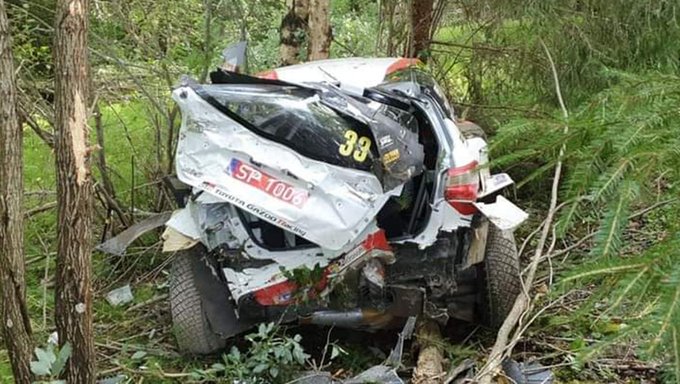 Elfyn Evans has walked away from an enormous accident on the South Estonia Rally, which destroyed his Toyota Yaris WRC rally car.

On what was a dress rehearsal for next month’s Rally Estonia – which signals the re-start of the FIA World Rally Championship – Evans was lying fourth on the fast gravel event when he cut a corner too severely and clipped a tree stump on a very high-speed sixth gear corner.

The car was thrown wide into a field, before rolling several times and coming to a halt amongst a cluster of trees.

Despite the severity of the accident, he and co-driver Scott Martin thankfully emerged unscathed.

Having won Rally Sweden in February, Evans is currently second in the WRC drivers’ standings – eight points behind team-mate Sébastien Ogier and 12 points ahead of Thierry Neuville (Hyundai).

The 30-year old from Dolgellau has been waiting to resume his challenge for the world title ever since Rally Mexico in mid-March, which was the last event to run before the Covid-19 enforced lockdown.

Many WRC crews were using the weekend’s South Estonia Rally as a shakedown test, prior to the series resuming in the same country on 4-6 September.

Unfortunately our rally was cut short today with an accident (we are both ok) but we have most of the info we need and are looking forward to Rally Estonia. Thanks to @TGR_WRC for the chance to do this rally. 🇪🇪 #EE33 pic.twitter.com/x0m2hgxXXZ

“Unfortunately we turned in a little bit early in a very high-speed place and cut the corner slightly too much,” explained Evans.

“There was something hidden in the grass and that catapulted us off into the trees.

“It was quite a big accident, which is obviously not ideal, but at least we’re both okay.

“It was still really good to come here and to experiment a little bit with the car.

“It was a shame it was cut short of course, but I think we have all the information we need now and we can look forward to Rally Estonia and give it our best shot.”