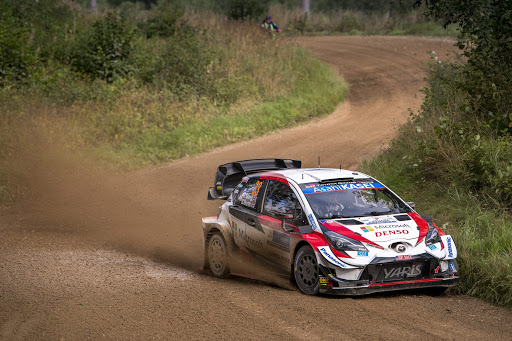 Elfyn Evans is in fifth place at Rally Estonia.

The Toyota driver is fifth after the first full day’s action on the super-fast Rally Estonia, just over a minute off the lead.

Overshooting two junctions on one stage was costly, but at least he is only 16 seconds behind Sébastien Ogier – his team-mate and the only driver lying ahead of him in the WRC points table.

“It’s not been the day we wanted,” admitted Evans.

“This morning I made a couple of clumsy mistakes in the second stage and gave away quite a lot of time, and in this rally you can’t really afford to do that.

“Apart of that, it’s been going okay, but I haven’t been fully at one with everything.

Things haven’t just fully clicked today, we could have had a better day. We’ve been pushing hard, some of the times have been ok but I’m just not fully satisfied inside the car. Let’s see what tomorrow brings, we have new stages which will be another challenge #EE100 @TGR_WRC pic.twitter.com/zaC6DaJ7Rl

“The car has the pace to do it but it’s just not quite clicking for me at the moment.

“We’ll make some minor changes tonight to try and find some more confidence, and I’m looking forward to a new challenge tomorrow.”