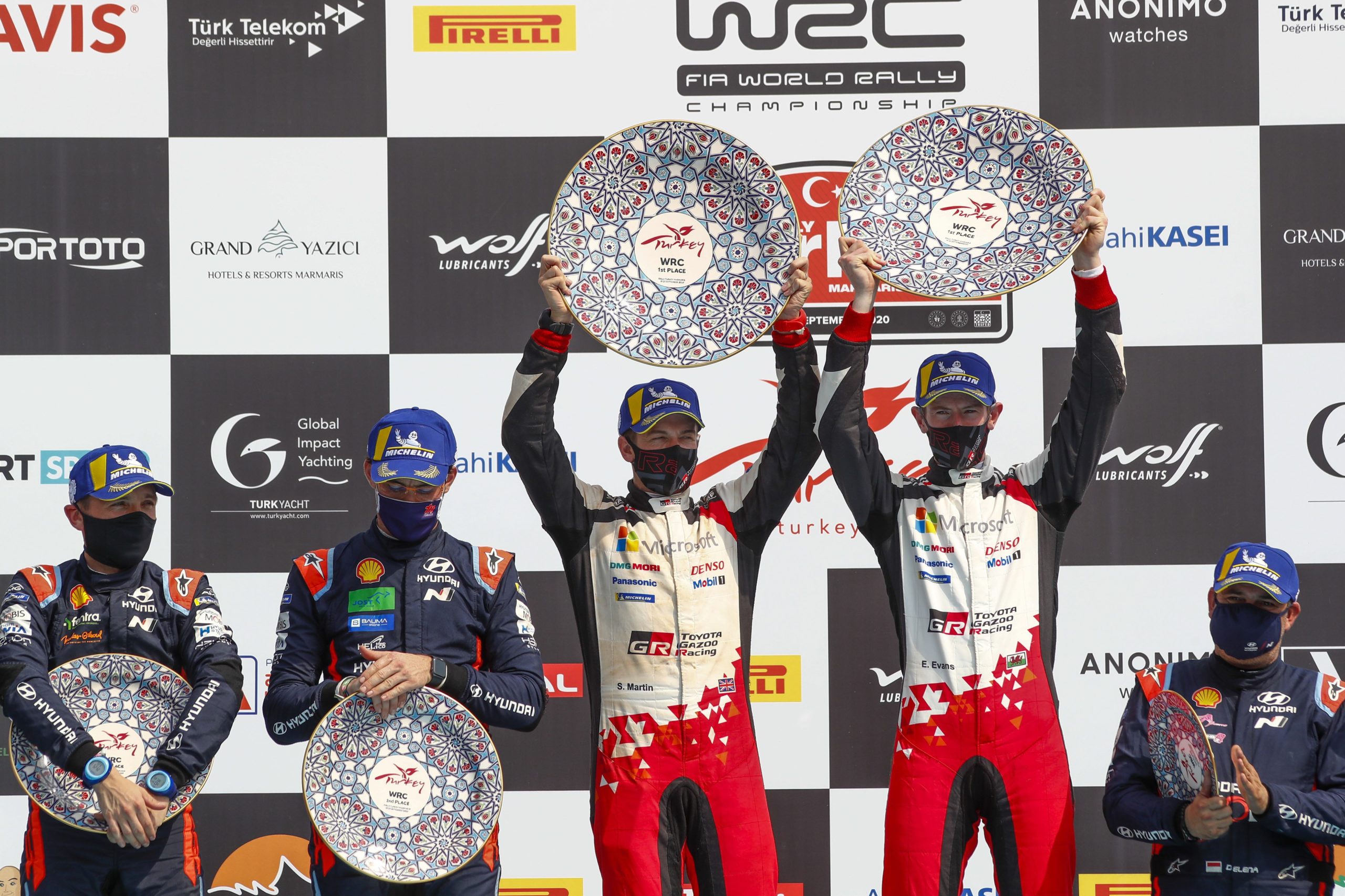 Elfyn Evans stormed to a stunning victory on Rally Turkey to seize the lead in the World Rally Championship title chase.

The Dolgellau racer overturned a one minute deficit to win by over 35 secs on an astonishing final day.

Evans ‘win was his second of the season – after Sweden – and third of his career.

“It’s been a tough weekend. We were there or there abouts most of the weekend, and we thought that yesterday afternoon was game over with a chance for victory,” said Evans, who triuphed with co-driver Scott Martin.

“We really tried to drive well and stay in the middle of the road.

“I’m well aware that there is a bit of luck that needs to go your way and I never like to inherit positions from others in that way. This is the nature of Rally Turkey especially, and we knew this coming into the weekend.

It’s their second win of the season in the #YarisWRC and moves them to the top of the #WRC standings! 🔝#Toyota #ToyotaGAZOORacing pic.twitter.com/C1Ytm1GDLp

“Still very happy – it’s not the sweetest victory when you know that you’ve perhaps been a bit more conservative, but that’s the aim of the game.”

Evans now leads the standings by 18 points from Toyota team-mate Sebastien Ogier – who retired on the penultimate stage – with two rounds left in Sardinia (8-11 October) and Belgium (19-21 November).

Evans had gone into the final day in fourth place overall just over a minute behind Belgium’s Thierry Neuville.

But as all those above him had tyre problems on the opening, rock-strewn Cetibeli speed test Evans dramatically took the overall lead by 46 secs in an astonishing turnaround.

And it for worse for Ogier – who had moved into second overall – on the penultimate stage as he retired with an engine problem handing over the title lead to Evans.

Six-time champ Ogier has led Evans by nine points going into the rally.

“It’s a shame for Seb. It was rough in there and I tried to find the balance as best I could,” said Evans after completing his second run through Cetibeli with a 36secs advantage going into the power stage.

Neuville won the power stage to take the maximum five points on offer but could do nothing to stop an Evans victory.

The Hyundai driver said: “I really have the feeling that we deserved more, but to be back on the podium is great. I have to be thankful for the team – the car was working really nice.

“I hoped for more, but obviously we were unlucky this morning. That’s how it is.”