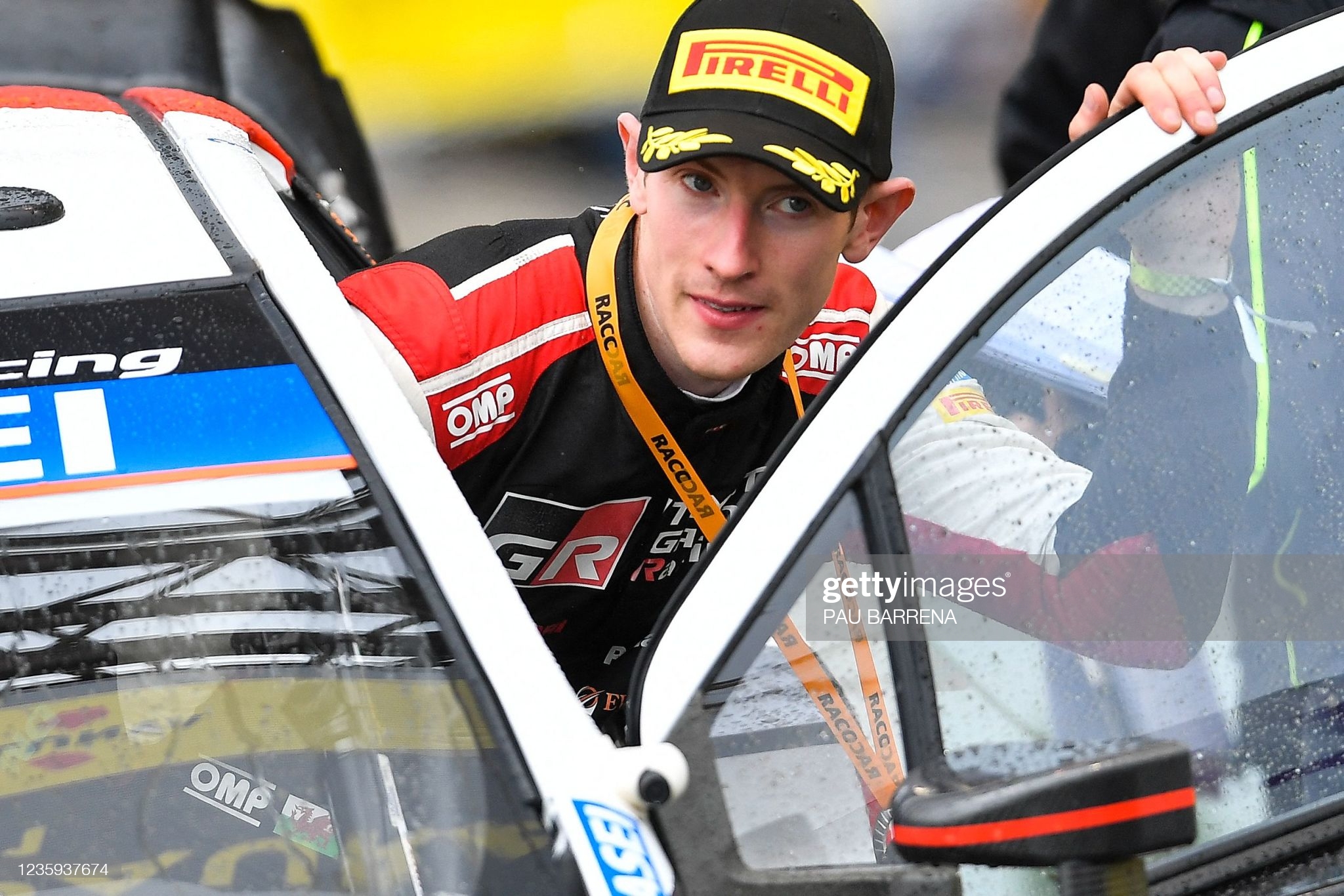 It ain’t over till the fat lady delivers her final aria in northern Italy, according to Elfyn Evans and his pursuit of a first World Rally Championshp. The odds may be stacked against him becoming the first Welsh world champion, but it won’t be for lack of ambition this weekend, as he tells Paul Evans.

By his own admission, becoming world rally champion this year is a bit of a long shot – but that’s not going to stop Elfyn Evans trying as he heads to the final round of the series in Italy this week.

Evans had a better chance of securing his first title last year, when he arrived at Rally Monza with a 14-point advantage at the top of the leaderboard.

And the dream would have come true, had it not been for one icy tightening right-hand corner in the foothills of the Italian Alps that sent his Toyota Yaris skating off the narrow road and down a bank.

The Dolgellau ace was lying third at the time. Had he finished in that position, and scored a couple of Power Stages bonus points, Evans would have been world champion.

He has an outside chance of winning the title this year – coverage of which is in S4C on Sunday – although his task is significantly more difficult.

Evans is second in the standings – a full 17 points behind defending world champion and Toyota team-mate Sébastien Ogier.

Add to that, this year’s Rally Monza is a full month earlier, meaning that there is less likelihood of snow.

Thirdly, there is very little opportunity to make up time on stages laid out inside the Autodromo Nazionale di Monza, where the majority of the action will take place.

“Of course it’s possible, but I’m not going there realistically thinking that I have a chance,” admits Evans on his world title hopes.

“I’m going there more thinking that I need to achieve my maximum to cover off any eventualities, let’s say.

“That’s the bottom line. I’m going there to do the best job that I can and obviously winning the rally would realistically be the only way of having any hope of being champion, so that’s what I’m trying to focus on.”

Evans must score a top three finish to have any chance of becoming world champion, while Ogier can finish as low as sixth (if he wins the bonus points scoring Power Stages) to secure his eighth title.

Rally Monza might contain the WRC’s least challenging format, with two days of competition within a motor racing circuit – but as Evans found to his cost last year, anything can happen.

“The stages in the mountains are really nice,” says Evans.

“There was hope at one point to get two full days in the mountains and that would have been really good, but for one reason or another it wasn’t possible so we’re back to a very similar format to what we had last year.

“There is one extra mountain stage that we’ll do and obviously with the fact that the rally will run a bit earlier in the year there’s a chance perhaps that the weather should be a bit less extreme. Of course, last year the whole thing went wrong because of this extreme weather in a way, but you know it’s part of the game.

“There’s no pointing a finger. Last year I made a mistake and that was that. It is what it is, really.”

Despite an incredibly successful season in which he’s won Rally Portugal and the famous Rally Finland, can Evans identify places where crucial points slipped through his fingers this year?

“I think the obvious one was Croatia where we had that mistake on the last corner, but it swung something like ten points in the championship. That was quite a key moment.

“There were rallies like Sardinia where we should have achieved more. Seb won there from first on the road which shouldn’t have been possible.

“Okay, we were only second on the road, but still I feel it was ours to beat him but he simply did a better job.

“Of course there are always ifs or buts in the sport.

“Ultimately it is a long season and it’s the driver that can consistently win that’s the one who’s in the strongest position.

“I’m not sure if regret is the right word but there are areas where we could have done better throughout the year.”

In a sport with such high-speed fine margins, not gelling with his Toyota Yaris doesn’t mean easing off the throttle.

Evans has been pushing as hard as possible, but sometimes the stage times just weren’t there. Sometimes, trying too hard produces slower stage times.

“It’s not the case that I don’t feel comfortable and therefore I’m pushing less, it’s actually the opposite in that you’re trying your maximum but because you’re not hitting your lines and you’re running wide the times just aren’t coming.

“Whereas a rally like Finland you hit every apex and everything just happens naturally because you have such a connection with the car and you have to in some ways try less hard.

“Finland was a pretty nice weekend for us to be honest.

“We didn’t start off actually with a perfect feeling, but we’d done quite a big change ahead of the rally in the test because we struggled in Estonia and knew that I had to change something. Otherwise, I would basically end up in the same place.

“When I did those changes, I immediately felt more comfortable at the start of the rally. But then I still needed to refine a few bits, but, thankfully we managed to take a couple of steps in the right direction.

We then started Saturday with a very good car and good road position, as well, and it all just sort of happened quite naturally from there. really.”

Evans values the support of the travelling fans and never fails to see Welsh flags on the side of the road.

However, he does miss his home round of the series – as Rally GB has not run since 2019 and is not on this year’s WRC calendar.

“Now that the Covid-19 restrictions are easing there have been a few more Welsh flags popping up,” he says.

“Wales Rally GB was always a massive boost and recognition of the support that we have at home. It’s a great shame that we don’t have that event anymore.

“It’s a little bit frustrating on a personal level because in 2018 I think we were lying second and I had a bit of an issue with the car.

“In 2019 I’d came back from a back injury, had good pace but made a mistake on the first day and lost 50 seconds or something and that was then not enough to challenge for a win.

“Since my Rally GB win in 2017, I’ve always felt like I’ve had the speed to challenge for another win but never pulled it off.

“I was actually really hoping to have the chance in the Toyota Yaris because it was always a car that was strong in Wales.

“But, obviously, we won’t get that chance now, which is a shame because Rally GB is always special.

“And of course, a lot of the other drivers have gained a home round, like Thierry Neuville in Belgium and Ott Tänak with Estonia.

“It’s a shame to lose that home round advantage, even though it’s not like the advantage that it used to be years ago, because I think the field is much closer now.

“But your home rally does give you a lift and we’ve missed that now for the past couple of years.”

With Ogier not contesting a full WRC season next year, Evans would normally start as firm favourite for the 2022 world title.

However, there is a major change to the regulations and brand-new hybrid cars for next year meaning that Evans won’t know how competitive his Toyota is until he can compare it against the opposition on the opening round of the 2022 season in Monte Carlo.

“We have new regulations coming for 2022 and that means an all-new car.

“We’ve been introduced by the team to that programme quite late on. They’ve done a lot of the initial development work with Juho Hänninen, who is the test driver for the team.

“But over the last couple of months we’ve been driving a bit with the new car, doing the odd test here or there.

“Which is always a difficult balance both for the team and us as drivers because the regulations are quite different. So, it’s hard to have a foot in each car with the interest of obviously preparing as well as you can for next year and still maximising what we have left to do for this year.

“It’s exciting to have these new regulations coming but it does mean that after Monza there are a couple of tests still between then and the end of the year and there’s always some end of year commitments.

“We finish the season quite late on; it’s mid- to late-November when we get to finish and of course when you take the Christmas break out and put the tests in then it means that we have very little down time.

“When January hits then you’re full into preparation for Monte Carlo because that happens soon.

“It really is quite a short turn around and with the new regulations then there is even more of an emphasis on preparation for 2022 this year.”

At least Evans knows that he has the experience and skill to challenge for victory on every round of the WRC.

“It’s always been the aim to do as well as you can. Unfortunately, in the past for one reason or another we’ve never managed to be consistently in front enough to challenge for the championship.

“That’s nice to have, but I feel there’s some improvements to do still to be the full picture. I’m sure every other driver is saying that.

“You know there are always things that someone can do better, but the target is always to try and do as well as possible and fight for as many rally wins.

“Hopefully, that leads to some championship success. But my target heading into every event is that event only – and I worry about the championship later on.”

All the excitement from Italy in the company of Emyr Penlan with commentary by Howard Davies and Rhys ap William.