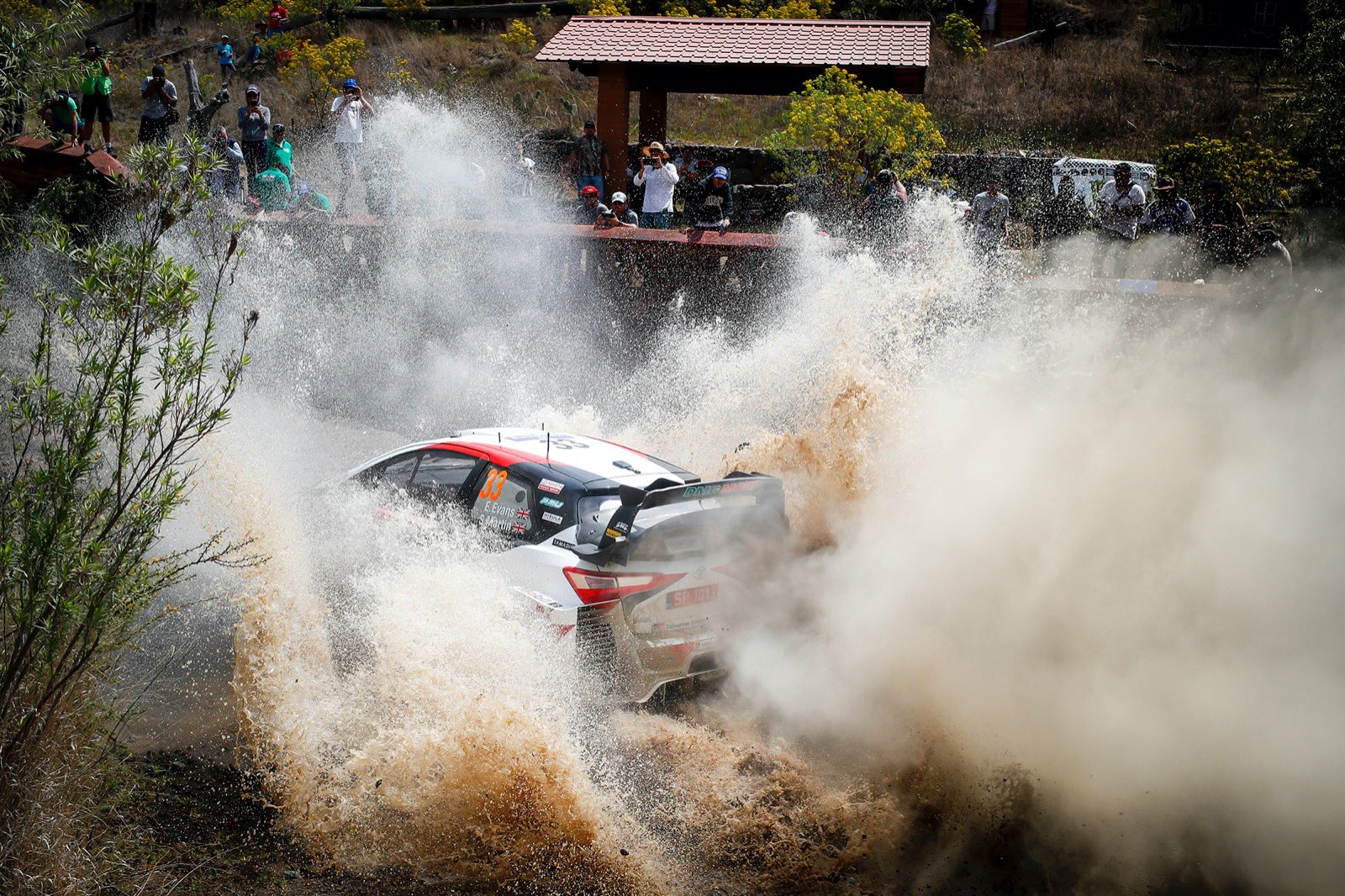 Give us a wave: Elfyn Evans will be aiming for victory on this weekend’s Rally Mexico.

This is the first time that Elfyn Evans will start a round of the FIA World Rally Championship leading the drivers’ standings, and with it comes the handicap of having to run first on the road, at least to start with. It will certainly be a disadvantage at this weekend’s Rally Mexico, as he’ll sweep the loose gravel clear and leave the road cleaner for his rivals running behind – although the Dolgellau ace vows to just ‘focus on the job in hand’ as he aims to continue his great start to the season.

Evans has a pretty good record in Mexico, with a couple of fourth place finishes and a career best third last year. And this year has started well too, with fastest time on today’s Shakedown stage.

However, the event can throw a curve ball too, as he found out in 2018 when he suffered a nasty sixth gear roll.

Having moved to the Toyota Gazoo Racing World Rally Team for the 2020 season, Evans has led both rounds of the WRC this year – finishing third in Monte Carlo and becoming the first British driver to win Rally Sweden.

Having quickly bedded into his new Yaris WRC on two of the most specialised events in the series, Rally Mexico might be the WRC’s first gravel rally but it too contains its unique characteristics. The biggest one is that it’s the highest round of the series, rising 2,727 metres above sea level where engines, deprived of oxygen, can lose as much as 20% of their power. It’s physically tough on the driver too, with the teeth-rattling gravel stages taking place in 30°C temperatures.

Driving the best of his career, Evans arrives in Mexico high on confidence and knowing that, as with all rounds of the series, it’s a rally he is more than capable of winning. It will be a tough challenge of course, not least as his rivals include Thierry Neuville (Hyundai), with whom he shares the lead of the series, Toyota team-mate Sébastien Ogier, winner of five of the last seven Mexico rallies, and reigning world champion Ott Tänak (Hyundai) who is sure to be back up to full speed after his monster accident in Monte Carlo. And you can’t discount Esapekka Lappi, Teemu Suninen, Dani Sordo and Kalle Rovanperä to spoil the post-event tequila party either.

“It’s obviously been a great start to the year with the team, and I’m looking forward now to the first gravel event of the season,” says Evans.

“In a way, Mexico is quite like the first two rallies of the year, in that it has its own specific challenges that we have to try and adapt to. And this year, it’s another new surface for us to get used to with a new car. But we found a good feeling in the first two rounds, and we hope to do the same in Mexico. Leading the championship does mean we will be opening on the road on Friday, which will not make it easy for us, but we almost have to forget about that and just focus on the job in hand.”

Closer to home, this weekend’s West Cork Rally has been cancelled because of the coronavirus outbreak, meaning that Osian Pryce, Meirion Evans, Matt Edwards, Tom Cave and James Williams are already on their way home, having not turned a wheel in anger on what was an eagerly anticipated clash of the British and Irish Tarmac rally championships.

And next weekend’s opening round of the 2020 Protyre Motorsport UK Asphalt Rally Championship, the Legend Fires North West Stages, has been postponed, meaning that Jason Pritchard will have to wait before starting his title defence.