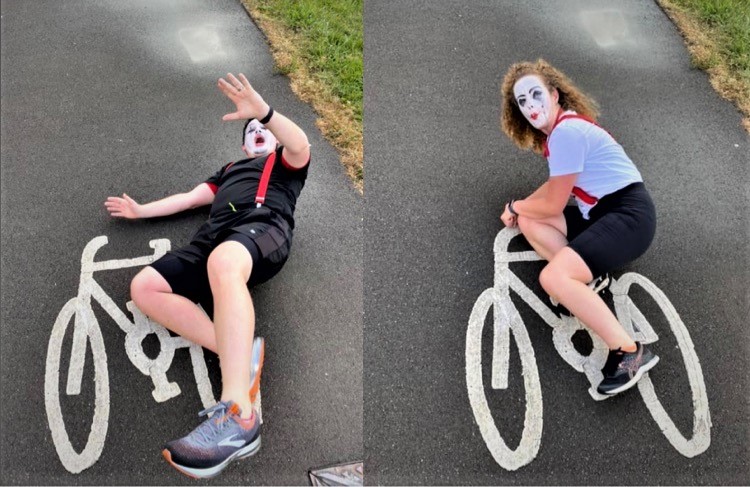 With solo walking and running becoming so vital to everyone striving to stay fit and healthy at present, athletics clubs more used to group activities have had to adapt. For Porthcawl Runners that led to SOLO – a now booming DIY programme of fun runs and more serious challenges, as Carl Field discovered.

Running clubs across Wales have certainly needed to think outside the box over the past 10 months, but few epitomise spirit and togetherness quite like Porthcawl Runners.

The sunny seaside town, famous for its Elvis Festival and the Christmas morning swim, is also home to an ever-growing running club.

With the usual packed calendar of running events shelved due to the pandemic, the normal Saturday morning Parkrun rituals halted, and the twice-weekly group training sessions cancelled for months on end, it has been a testing year for the Green Flash and its members.

There was some brief respite back in the summer when limited number groups were allowed to meet together again for organised activity, but the recent restrictions have stopped runners in their tracks and it’s back to going it alone once again for the foreseeable future.

The lockdown has tested their resolve. But, despite being apart for much of the past year, the club’s members have pulled together and still managed to rack up many miles with plenty of fun along the way.

In fact, since the shutdown last March, the club’s dedicated band of tireless volunteers and over 20 coaches have managed to put on more than 65 virtual running events to keep members engaged, motivated and, most importantly, running.

Remarkably, the club have even been able to grow since Covid hit and now have well in excess of 200 members.

“As a club, we’ve always loved being able to meet up to run and natter; when we realised we weren’t able to do that it hit us hard,” said club chair Lucy Hughes.

“It’s not just our physical health that is supported by running, it plays a big part in our mental health, too.

“Porthcawl Runners has a great committee and some very creative members.

“When we realised we couldn’t run together they came up with the idea of SOLO – a set of challenges designed to be run alone. What made them work so well was the way they often involved fancy dress or the need to take selfies at various points.

“That allowed us to still see each other and opened up lots of conversations on our Facebook page.

“With so many more people taking up running during the first lockdown, word of mouth – and people seeing runners in various crazy costumes – led to people approaching us asking to join.”

Among the highlights so far are:

Members have certainly embraced it, whether it’s wearing something weird and wonderful for the regular Fancy Dress Challenge or, as one member has, actually completing every challenge at home on a treadmill.

“The highlight for me has, without doubt, been seeing some of the outfits our members ran around the town in,” recalls Hughes.

“The ones that stand out are two members as lifeguards one day and mime artists the next and another who, week after week, came up with the most hilarious costumes.

“One day my son came home and said, ‘I’ve just seen that guy from the club running up the road again, he’s carrying a fishing net this week!’

“The members have been very supportive and have totally embraced the challenges and events we have set them.

“When we were allowed to meet up again we had very strict guidelines to adhere to with regards to Covid safety. Whilst the work behind the scenes was pretty onerous, the members followed everything to the letter which meant we were able to run together safely.

“I think it reinforced to us how much we all missed club nights.”

Formed in 2010, Porthcawl Runners had planned to hold various 10-year celebrations last May but Covid put paid to those and the champagne remains on ice, for now.

They are a club with mixed abilities, with ironmen and sub-three-hour marathon runners at one end of the scale, to 70-year-old power walkers at the other end, all enjoying the motivation that the club gives them and supporting each other along the way.

Hughes adds: “We have various groups within the club to help challenge and improve runners whatever their starting point.

“Our Couch to 5K programmes have been really well supported and have got so many people enjoying running regularly, too.

“We are very much a team. The committee have been amazing, adapting to the new ways of working and fully embracing the opportunities.

“The backing from the members when we announce some of our crazy ideas has been overwhelming. It really feels like they will do anything for the club.

📸 Your race day photos are now available to purchase through https://t.co/tFjzkWXuzt!

“I won’t say that to the guy who dreams up most of our events though. Goodness knows what he’d suggest!”

With the club’s members waiting anxiously to see what 2021 will bring in terms of the pandemic, they are already looking forward to next month’s Porthcawl Firefighters Charity Virtual 10k event, which the club have helped organise, to raise funds for Porthcawl Fire Station.

One thing, though, is for sure. They will keep on running.