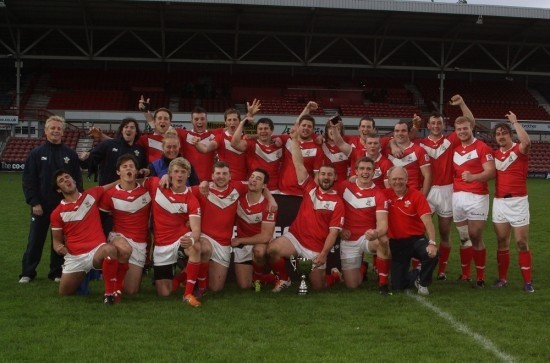 Wales Students coach Paul Emanuelli has announced a 22-man squad who compete against England, Scotland and Ireland in the Student Home Nations in Pontypridd this July.

The squad will be reduced to 20 just before the tournament starts, as per competition rules.

Players from a total of 15 establishments, right through Wales and England, are represented in the side, and it’s a double delight for Dewi Billingham, Jacob Hitchcox, Morgan Cross, Macauley Harris and Fraser Stroud, who were all named in the Wales under 19 training squad last week.

A number of the players, in addition to playing for universities or colleges, turn out for clubs in the Welsh Premier League.

Emanuelli said: “We’ve selected a 22 man squad and will pick the final 20 going into the Four Nations. However the plan is for all 22 to be there and be a part of it.

“The four reserves I’ve named in addition are still important to the squad as I learned first hand last year people may well have to pull out through injuries or other reasons.

“I’m really pleased with the make up of the final squad and want to thank everyone who has attended this years programme.”

All matches in the 2018 tournament will be played at Sardis Road, Pontypridd from July 17-22.

England are the current holders after winning the trophy in 2016 in Edinburgh, their 11th success in this four nations tournament.

Scotland and Ireland have yet to win the tournament but the Scots did take second place in 2003 and 2006.

The tournament has become a launchpad for a number of players in their Super League and international careers. Future Warrington Wolves and Wales and full Wales international Gareth Davies captained Wales Students in the first tournament back in 1994, whilst Phil Carleton and Neil Davies were two future full Wales internationals who played in the 2004 tournament win, Lloyd White, Christiaan Roets, Owain Brown and Rhys Griffiths were just four who starred for Wales in 2009 whilst Izaac Duffy and Yannic Parker played in 2012.

For a full record of the Student Home Nations tournament, go to http://www.walesrugbyleague.co.uk/wrl_rep_teams/students/student_home_nations.