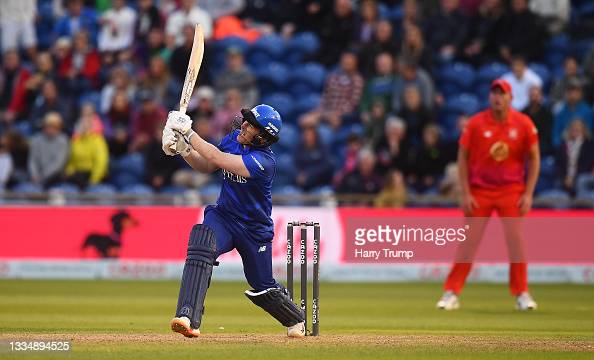 Eoin Morgan believes the inaugural season of The Hundred has changed cricket in England and Wales forever and will improve the chances of his International side’s success in white-ball cricket.

England’s 50-over and Twenty20 captain Morgan has long advocated the country’s most promising young talent being exposed to the pressures of playing at the highest level.

And the man who led his country to World Cup glory in 2019 argues the next generation of English talent will only thrive from their participation in the new format.

The first season of The Hundred ended with Southern Brave and Oval Invincibles claiming victory in the men’s and women’s competitions respectively.

Morgan, 34, had a disappointing campaign on a personal level as his London Spirit team finished bottom of the men’s pile, but could still see the bigger picture.

Morgan led the London Spirit side at Sophia Gardens in the last of the round-robin stage but suffered a tough defeat as Welsh Fire won by three wickets.

“The tournament as a whole has been a huge success. It’s unbelievable to have been a part of it and I’m very grateful it’s happened while I’m still playing,” he said.

“We’ve craved an eight-team tournament for a very long time now and the success of The Hundred and the support it’s had has been astounding, really.

“It’s been magnificent and an unbelievable spectacle to watch. I hope everyone has enjoyed it as much as us – I think the cricket got better and better.

“I think it’s had a big effect on English cricket as a whole. If you look at the number of young guys who have come in and done really well, either as wildcards or as replacement players, there have been some outstanding performances under pressure. That’s what you want to see.

“Equally, there have been some guys who have done really well in County Cricket who have been surprised by the pressure and pace of play. It’s been a really good test for them.

“I think if you look at the 50-over Royal London competition, that also provided opportunities for players who wouldn’t necessarily have had a platform on which to play.

“I think it’s of huge benefit all round.”

England big hitter Liam Livingstone was the standout performer in the men’s Hundred, but younger players such as Harry Brook and Will Smeed took their chances on the big stage.

The England and Wales Cricket Board have said The Hundred reached a broadcast television audience of 16.1million with 510,000 tickets sold for the matches.

There can be little doubt it has helped to grow women’s cricket with 267,000 people watching.

“I’ve been a big fan of this idea since the very beginning. In its first year The Hundred has surprised everyone in terms of how successful it’s been,” said Morgan, who hopes to see the benefits moving forward, starting with the T20 World Cup which begins in October.

“There is no reason why it can’t be bigger and better next year and the year after. I’ve loved being a part of it.”