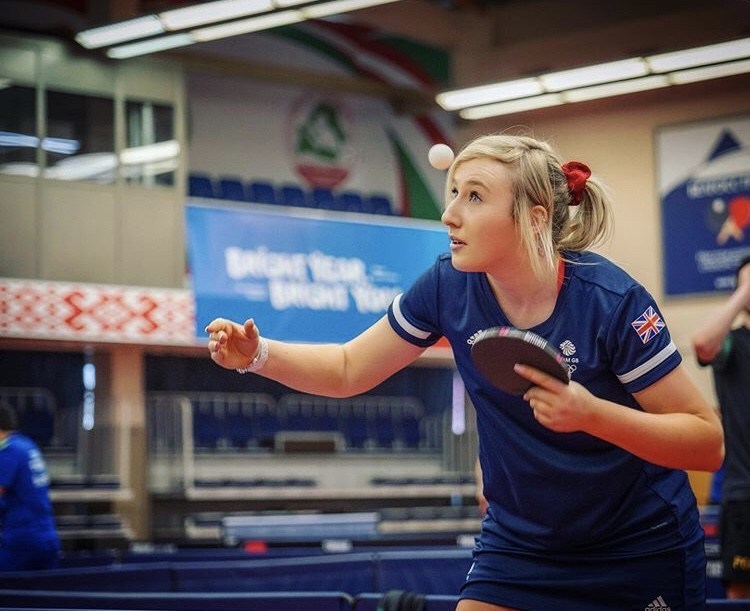 Charlotte Carey bowed out of Table tennis in Minsk in second round. Pic: Team GB

Wales’ No 1 table tennis player Charlotte Carey’s hopes of progressing at the European Games in Minsk were dashed in a second round defeat.

Carey beat Solja when Wales faced Austria in Katsdorf in 2017 and knew another victory would take her into the last 32.

“She is well known,” said Carey of the Austrian. “No one is every really 100 per cent prepared to play against her I don’t think. It is hard to stay calm.

“Normally if I am making mistakes it is because I am getting frustrated I am not playing my best, but I know against a player like that, the idea is not to try and play a good game of table tennis, it’s more like a puzzle, trying to work out the spin.

“She plays with a really strange style. She is probably the only high-level player in the world who plays with anti-spin and long pimples on the forehand.

“It (long pimples) changes the spin, normally if you play with the smooth rubber the spin comes through to you. The anti-spin reverses the spin and long pimples slows the spin down and changes it.

“So, you don’t practise against those type of players ever really, as I said, she is the only one.

“You have got to stay calm and try to figure it out as the match goes on whereas in a normal match you work on trying to play your game, play well for yourself, but against someone like her it is more about taking away the good parts and playing a bit weaker to make them make the mistake.”

But the world No 67 turned the tables this time to set up a meeting with Luxembourg’s Ni Xia Lian.

Ebbw Vale born Carey, who had a first round bye, is the first Welsh player to represent Team GB at a major Games.