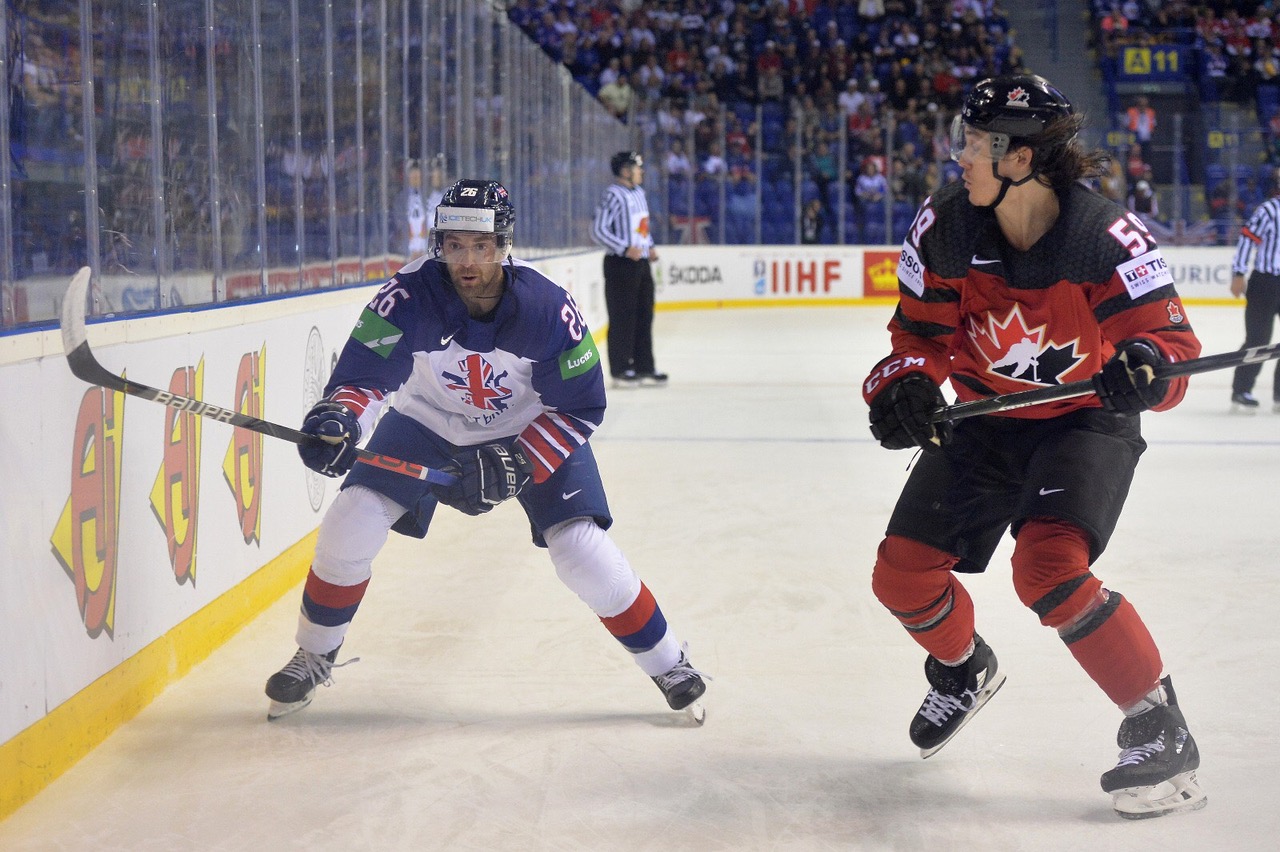 American ice hockey professional Evan Mosey stood in front of his Great Britain teammates at their hotel in Bratislava and gave a rousing rendition of ‘God Save The Queen’.

It was Mosey’s player initiation to the GB group – and that was the start of a magical World Cup week which ended in top flight survival and sheer delight for Britain.

Most American kids learn the song ‘My Country Tis Of Thee’ when they’re around six-years-old, while ‘God Save the Queen’ is scarcely ever learned by children in the USA.

“My little initiation into the team is they made me sing the British national anthem in front of everybody, which is not that bad,” said Mosey. “It’s one of the cooler, easier national anthems to remember.”

Unfortunately there were mixed fortunes for Mosey, who suffered an ACL injury during the middle period of the crucial 4-3 overtime win against France that allowed GB to remain in the elite group.

The jubilation surrounding GB’s achievement soured by the thought of a few weeks of recovery for Mosey after the tournament, but then the bad news turned worse. An MRI scan showed that he needed major work on a knee.

He has had reconstructive surgery on the damage which will keep him out for up to eight months – and he will miss a lot of Cardiff Devils 2019-20 Champions League and EIHL season.

It was a massive blow for the former versatile former Rockford Icehogs and Nottingham Panthers player, who can play effectively on defence or offence.

Mosey is sticking with Devils, who had already signed the defenceman and again showed they are a classy organisation by keeping him with the club throughout this season.

The man from Illinois has no doubts about the future, saying: “I’ll tell you that I will work my butt off to come back playing healthy and better than ever.”

Head coach Andrew Lord believes Mosey will be a major plus for Devils this season even before he returns to the ice.

“HIs positive attitude, energy, silliness and love for the game is infectious and he’ll be cheerleader for us in and around the locker room,” says Lord.

“Right now he’s doing great, working hard on rehab every day. The surgeon is happy and all signs are positive.

“Unfortunately, it’s a long process. Yes, I hope we get a look at him later on this season, but at the same time we must be realistic and won’t rush him.

“If he could get back at some stage during the coming campaign it would be huge.”

“Cardiff Devils’ partnership with Nuffield Health helped get him in right away and we are lucky to have one of the best surgeons in the UK doing the surgery, a procedure that he has done on a few Devils over the years.”

Mosey helped out teammate Matt Pope over the summer by looking after his dog and is a regular at the swimming pool opposite the Viola Arena.

“I was dog-sitting for just over three weeks,” said Mosey. “It worked out well because the dog came to me just as I was able to start walking.

“At 7am each day we would go to the barrage and she’s go swimming.

The @championshockey fan challenge is back with a lot of new features and games! @evan_mosey just signed up to show you how simple it is & who to vote for 😉😈 #FansGoBeyond

Head to https://t.co/fwlFyWh7Fy now to register, vote and play! pic.twitter.com/O36LLZWRRv

“Now I’m in the pool at 11am most days for my aqua recovery with about 4,000 little kids. At the end I treat myself by going down the water slide – I’ve earned it by then.”

Mosey has been overwhelmed by the love and support he has received since his injury and says: “Thanks to everybody who has reached out to me.

“It’s nice to have friends, fans, Cardiff Devils and especially my family helping me through this. It’s not how I wanted to spend the summer and the start of this season.

“My recovery is going pretty well. I was on crutches for a month, but now I can walk properly.”

He watched with interest as head coach Andrew Lord completed his recruitment for 2019-20 and says: “The new guys all bring different aspects to team.

“We have hugely skilled guys on offence and defence.

“The plan for our team is to win a lot. We want to win trophies. We have good players, good characters and good guys.

“We want to gell as quickly as possible and it’s been pretty seamless. It’s going to be exciting moving forward.”

Mosey talked about two new Devils forwards, Mike McNamee and Masi Marjamaki, saying: “It’s tough defending against big guys like that, particularly when they come at you at full speed.

“They are just as fast as Gleason Fournier and Sean Bentivoglio and when those guys skate at you they are going to end up going to the net regardless of what any D-man does.”

Mosey’s journey from youth sports in Illinois to playing for Great Britain at the World Championships started a generation earlier. His father and grandparents were born in England, making Evan eligible for a British passport.

He was one of five players born in North America to skate for Britain in Bratislava and says:”It was a mind-blowing experience.

“You have to take a step back because it’s so overwhelming just getting on the ice.

“You line up for a face-off and you realise you’re next to Patrick Kane (Chicago Blackhawks). It’s like, ‘What’s going on right now?’

Mosey is settled in the UK and says: “About the only things I miss are Chicago-style pizza and Portillo’s hot dogs, which are huge in Chicago.

“I also miss Toppers Pizza and Michelob Golden beer. You can only get that in Wisconsin and Minnesota and I haven’t had a Michelob Golden in years. “I’d like to try it and see if it’s as good as I thought it was when I was in college.

“Other than that, the UK is my home away from home and I really enjoy it here.”

GB are in Group A in Lausanne for their second successive year in the top flight, alongside Belarus, Canada, Czech Republic, Denmark, Germany, Slovakia and Sweden.

Pete Russell’s side will start against Germany – as they did last season in Slovakia – with the two sides going head-to-head on Saturday, May 9.

The top four teams from each group will advance to the knockout stages, starting with the quarter-finals.