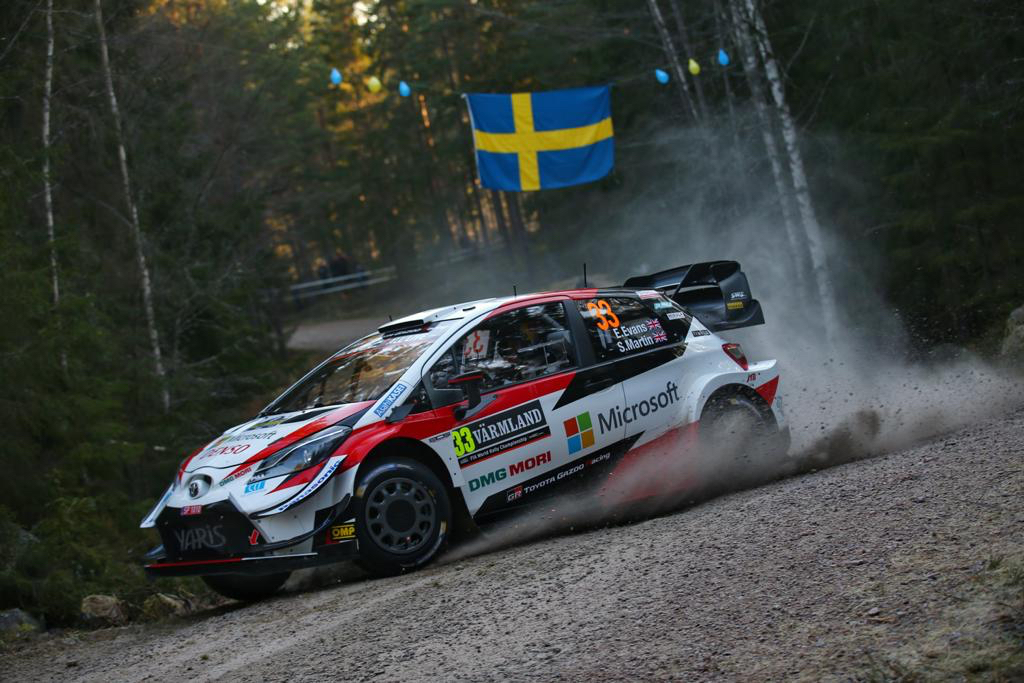 Elfyn Evans attacks the Rally Sweden shakedown stage this morning – but where is the snow?

Elfyn Evans faces one of the most difficult challenges the FIA World Rally Championship can throw at him this weekend – a shortened Rally Sweden without snow!

You’d think that would make the event easier, but far from it.

With high snow banks to bounce off and thick ice for the studded tyres to grip into, Sweden is one of the fastest and most spectacular rounds of the series.

But it’s been an incredibly mild winter, and without the frozen conditions the event becomes an unpredictable high-speed lottery on rapidly deteriorating soft gravel tracks. And when the gravel rips the studs out of those tyres, there will be very little grip left when cars hit what wintry road conditions remain.

It would be safer to cancel the event, but with Rally Chile already canned the last thing the WRC wants is the series reduced to 12 rounds. And if Rally Sweden was scrapped, it would mean that two out of the last three WRC rounds have not run, thanks to forest fires in Australia late last year. The WRC promoter certainly doesn’t want that to happen.

But with only four drivers from outside Scandinavia ever to have won Rally Sweden in the last 70 years, the lack of snow might just play into Evans’ hands. He finished a career best fifth in Sweden last year, and returns having led last month’s Monte Carlo Rally on his first rally for Toyota.

This weekend’s event will be played out over 10 special stages, covering just over 100 stage miles – around half the length of a normal WRC round. That already means that there will be little time to recover from a mistake and the pace will be even more flat out from the word go than it normally is. Plus, there is a real danger that more stages will be cancelled once the event gets underway.

But as it stands now, Rally Sweden will start tonight – although the short opening stage around the trotting track in Karlstad was cancelled yesterday. Friday features just four stages, two forest tests in neighbouring Norway, a forest stage in Sweden and a mid-afternoon spin around the short Torsby Sprint stage. Saturday’s itinerary is exactly the same as Friday’s, although it is these repeat runs over what could be unsafe rutted gravel roads that are at risk of cancellation. Sunday has just one stage ran twice, although one wonders whether the first pass will be sacrificed and saved for the closing Power Stage, which is broadcast live on television around the world. Mother Nature will play a big part in making that decision.

But regardless on the conditions in the central county of Värmland this weekend there are WRC points to be won, and Evans will be searching for as many of them as possible, to add to his excellent third place finish he achieved in Monaco.

“I’m really looking forward to Rally Sweden,” says the Dolgellau driver. “The car was feeling really good in our winter testing on snow, so I’m hoping for another good event there. Rallye Monte-Carlo was overall a positive start for us in the Toyota Yaris WRC, even though our result could have been even better. Road position can play a big part in Sweden, depending on what sort of conditions we’ll find: if there’s a lot of loose snow, then there is a big advantage for those starting further back. But like any other rally, we’ll go in and do the best we can from the first stage.”