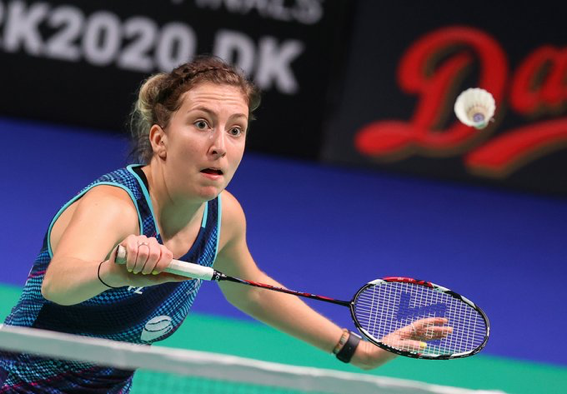 Until last week, Jordan Hart used to be Wales’ leading badminton player and Britain’s No.2. Now, though, she belongs to Poland after quitting Welsh sport over what she claimed was a lack of support. Speaking exclusively to Dai Sport, she tells Fraser Watson why she felt the need to leave Wales.

Changing location is one thing, changing the country you represent is another.

Which is why the decision that Jordan Hart has made – to represent Poland instead of Wales at international badminton tournaments – ranks as the most difficult of her career by far.

“I am so, so patriotic, so there were a lot of tears and stress over this,” admits the woman who was formerly Wales’ top-ranked female player and No.2 in the UK.

“This means that I have given up my chance of representing Wales at major championships – Europeans, Worlds, Commonwealth Games, or the Olympics with Team GB.

“I didn’t know how my new team-mates would feel about this move, and also the team-mates that I leave behind with Wales – but I’ve had huge support from both sets of players.”

Hart, 26, was just 14-years-old when she first wore red at international level. In the decade that followed her debut, she made no secret of her love of playing for her country.

She’s frequently talked with pride about her Pembrokeshire roots, and praised the coaches and family members who started her out on the path to professional sport.

But as her career has progressed, support from her governing body has dwindled.

In 2019, on the back of her most successful season to date, she was rocked by the news that Badminton Wales would be cutting a third of her funding.

By that point she was already living in Coventry and playing her club matches in France, simply to have access to high level facilities.

Last year, she relocated to Poland to have access to their national training centre and team members. The country’s badminton set-up had made a favourable impression on her when she won the Polish International in 2019,

The move has proved a fruitful one, and further frustrations with her own national set up culminated in a brave call.

It’s not one she has made without sacrifice.

“I was due to play the European Championships in Ukraine at the end of April, so news started to get out when people saw that I had withdrawn from the tournament,” she says.

“It’s a huge sacrifice to make but I need to be in a full time environment where I can access all the support mechanisms that a professional player needs.

“I also have felt for a long time it’s been ‘us against the world’ in terms of me, mum, dad and my coach Steve (Butler).

“And that is such a huge strain when you’re just trying to be the best badminton player that you can be.”

The situation had essentially become now or never. Had Hart opted to play in the Ukraine, she would have been tied to the Welsh team until 2024.

There was however, no guarantee of any funding beyond the Commonwealth Games in Birmingham in 2022.

“A professional athlete needs to know that there are plans and adequate resources behind them for future years.

“This is why it’s so important to thank my sponsors – Capital Roasters LTD of Pembroke Dock and FZFORZA/Victor – for continuing the support that they give me to enable me to pursue my dream even in these crazy times.

“I had a realisation that I only have a short time left in my playing career and to maximise this I need to be in a full time environment where I get continuity and good variety. And to enjoy my environment and feel supported and part of a team pushing for the same things.”

But her change of status means she won’t have access to the same variety of tournaments than had she stayed under the banner of Wales.

Her first tournament she will play under a Polish flag will be the India Open at the beginning of May.

In a statement Badminton Wales said simply that they wished her all the best and described her decision as “exciting”.

It read: “Jordan Hart, Wales’ #1 player, has elected to leave the Welsh squad to pursue her career in Poland.

“The team at Badminton Wales respect this decision and look forward to watching Jordan’s continued success on the International Circuit. Jordan’s departure heralds an exciting step in her playing career, and we wish her all the best.”

So, now is the time for Hart to look forward. And while it’s easy to dwell on the sacrifices, not least her hopes of the Commonwealth Games next year, she can also afford herself some excitement at what’s in store.

“It’s a full time training environment here – in Wales it’s only six hours per week which is massive. Plus here there are support staff – physios, strength and conditioning – plus swimming pool and gym access.

So HAPPY to put a good performance on yesterday against World Number 16 from USA ⬆️⬆️
Especially after a crazy few days which still seems to be continuing right now 🤯
Looking forward to my now home tournament in Poland next week. Polish Open 🇵🇱 pic.twitter.com/tQyM3UgZ0T

“Even small things. Now, I have the possibility of having a coach behind my court at some international tournaments, whereas before we had to pay for my coach to travel around the world with me.

“I’m going be in an environment where development of players is at the forefront of everything that happens.”

Hart has always been a modest, grounded character. For her to undertake a decision of this magnitude should serve as a wake-up call to Badminton Wales about the provisions on offer to their potential world class athletes.

And while she reiterated this week that she “will always be just a girl from Pembroke Dock” – Hart has offered to support any player who finds themselves in a similar situation to her.

“For any sports person, trust is a major part of success and if you feel under-valued then you have to surround yourself with people who bring positivity and believe in your goals and aspirations.

“Without trust it can really effect your mental well-being and for some people could affect their whole career. I only found this when I was 23.

“My advice would be as soon as you feel undervalued then it’s so important to go and seek out the right people who can help you.”

Hart seems to have found those right people. Wales’ loss appears to be Poland’s gain.