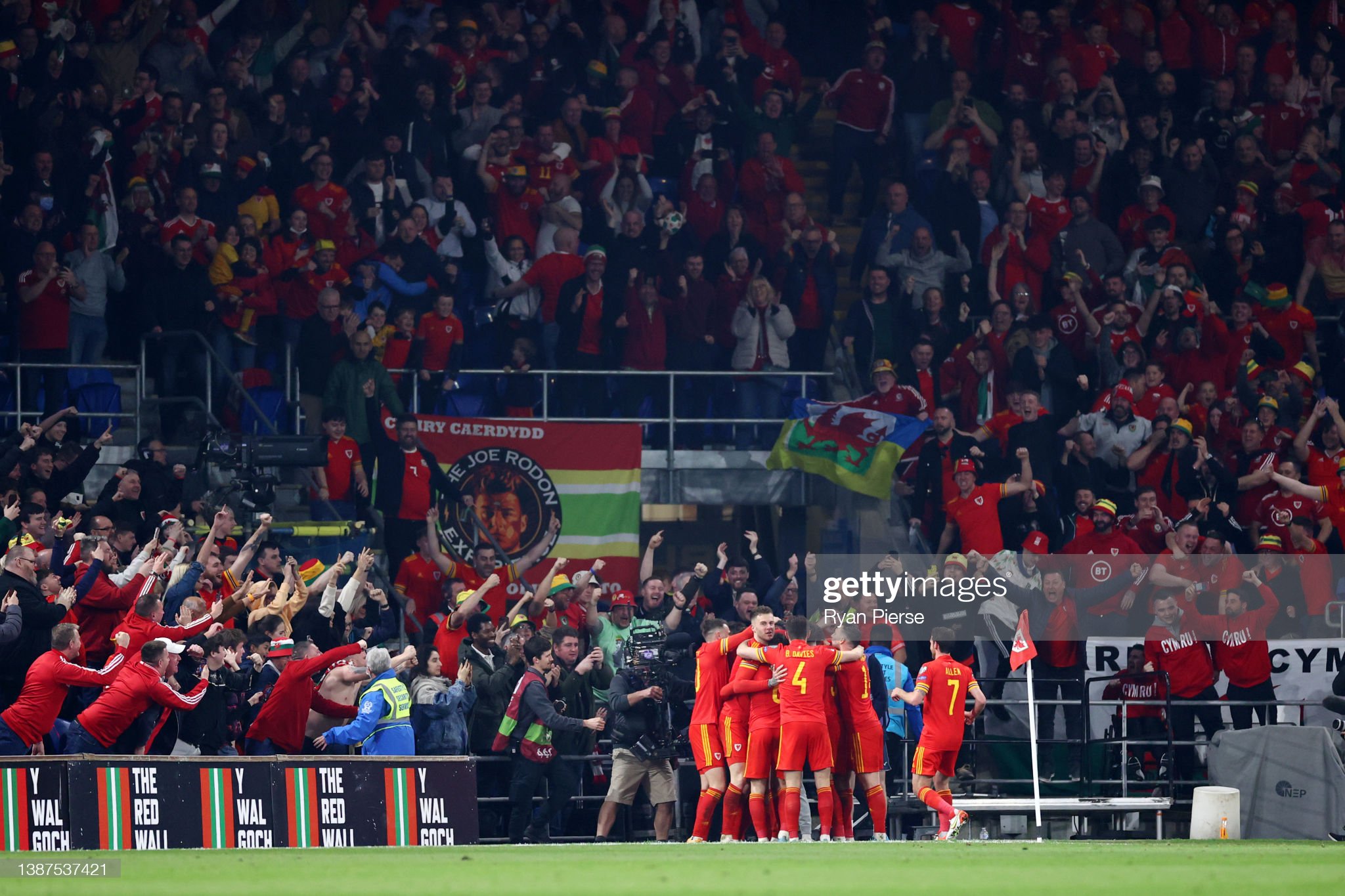 Watching Wales play football on TV for nothing, and in the Welsh language, is about to become history. The FAW have signed up for a brave new world of Nordic streaming channels with monthly fees, so untested the service doesn’t even exist yet in the UK. Feeling let down? So is, Dan Parker.

So, from 2024 broadcast access to Wales (men’s) international football is set fall behind a paywall.

It’s fair to say the news has gone down like the proverbial cup of cold sick with Wales fans, and rightly so.

This is a deal that short-changes supporters, and could have catastrophic consequences for the game in Wales moving forward.

The immediate question is what this will mean for S4C, which has provided a dedicated and popular Welsh language broadcast package for the national team since 2003.

The broadcaster has confirmed that discussions are ongoing with the FAW to “further clarify the situation regarding Welsh language commentary in future Wales matches”.

Time will tell whether those conversations bear fruit, but in the interim fears will mount that the Welsh language could well be sidelined as a red button option – as happened when Wales’ autumn rugby internationals moved to Amazon Prime in 2020.

Bora da. UEFA sell the centralised rights for all 55 national associations in Europe. We are in discussions with them re Welsh language, promotion of domestic game internationally, free to air matches of the @Cymru national teams etc. Will update ASAP. https://t.co/pxeNlC6U5X

This wouldn’t be the first time that Welsh football has suffered as a result of a broadcast deal.

The consequences of the move from BBC Wales to Sky Sports in 2004 had long-term repercussions in terms of public engagement with the national team.

No international side suffered a bigger dip in home attendances over the course of the noughties: Wales went from selling out the Millennium Stadium for the visit of Azerbaijan in 2003 to barely getting 17,000 in the ground for the visit of the same opponents in World Cup qualifying five years later.

And home attendances under 10,000 were still seen well into Gary Speed’s tenure in charge.

The on-field malaise that set in from the latter days of the Mark Hughes era undoubtedly contributed to the broader picture, but the general sense of apathy that permeated those years ultimately stemmed from a lack of public connection with Team Wales – something that was clearly compounded by diminished access.

Even now, in a golden era when the bond between Wales’ ‘Red Wall’ and the first team is stronger than ever, attendances at Cardiff City Stadium can still underwhelm.

Vital home World Cup qualifiers against Belarus and Estonia last autumn were not played in front of full houses, and the FAW will have been quietly disappointed with the swathe of empty seats on display at the feel-good March friendly against Czech Republic.

Contrast that to a crowd of nearly 65,000 who saw an experimental, out-of-sorts Wales rugby team play a throwaway friendly against Fiji in Cardiff last November.

This seems like a very bad move. Selling the rights to #Wales games to a streamer that doesn’t even exist yet? The distillation of football across multiple TV platforms is killing fans with unsustainable cost burden.

Granted, that game was actually behind a paywall too, but there’s little doubt that the Welsh public’s appetite to get behind Wales in the oval-ball code is whetted by regular exposure: everyone watches the Six Nations, helped by the fact that everyone CAN watch the Six Nations.

You could reel off a list of at least 10 current Welsh rugby internationals who are household names from Hafodyrynys to Haverfordwest.

Realistically, fewer than five (and probably only two) Welsh footballers would fall into the same category.

We’re a better team now than we were during the Hughes era, but the casual viewing public were arguably more aware of the likes of Speed, Savage, Bellamy, Hartson, Davies, Earnshaw and Gabbidon than they are of Ampadu, Rodon, Ward, Roberts or Moore now.

The simple reason for that is that they could watch them in a Wales shirt far more regularly.

Here’s the challenge facing the FAW. Do you aim to consolidate what you’ve got – a bankable and vociferous base of support – or prioritise growing the game in Wales?

If we’ve got this right, the FAW opted to throw their lot into a centralised negotiation for TV rights rather than negotiate their own deal, with the upshot that Cymru games will only be available via a streaming service rather than on S4C.

The first option might be tempting, especially when big-game atmospheres at the Cardiff City Stadium are so electric at the moment, and results are so positive (we’re one game away from a World Cup, for goodness’ sake).

The FAW have done a very good job in catering to the interests of the Red Wall over recent years, but ultimately their focus should be on a wider cohort of potential supporters who lie outside its strong foundations.

There have been signs that association’s recently appointed chief executive Noel Mooney gets this, particularly in his commitment to supporting the growing interest in Wales Women (aided, of course, by free-to-air TV coverage) and addressing chronic underfunding of the grassroots game – an issue that has been highlighted painfully by clubs like Ebbw Vale Town over recent years.

But the Viaplay deal flies in the face of that admirable objective.

It will effectively cut tens of thousands of Wales fans out of the picture; forcing supporters to fork out for yet another subscription package during a cost-of-living crisis, and pushing a generation of role models out of view of aspiring young footballers ahead of what is set to be an historic decade for Welsh football on the field.

Thus far, the FAW have sought to sidestep public anger over the Viaplay deal by hiding behind UEFA’s centralised broadcasting rights agreement.

Whilst no-one would question UEFA’s predilection for a quick, conscious-free buck, the FAW are far from blameless in this.

They are a participating association and could have voiced their objection to the deal before it was announced.

Did you hear anything? Me, neither.

Instead, they gave it a hearty welcome on their social media channels.

Did the association hold meaningful discussions with the S4C (or for that matter, BBC Wales) before the deal went through?

The distinct tone of complete surprise in S4C’s response to the announcement this week seems to suggest otherwise.

Behind their dignified corporate response, there is a real sense of betrayal for a broadcaster that hikes up and down the country every week, televising Welsh domestic football.

As has happened with rugby, they are again left wondering what’s the point of promoting the grass roots stuff if the governing body flogs the national team coverage to whoever puts the most coin on the table.

And if the FAW are dissatisfied with the central UEFA broadcast rights agreement, have they considered if it’s worth persisting with?

FACT: @S4C is the natural home of Wales football @Cymru 🏴󠁧󠁢󠁷󠁬󠁳󠁿 and we the fans love the coverage ⚽️ @UEFA @GarethBale11 🏴󠁧󠁢󠁷󠁬󠁳󠁿🏴󠁧󠁢󠁷󠁬󠁳󠁿🏴󠁧󠁢󠁷󠁬󠁳󠁿 https://t.co/7oKct9runL

It’s notable that the FA in England are not party to the Viaplay deal, meaning that from 2024 it will be even easier than it is now for Welsh football fans to watch their old rivals over the Severn on ITV on nights when their home country is also in action.

There’s not just a lot riding on this for Welsh football, but for the FAW themselves.

They need only look to the recent past to see that the broadly positive relationship that has developed between the association and the Welsh footballing public is something of an historical anomaly.

Ok, the acrimonious nadir of the 1990s is thankfully long behind us, and it’s hard to imagine today’s FAW appointing a coach as publicly deplored as Bobby Gould.

Or, disgracefully pushing one of the country’s biggest club sides into exile in Gloucestershire out of bloody-minded spite.

That said, and despite their continued insistence on innocence in the debacle, the furore surrounding the Viaplay deal could see the FAW move from solid ground to ice which will only grow thinner.

More importantly, Welsh football is about to pay a price far higher than a monthly streaming subscription fee.