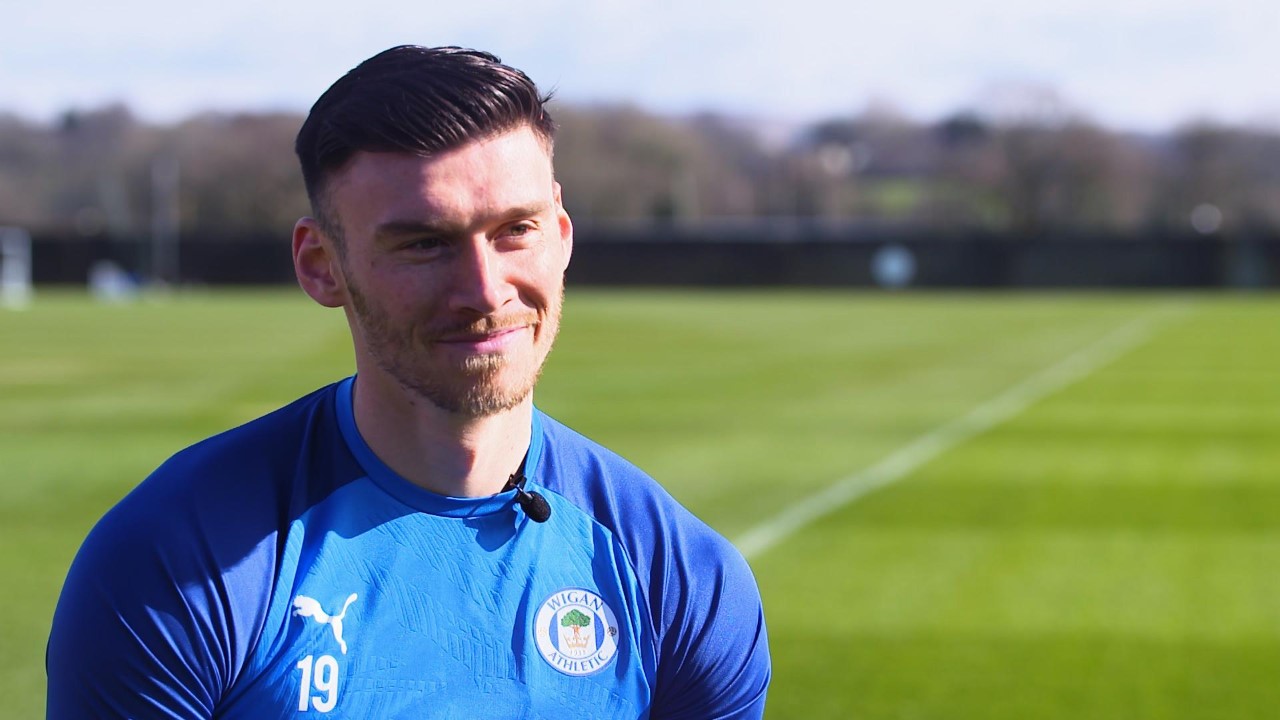 Kieffer Moore insists he needs to keep his form with Wigan. Pic: S4C

Kieffer Moore is a man who certainly cannot be accused of resting on his laurels.

The Wigan Athletic frontman made a huge impact for Wales during the second half of their successful UEFA Euro 2020 qualifying campaign, netting twice in four games and providing an attacking focal point for Ryan Giggs’ side.

Most punters would agree that the 27 year-old’s exploits in a red shirt over the last six months have already secured his place on the plane for this year’s finals, which are scheduled to be held across Europe.

No wonder Wales fans sing “Feed Me Till I’m Kieffer Moore” and “Keiffer Moore For Ballon D’Or” whenever he’s on the field.

Having scored six goals in the Championship so far this season, the six foot five striker is intent on finishing the campaign strongly with the Latics and further strengthen his case for Wales selection.

In an interview with S4C’s Mwy o Sgorio, Moore, who qualifies through Wales through his grandfather who lived in Llanrug, said: “You could say that the Euros are on my mind but I don’t want to think about it too much. I’ve got a job with Wigan and my full focus and concentration is on here.

“It’s always keeping me on my toes, knowing that I have to put in performances here just to get a call-up with Wales. I wouldn’t like to think that I’d get a call-up on the back of what I’ve done before, I like to be in form, firing and deservedly earn my shirt.

“That’s how you put yourself in the position to be picked. You’ve got to be the best you can be for your club and if you’re flying high, you’ve got every chance of being picked.”

Not even Moore himself could have predicted the spectacular breakthrough he made for the national team. Having made his debut in a friendly against Belarus in September, Moore was thrust into the starting line-up for the final four qualifiers, from which the Dragons secured a vital eight points.

He added: “Before making my debut, I was watching and thinking about what I could add to the team and what I could bring. My game’s not all about scoring goals, it’s about causing defenders problems, and I try and bring a lot of people into the game.

“I believed that I could bring something different, the physical aspect, holding the ball. And for my size, people don’t think I can do but I’m a good mover, I can run with the ball, I can run the channels and just cause a nuisance really.

“Thankfully I got given that chance and I took it. It’s all about those moments and you get given a chance, so it was all on me to take it or not take it.

“If I was to look back on it, six months ago I hadn’t even played a game and then I managed to play the last five games, including the friendly. I’ve scored some goals and I’ve won some good games.

“I look back with massive pride and it’s some achievement. It just felt like, right place, right moment. Everything was there for me. Even that goal against Slovakia where the ball came up the air – I already knew I’d scored before I’d even headed it.

“That night against Hungary was unbelievable. I had my whole family there as well and to share the moment with them was surreal.

KIEFFER MOORE: ‘I look forward to playing many more games.’ ⚽

Full interview with the @LaticsOfficial and @Cymru forward this Wednesday at 22:00 on @S4C pic.twitter.com/iXhT9FFpfc

“I look forward to playing many more games, so long may it continue. I haven’t lost yet, so hopefully I can keep that run!”

With less than three months to go until the Euros, Wales play their first matches of 2020 in a home double-header against Austria and the USA later this month, with both matches being shown live on S4C by Sgorio.

After a four month international football hiatus, Moore is looking forward to returning to the Wales camp.

“It’ll be good to hook up with the boys,” he added. “These friendlies will be massive, not only for confidence. My route in was a friendly so it could be for others too.

“It’s just about getting us back playing on the same page, working for each other again and hopefully get some results.”

Watch the Kieffer Moore interview in full on Mwy o Sgorio, tonight at 10pm on S4C, or on demand on S4C or BBC iPlayer. English subtitles available. Sgorio will also be showing both of Wales’ international friendlies in March – Wales v Austria on Friday 27 March, and Wales v USA on Monday 30 March.