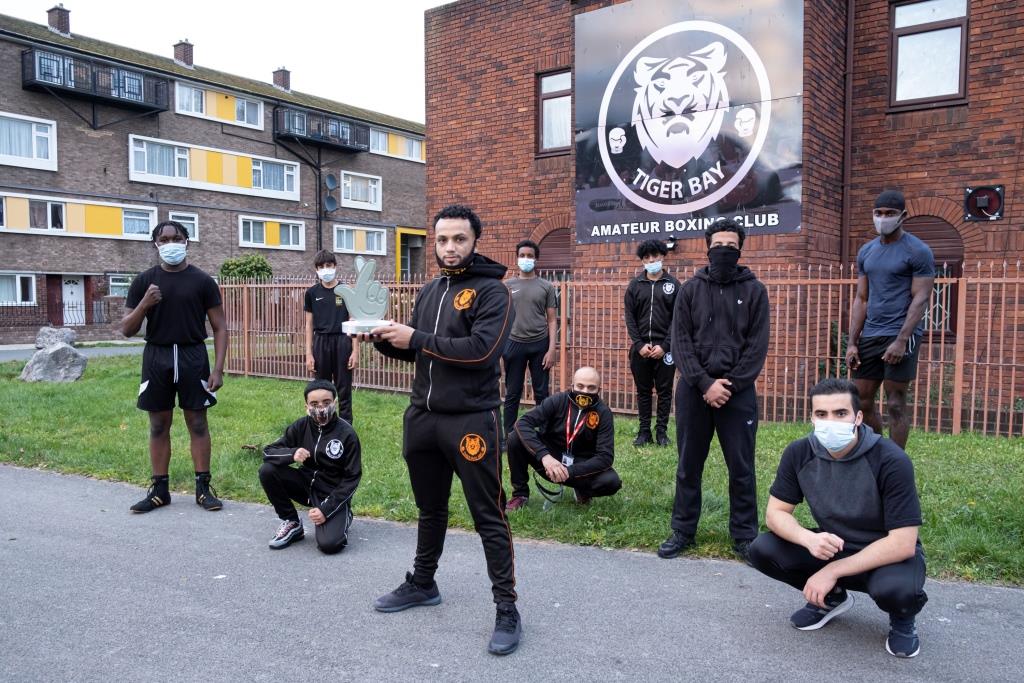 Tiger Bay has always been an evocative name when it comes to Welsh sport, with footballers, rugby players and boxers all emerging from the old docks area of Cardiff. Wasem Said is making sure that tradition continues, although the roots of that success might stretch further than ever before as he tells Graham Thomas.

Wales’ next Joe Calzaghe could have his roots in Sudan, Yemen or Somalia instead of Newbridge via Sardinia, according to the award-winning boxing coach trying to unearth new champions.

Wasem Said has just picked up a UK-wide honour in the sports category, handed out by the National Lottery Awards for 2020.

It was given in recognition for work done outside of the ring – inspiring youngsters to lend an active helping hand in their community – but Said, the 29-year-old mentor to fighters at Cardiff’s Tiger Bay Amateur Boxing Club, is firm in the belief that character inside the ropes simply reflects what goes on away from the gym.

For him, the same commitment and selflessness that makes a fighter hold up the pads for his mate, has ensured they have delivered 120 food boxes a week to vulnerable families during the pandemic.

Tucked away off Bute Street and a stone’s throw from Canal Park – where Tiger Bay Football Club are based – the boxing club can be found behind the mosque at the South Wales Islamic Centre.

“It’s maybe one of the most diverse boxing clubs in the world. But there’s a rich history in Tiger Bay that is multi-national. It goes back a long way for some – back to their forefathers – but for others, it’s a lot more recent. Their journey here is still fresh.

“The main challenge here is to keep the boys on track. That takes some doing. But whatever I put in making sure they stay focussed, it’s not as much as they put in. That’s why we have been so successful.”

Success can be measured in many ways. For some, it will be the shiny National Lottery award that marks out Tiger Bay’s coach as the only winner from Wales in any of the categories this year as well as the overall UK winner in sport.

For others, it might be the fact that the club has 300 registered members – a logistical feat in itself, given the small confines of the gym space available – even though they have only existed for two years.

For the boxing hard-core, though, it could well be a case of, show us your medals. In answer, Said – a former boxer, turned nightclub doorman, turned coach – can point to two novice Welsh champions in Kamil Ernest and Saad Mohammed.

Both represent the future of the club in Butetown and perhaps, one day, Welsh boxing itself.

“They are good boys, both of them. They’re not names as yet, but that could come. It’s like I say. Reputations don’t mean anything as there’s always a bigger dog just around the corner.

“The main thing is to remain humble and work hard. If they do that, then who knows how far they can go? It’s the same for all the boys here. We’re just starting out. This is just the beginning.”

Said started the club in tribute to one of his own boxing mentors, Pat Thomas, the former Welsh light-middleweight champion, who fought world class boxers of the quality of Herol Graham and Tony Sibson back in the seventies and eighties.

Thomas coached youngsters around Cardiff Bay, but there was no focal point for their training until Said began the Tiger Bay club in a building at the back of the mosque, having been granted personal permission by the elders.

From a handful of fighters a couple of years ago, the club has blossomed, bringing in more and more members attracted by the combination of fitness, self-discipline and a sense of positive community engagement.

“We’re pretty full, nowadays,” says Said. “There’s only room for around 30 or so boys at a time, so the operation has to be well organised from Monday to Friday.

“We need a bigger venue, really, to allow us to grow further because it’s obvious to me this is just the beginning. We keep people fit, we get them motivated, we take them off the streets, and we help try and take care of other things going on in their life, too. We’re more than just the boxing.

“We’ll have to do it ourselves, though, even if others get involved. I’m the kind of of guy who doesn’t want to sit around waiting for things to happen.

“I just don’t believe in standing around just waiting for the government to put something on your plate.

“You have to make things happen yourself. If you do things yourself, then people in the area take notice. Of course, you need help along the way, but you have to take control and drive it, otherwise it’s just a token gesture from someone else. Real change involves people seeing their own power.”

Said admits his activisim could well have turned out differently. His energies could have been channelled in a different direction.

He father died when he was young, his brother went into the army and he admits: “I had no guidance, really, and I got into a few scrapes.

“Sometimes in life, we lose ourselves and we mix with the wrong crowd. I did some wild stuff and I did some  . . . misleading stuff.

“That’s why I believe in this community. They trusted me and guided me when I needed it. And this is what I say to young guys now – it doesn’t matter what kind of guy you are or have been, what matters is that you give back to your community and you have trust in people around you.

“The fact is that in Butetown there is a lot of drugs and knife crime and so that stuff can easily come into your life. We need to have places where we can show people that life can be different to that – more disciplined, more peaceful and more fulfilling.”

Said hopes the National Lottery award can raise awareness of Tiger Bay Boxing Club’s success and enable them to reach new goals in the future.

“This award is for everyone in Butetown and I hope it instils confidence in the young people we work with, and shows them that hard work in your community really pays off.

“We don’t normally receive positive awards like this in our community and this is a real boost for us. Tiger Bay ABC is only at the start of its journey and I hope this award can propel us towards bigger and better things for the people of Butetown in future.

“A small project like this makes a big difference in people’s lives and the National Lottery has played a key role in helping us to grow and build. I’d like to say thank you to National Lottery players for this crucial support.”

Big thank you to @davidhaye for the message and wise words given to us all at the club. Keep up the work young kings and queens at Tigerbay! Upwards and forwards #butetown #cardiff pic.twitter.com/0EutBY3f6f

Among those who have offered their congratulation this week is Britain’s former world champion David Haye, now involved in boxing as a manager and promoter.

“That was amazing. It means a lot from someone like him and the boy here all know about him, so they were pretty excited, too.”

The Hayemaker has yet to visit Tiger Bay. But once the lockdowns and the restrictions are out of the way, an invitation will be issued.

One thought on “Finding The Next Joe Calzaghe, With Wasem Said . . . And A New Sense Of Purpose In Tiger Bay”