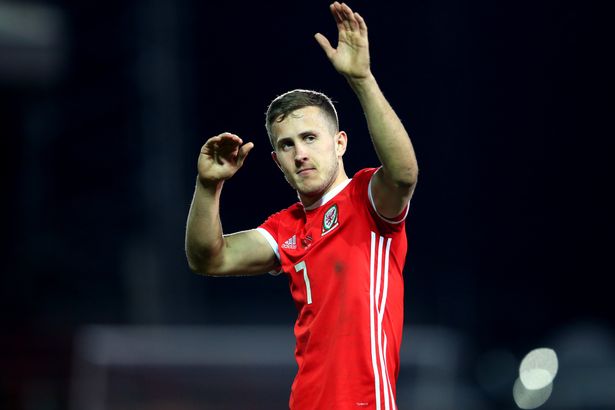 Will Vaulks, an energetic, effective central midfield player, is ready to somersault past Derby in the English Midlands – and land firmly at Cardiff City Stadium.

Wales international Vaulks has committed to the Bluebirds, preferring a switch from South Yorkshire to South Wales despite interest from Derby.

He has agreed terms on a reported £1.5m transfer from Rotherham United. Vaulks will rekindle memories of prolific goalscorer Robert Earnshaw, midfield enforcer Aron Gunnarsson and left-back Andy Legg when he pulls on a Bluebirds shirt.

The man from Merseyside – born on the Wirrall – loves to turn somersaults in the style of ‘Earnie’ when he scores and has a long throw to rival ‘Gunnar’ and ‘Leggy’.

Vaulks sees his future in Wales, having earned a call-up by national team manager Ryan Giggs and committed to the Bluebirds.

It has, though, been a long, hard journey for Vaulks, who was once paid 33 pence a week to play professional football!

That sounds ridiculous, but Vaulks insists that figure is spot on.

He was tipped to have a successful career before being released by his local club, Tranmere Rovers, at the age of 19. Former Cardiff City striker Ronnie Moore was the manager who told Vaulks he wasn’t wanted at Prenton Park.

It seemed his career had stalled almost before it had started, but Vaulks accepted an offer from Scottish club Falkirk.

For several months he was surely the lowest-paid player in football and says: “I was always bigged up when I was young, told I was going to be the captain of Tranmere.

“It went from that to being released when the new manager came in. But you have to stick at it.

“Steven Pressley at Falkirk saw something in me, gave me that chance and I had to take the opportunity.

“I was paid 33p a week for the first three or four months. That was because they had to put me on the payroll.

“Falkirk put me in a flat, while while I borrowed 80 quid a week off my dad to survive. It was probably the worst part of my life from the point of view of my mental state. I had no money, I was in a little flat, had no mates and I was four hours from home.

“It was tough. Really tough at times. I was expecting to go there and play straightaway. That’s what I was told, but it didn’t come to fruition so I had to wait and eventually I was given my chance. I’ve always tried to believe in myself because I knew I was good enough.

“I remember my mum coming up to see me at one point and I thought ‘I don’t know if I can keep doing this’. It was depressing.

“But I hung on and it worked out in the end.

“Falkirk is a little town literally bang in the middle between Glasgow and Edinburgh, the same distance from both. The club have passionate fans. A great club.

“In the end it proved to be the best part of my career up to that point. I really enjoyed it, winning games, being up there and it proved to be a great experience. I’m grateful to Falkirk for giving me my chance.

“My career was on the edge, but Falkirk gave me a chance and that’s why that club is special to me.”

Vaulks, who qualifies for Wales through his Bangor-born mother, made his international debut in March during a friendly against Trinidad and Tobago.

He is keen to have a long-thrown competition against Wales’ captain Gareth Bale, saying: “People have a snobbery about long throws, but if you have a free-kick there you’d put in the box.

“So what’s the difference? I don’t practise it too much because it hurts to do it.

“I haven’t had a competition with Gareth yet, but we’ll have to at some point.”

Keane, realising the throw is a potent weapon, attempted a spot of gamesmanship by trying to block Vaulks’ path as he prepared to hurl the ball into the Forest penalty area.

Derby remain keen on Vaulks, but the midfield player is adamant Cardiff is his preferred destination. He has spent the last three seasons with Rotherham, making more than 130 first team appearances.

The tenacious, aggressive midfield player has agreed terms with the Bluebirds and has already committed to the transfer.

Vaulks played at centre-half when he progressed through the youth ranks at Tranmere Rovers and stayed at the back over the next four years.

Falkirk manager Peter Houston encouraged Vaulks to play in midfield and he says: “I had a little spell at right-back before moving into midfield.

“The gaffer (Houston) wanted a bit more steel in the middle, somebody who could get about the pitch. Then I started scoring goals there and doing okay so I stayed there.

“It was a weird one because I wasn’t out of the team, I was playing at the time. It just seemed like a natural step forward. It’s not ideal if you keep changing positions as I have done quite a bit in my career, but I prefer midfield.”

Best moments on a football pitch?

‘Scoring on my debut for Rotherham in the opening Championship game of first season against Wolves (2-2 draw in August 2016) after being away for so long and wondering whether I’d ever get back down to England to give it a shot. That was pretty good.

‘Another great moment was the Scottish Cup semi-final when Falkirk beat Hibernian 1-0 in April 2015. Then going out at Hampden Park for the Scottish Cup final with all the fireworks going off, the massive 3-D writing on the pitch and the stadium almost full was a big highlight, too.

“I’ve never had the privilege of playing at Wembley, but Hampden is the Scottish Wembley. The changing rooms are unbelievable and when you come out on to the pitch, you think you’ve made it in a way.

“We almost won the final as well, which would have been the highlight of my career (Falkirk lost 2-1 to Inverness Caledonian Thistle). We were beaten in the last minute, but I’ll never forget it.

The semi-final was amazing as well because we were underdogs and it was my best mate in football, Craig Sibbald, who scored the winner. He plays for Livingston now. Craig scored with a header and then we hung on, which was up there with my best feelings because I was really struggling with an injury. I got smashed early on in the game.”

Jonjo Shelvey. Rotherham played against Newcastle United at St James Park in the Championship in 2015-16. I was tasked with literally following him around the pitch wherever he went. It didn’t matter where the ball was, I was following him around and he became extremely frustrated.

“I quite enjoyed it, but with the ability he has, he took a free-kick just before half-time, played an 80-yard pass and Newcastle scored from it. That was the only time that I gave him 10 yards because it was a free-kick. I couldn’t really do anything about it.

“The way he plays, he is someone you should look up to. He is composed and confident in his own ability, probably arrogant, but that’s what makes him so good. I admired him because he was getting wound up with me but he still tried to get the ball and then eventually his quality showed.

“My task was just to wind him up and try and put him off his game. It was going quite well but they beat us 4-0 in the end. He was saying all game ‘I’ll give you my top after the game’ then he came down the tunnel, we had a little laugh about it and he did give me his top.’

I had some horrible ones when I was at Falkirk. I’ll say Dumbarton away, or Alloa. No, Dumbarton because there is only one stand the fans can sit in and the rest of the ground has a corrugated iron fence around it. It was always blowing a gale there. It’s called Dumbarton Rock because there’s a massive mountain right by it. I’d like to see a few of the English boys go up there to play and try and make it and then say the Scottish leagues are easy, because they’re not.

Cowdenbeath away was one of my first games sat on the bench. It has tyres and a stock car track around the pitch. And the dressing room is like a little shoe box. You can’t even get the subs in it.

“I thought ‘What on earth have I done here?’ I thought I was coming up to full-time football and it was 10 times worse than the part-time pitches in England. But I wouldn’t change anything. I played there a few times in the end and enjoyed it.

“But then contrast with Ibrox, or Hibs’ ground or Hearts. There were some really unbelievable places as well. Ibrox is still the best ground I’ve played at, the loudest place I’ve ever played at – 55,000 fans and they don’t stop the whole time. Scottish fans are incredibly passionate.

Alan Shearer, no doubt. He was the one. I was a Newcastle United fan growing up and had his name on every top. I used to peel off doing his celebration in the garden with my brother.

My dad’s from around Newcastle and he brought me up supporting them.”