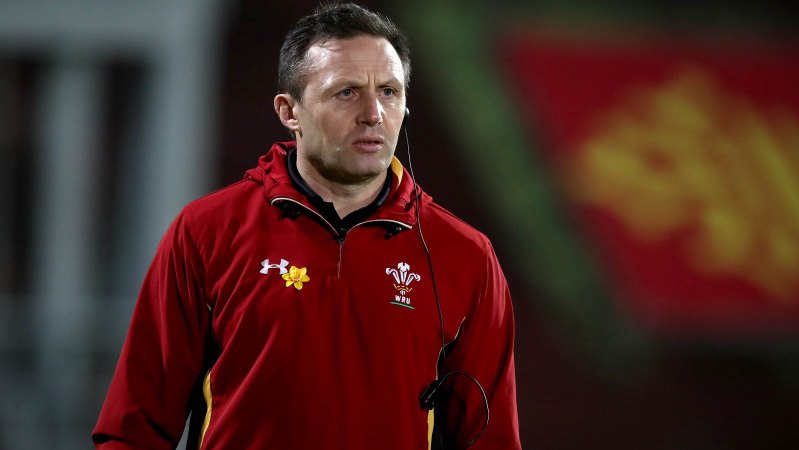 When he was Wales U20 coach, Jason Strange seemed to be a man in hot demand after leading his age-group team to a Grand Slam in 2020. He was also at Cardiff Blues, but lasted just one season under former coach John Mulvihill. Now, a Grand Final winner with St. Helens, he tells Steffan Thomas he feels glad to have left Welsh rugby behind.

Jason Strange has revealed how he turned down offers to return to rugby union to stay in league and insists the codes are poles apart.

Strange left his role as Cardiff attack coach in 2019, just one year after taking the job, but admits it was a relief to depart Welsh rugby.

The former Newport, Bristol, and Leeds outside-half has since landed on his feet and is now loving life as St Helens’ kicking coach in Super League.

“To be honest, I was pleased to be leaving in the end,” says the 47-year-old, who works for the three-time Grand Final winners in the 13-man code.

“From a rugby perspective I think we improved the Blues, and attack was the strongest part of our game.

“I’ve been involved in Welsh rugby all my life and sometimes you’ve just got to smile at the politics, because there’ll always be politics in Welsh rugby, but you brush yourself down and move on.

“I understand the game. I’ve been there long enough as a player and a coach.

“Sometimes you’ve just got to smile because there’s always different agendas going on in Welsh rugby, but it’s worked out perfectly for me. I wasn’t disappointed to be leaving.

“At the moment I’m enjoying coaching in rugby league too much. I’ve had opportunities to go back to rugby union but I’m in no rush at the moment.”

After parting ways with Cardiff, Strange had a number of opportunities to remain in rugby union, but the former Wales Under 20 coach has always been someone who likes to put himself outside the comfort zone.

And as soon as the offer came in to join the coaching staff of one of the biggest clubs in rugby league, Strange jumped at the chance.

“It’s worked out perfectly for me,” says the former outside-half, who played for Ebbw Vale, Newport, Bristol and Leeds,

“I took a bit of a gamble leaving union, but I’ve been up there three seasons now. After departing Cardiff, the easy thing would have been to take the first job offer in rugby union, but I wanted to try and get outside my comfort zone, get some new ideas and try rugby league.

“I’ve always admired the sport. I’ve coached rugby league previously at Wales under 16s and under 18s level, so I had a good insight into it.

“This opportunity came up with St Helens. I can’t speak highly enough of the club and both the head coaches I spoke to have been fantastic.

“I’ve been fortunate to join such a successful club with a winning culture. I think that’s really helped as well.

“Basically, I look after the kicking side of the game. That’s my main area.”

This will be very interesting, the U20’s have played some sensational rugby under Strange.

Many players have successfully made the switch from league to union with names such as Sonny Bill Williams, Jason Robinson, and Matt Rodgers springing to mind.

But Strange believes the differences between both codes are as vast as they’ve ever been, and he insists should he ever return to union his stint in league will have improved him as a coach.

“What I’ve come to understand is that both codes are probably as far apart now as they’ve ever been, tactically,” he says.

“One of the reasons for that at the moment our ball in play time is 68-70 minutes, so obviously the way you train has to look like that sport. Whereas, in rugby union, if you were playing, it’s around 35-40 minutes a game.

“I almost compare them now to cricket and baseball; they are that different.

“My fear is there is definite parts of league which transfers over to union, but I think we have to be careful, particularly from a union perspective, we’ve become too obsessed from learning and taking ideas from rugby league.

“We’ve lost our identity as a sport because of it. I think we’ve gone a little bit too far with that and become too structured because rugby league is a really structured game and the main reason for that is because if you put the ball on the floor in rugby league, you’re almost guaranteed to keep the ball.

“In union, that’s where the contest starts. My point is I think we’ve got to be careful we don’t forget about what the fundamentals of rugby union are.

“The fundamentals to me are about the continuity of the game, whereas rugby league is more about structure and yardage.”

Strange has been fortunate to work with some of league’s top players, including Jonny Lomax, Alex Walmsley, and Mark Percival, but he has been particularly impressed by his fellow Welshman, Regan Grace.

“I love working with Regan Grace. I was fortunate to coach Regan at Wales under 16s when I was teaching after I’d finished playing.

“Regan is someone who is massively appreciated at St Helen’s. He’s really highly thought of.

“He’s made a real great career for himself. It’s probably the one position that you can easily transfer from union to league.

“Wing would give him the best advantage because one thing Regan’s got is the ability to score tries which is an attribute that works in every sport. He’s got out and out speed.”