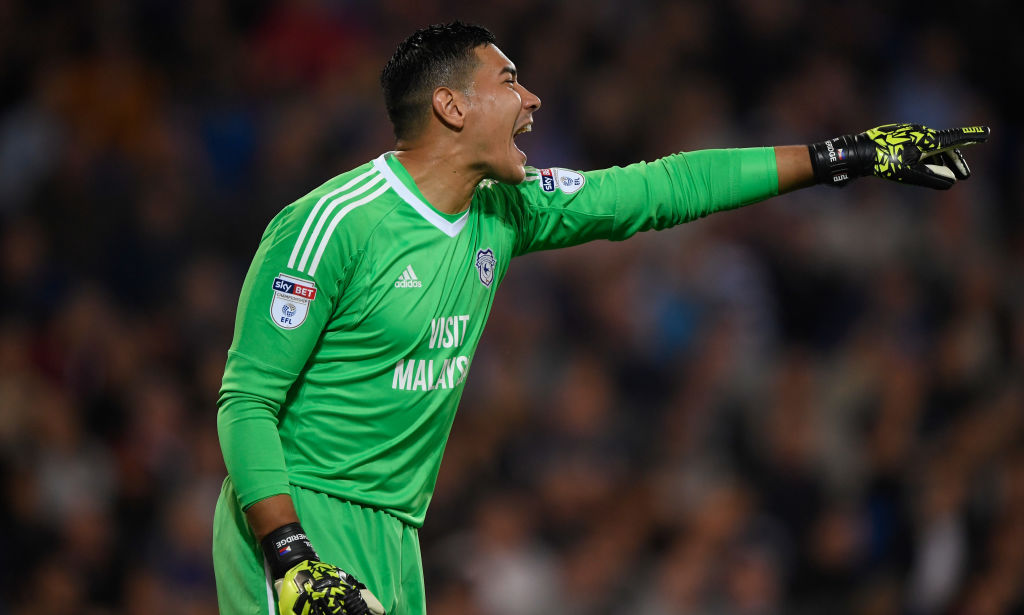 Neil Etheridge left out of derby clash amid speculation over his future. Pic: Getty Images.

Neil Warnock has admitted Cardiff City will have to cash in on big money offers for their players should relegation be confirmed on Saturday.

Anything less than a victory at home to Crystal Palace – or a shock victory by Brighton at Arsenal on Sunday – would condemn Cardiff to an immediate return to the Championship after one season in the top flight.

They would be the first club to go back down straight away after promotion on two occasions – the first being after the 2013-14 season.

Warnock has insisted he will stay at the helm to try and deliver another immediate return – and insists the Bluebirds can still escape with victories over Palace and then at Manchester United on the final day of the campaign.

But he is also realistic enough to know that the likes of goalkeeper Neil Etheridge, Josh Murphy and even Nathaniel Mendez-Laing could become targets for others, while loanee Victor Camarasa has plenty of admirers.

Warnock was half joking when he said: “One of the lads – I don’t know if they were joking – said, ‘we’re going to get a £20m offer for Etheridge, gaffer! What would you do?’

“Neil was sat there and I said, ‘I’d put him in my car, drive him there, and not let him out until he’d signed.

“There are bound to be clubs circling, but the question is whether any of our players would get in their teams? Victor (Camarasa) maybe, but he probably had his worst game at Fulham.

“As far as the others are concerned, then any good offers for our players would have to be considered.”

If Cardiff did manage to pull off a miraculous escape then incoming players would be the order of the day – and the summer – if they were preparing for another season in the Premier League.

There will be no defiance of logic and expectation at Old Trafford, however, unless Warnock’s side can win at home to Palace.

The visitors are not among the top six that Cardiff have struggled to live with this season, but they can boast four victories in their last five away games and have picked up more points away from home in 2019 than any other team in the Premier League apart from Manchester City.

For Warnock it will require putting the breaks on Wilfried Zaha, the striker he took to Palace when he was manager after Zaha’s disastrous spell at Manchester United.

He added: “If we don’t win this game against Palace, we can forget it. We have to win this game, but we are up against a side that play some of the best football in the Premier League away from home.

“I love the Palace fans. They were really good to me when I was there.

“We re-signed Wilfried. I thought it was important at the time and he’s gone on to do really well.

“I know Cardiff were a bit disappointed with him when they had him here, but Manchester United had let him down badly – talking to the lad when I signed him. Now, he’ll probably go on to a top club in the new few years.

“Saha wasn’t in a good place when he came back from Manchester United. I met him in the chairman’s office and I had half an hour with him. It was obvious he felt let down by Manchester United and when I spoke to him I could understand why he felt that.

“He was only a young lad and he needed help – an arm around the shoulder. But it didn’t appear he got any of that.

“But that’s what you do. You go away and rekindle that enthusiasm. He’s always had tremendous skill and now he’s showing people his worth. He will end up at one of the top clubs in Europe.

“He’ll be the best player on the pitch on Saturday. Everyone knows that when Wilfried gets the ball, he’s dangerous.

“We have got to hope we can cope with that and that our forwards can create chances.

“They have a strong side at the back and they are very solid in midfield. Wilfried and whoever plays up front with him, have that ability to break really quickly and punish you.

“It’s an ideal scenario, really. They have beaten Arsenal and Manchester City away from home, so that puts this game into perspective against us.”

Warnock has paid tribute to the work done by former England manager Roy Hodgson who saved Palace from relegation after taking over in the hot-seat last season.

“Roy had steadied the ship,” said Warnock. “They were in a bit of a mess and he’s brought some traditional standards back to the club.

“They have never really been threatened by relegation, with the squad they have. I think they have so many decent players in that squad, they are probably disappointed not to be higher.

“I would put them on the same level as Wolves and West Ham, when I look at the squad they have got.”