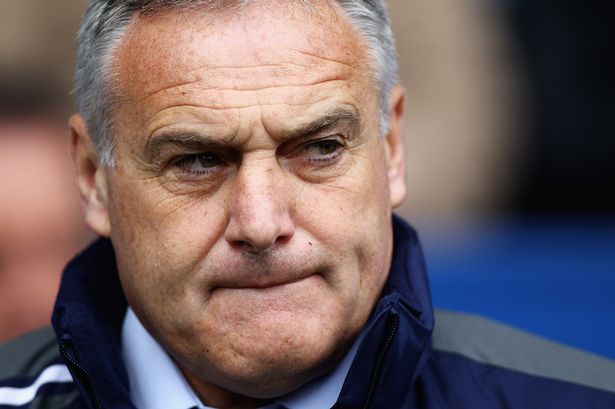 Former Bluebirds Dave Jones and Paul Wilkinson are set to join forces again – and take on arguably the toughest job in British football.

Jones was Cardiff City manager for six years, while ‘Wilko’ was a club coach under Lennie Lawrence and stayed with the club.

Now Wilkinson has been appointed manager of League One Bury, a club battling against the odds. Jones is poised to join the Shakers in an executive role to help out.

They worked together at Cardiff City and Sheffield Wednesday.

Cash-strapped Bury start the season with a 12-points deduction after agreeing a rescue plan, although the club have appealed against that decision, and they have scarcely any players.

When they played a friendly against Nantwich nine days ago, every one of the 22 squad players on the team sheet was ‘Trialist’.

“Bury is a club with a great history,” said Wilkinson. “I’m determined to drive the club forward.

⚪️🔵📹 FREEVIEW: The Gaffer’s first interview as Bury boss is now free to view on iFollow!

“It’s been a whirlwind. I’m a football person looking forward to new season. Football has always been my life and Bury gave me the opportunity to be a manager.

“With the size of Bury and the club’s history it was always an attractive proposition.”

The match against Nantwich ended in a 1-1 draw, while angry Bury fans staged a demonstration against owner Steve Dale.

Wilkinson’s Bury now play Championship club Blackburn Rovers at Gigg Lane in their second pre-season fixture on Wednesday, while their opening League One fixture is at home to MK Dons on Saturday, August 3. Former Cardiff City striker Rhys Healey and ex-Newport County defender are in the Dons’ squad.

Wilkinson’s appointment earlier this month was a massive surprise, but he has been joined at Gigg Lane by former Cardiff manager Dave Jones, hired by Dale to rebuild football operations at the club.

Of all 92 Football League managers, Wilkinson is facing by far the toughest challenge during the season.

Wilkinson has almost two decades of football coaching experience, but now he is starting a career in professional football management and needs to move quickly in terms of recruitment.

Ryan Lowe was the manager who led Bury to promotion last season, but he left for Plymouth and now the Shakers are favourites to be relegated.

Under-fire chairman Dale staved off the threat of liquidation last Thursday, having bought the club for £1 from Stewart Day in December.

Dale says Bury were £8million in debt, but under a Company Voluntary Arrangement, they will pay unsecured creditors 25p in the pound, while football creditors will be paid in full.

Wilkinson, aged 54, had signed a two-year contract to be Truro City manager in Cornwall, but two weeks later accepted the offer to take charge at Bury.

He played more than 650 games as a forward for Everton, Nottingham Forest, Watford, Middlesbrough and Barnsley. He also won four England Under-21 caps.

His first job in coaching came working with the youth team at Leeds and he has since had two spells in caretaker charge in the English Football League, with Northampton and Grimsby.

Lincolnshire-born Wilkinson played under Lawrence for Middlesbrough, helping the Teesiders earn promotion to the Premier League, while he was Watford top scorer for three successive seasons.

Brian Clough for the Forest manager who signed Wilkinson from Everton in. 1987 and his first words to his new player were: “Get your hair cut – NOW.”

Now ‘Wilko’ will be barking orders of his own on the training ground.