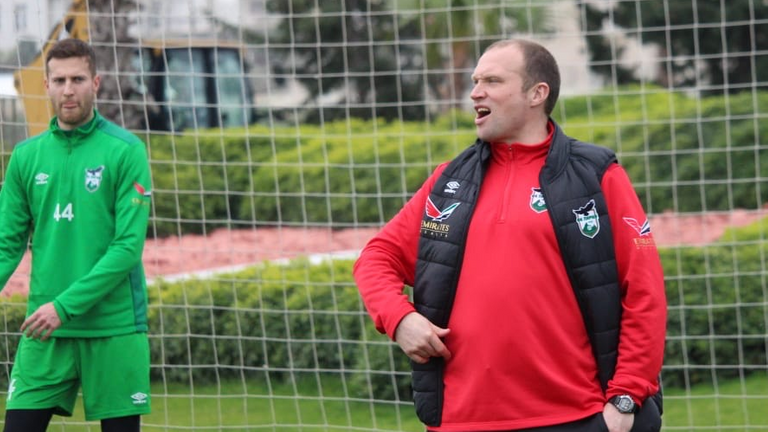 Warren Feeney is coach at Pirin Blagoevgrad in Bulgaria.

Former Cardiff City and Swansea City winger – and ex-manager of Newport County – Warren Feeney has revealed he is locked down in Bulgaria and away from his family.

Feeney – who is currently manager of Bulgarian second division side Pirin Blagoevgrad – stayed in his job when the chance to leave was still open last month.

So, while his wife and children are in the UK, Feeney has been helping his local community and trying to ensure players stay fit and healthy.

“It’s been difficult, I’m not going to lie,” he told Sky Sports News.

“I thought about going home but there was a possibility of being quarantined for two weeks so I wouldn’t see my family anyway. I think looking at the bigger picture it’s a wise decision to stay.”

As with elsewhere in Europe, the coronavirus pandemic has brought Bulgarian football to a standstill, with no scheduled date for a resumption.

The 39-year-old Northern Irishman, who was Newport manager from 2015 to 2016, is still taking charge of training but has to deal with players who are separated into pairs.

“You can see how much fitness they lose. I’m sure it’s the same with other players at the top level. We try to keep them occupied.

“The club has been very good. They own some restaurants so all the boys are getting fed at the moment. We go and pick up the food [because of isolation]. They look after us.”

Pirin Blagoevgrad were 12th in the table when their season was put on hold and the former Northern Ireland international admits he is unable to do any planning for next season.

“I’m speaking to agents and clubs and no one knows what’s going on so you can’t really plan because if the season does get extended are players contracts going to get extended?” he says.

“It’s a difficult one. FIFA and UEFA are doing all they can but we’ve got to address it day by day and that’s what we’re prepared for.

“If the football season has to finish it has to finish, but it’s only a sport in a population of billions. It is a crisis.”

Feeney spent three seasons at Cardiff between 2007 and 2010 but was loaned out to a number of clubs, including Swansea in 2007.