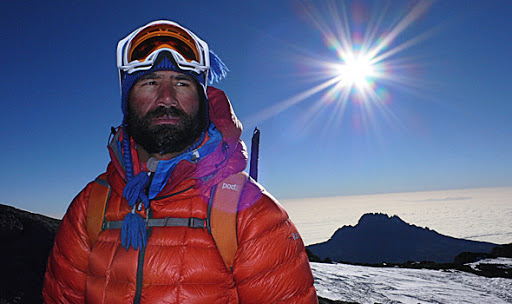 Former Welsh rugby international and adventurer Richard Parks is used to challenging the norm and battling stereotypes and tonight (Tuesday, 27 October – 8.00pm on ITV Wales) his latest project will be aired.

‘Richard Parks: Can I Be Welsh And Black?’ is a programme that coincides with the final week of Black History Month. It is a powerful, personal and at times poignant look at what it means to be Welsh and Black in today’s Wales.

The documentary is a story of national pride and belonging in which Parks courageously shares his experiences and vulnerabilities as a successful black man and recent father who has flown the Welsh flag his whole life.

“As a passion project, it has been an emotional journey. I’ve felt a heavy weight to produce something robust and balanced that people of colour can see themselves reflected in, whilst engaging a largely white audience into this conversation,” said Parks.

“I’m proud of what we made together. It doesn’t pull any shots, but it’s proudly Welsh.

“Since becoming a dad to Fred in recent years, I’ve been reflecting on my life, career and experience.

“This has been accelerated by the forced introspection during lockdown and the global ‘Black Lives Matter’ movement.

“As a father, I hope that my son doesn’t bear the conflicted identity of being a mixed heritage Welshman, like his dad. Not white enough, not black enough and not Welsh enough for some.

“I’m not suggesting that Wales is more racist than anywhere else, but racism in Wales definitely exists and needs addressing. And you can’t fix anything without fully understanding the problem.

“I talked to a variety of brilliant black and mixed race Welsh people to try to better understand our place in Wales’ past, present and future.”

Parks is of Welsh and British Jamaican heritage and, like many mixed-race and black children, he didn’t always see role models who reflected him.

In the programme he talks with one of Wales’ most iconic mixed-race sporting heroes, Ryan Giggs.

The Wales football team manager gives an insight into his childhood in Cardiff and the passion within the national football team to stand up to racism.

“I’d define myself as mixed race – my mum’s white, my dad’s black; it’s as simple as that. I’ve never really shouted about either. It’s just who I am,” said Giggs.

“I loved visiting relatives living in Cardiff’s dockland community.  I mean, there used to be a carnival every year down the docks and I used to love going to that, but it was just normal for me. It was just normal.

“So it was great for me to have that diversity.”

Giggs talks about his decision to take the knee at the first post-lockdown round of international matches with Wales earlier this year.

“The squad were determined to make sure that we took the knee and we made sure that we were representing our country and telling everyone that, you know, we don’t put up with discrimination or racism,” he added.

Like Parks, Hewitt plays for the Dragons and has spoken out on the topic of racial abuse. In doing so he has become a beacon of anti-racism and education on social media.

“Somebody sent me a video of a black man getting burnt alive. And there’s probably some, you know,  12, 13, 14 year old, on their phone, looking through Twitter and that’s come up and they’re thinking that, you know, that’s what people think of them in this country,” explains Hewitt in the programme.

“To think that, you know, the colour of your skin is just dictating whether you’re Welsh or not in some people’s minds is just unbelievable and it’s sad.”

As well as playing for the Dragons, Newport, Pontypridd, Celtic Warriors, Leeds and Perpignan as a rampaging flanker, Parks also won four caps for Wales.

Since retiring he has become an iconic adventurer who holds numerous records from his expeditions to Antarctica. Parks has never been daunted by any challenge in his life.

He has always faced up to adversity and met it head on, whether on the rugby field or tackling the highest mountains in the world or the bleakest and most hostile environments at the North and South Poles.

But he admits in the hour long special that he is “taking on the most daunting journey of my life. I’m staying here in Wales and asking a very simple question.

“The title of the show is ‘Can I be Welsh and Black’ and the answer to that was always ‘yes’ and it still is.

“I just hope the Wales my son Fred, and indeed all our children, grow up in is one where their Welshness isn’t questioned because of the colour of their skin.”

Richard Parks: Can I Be Welsh And Black?