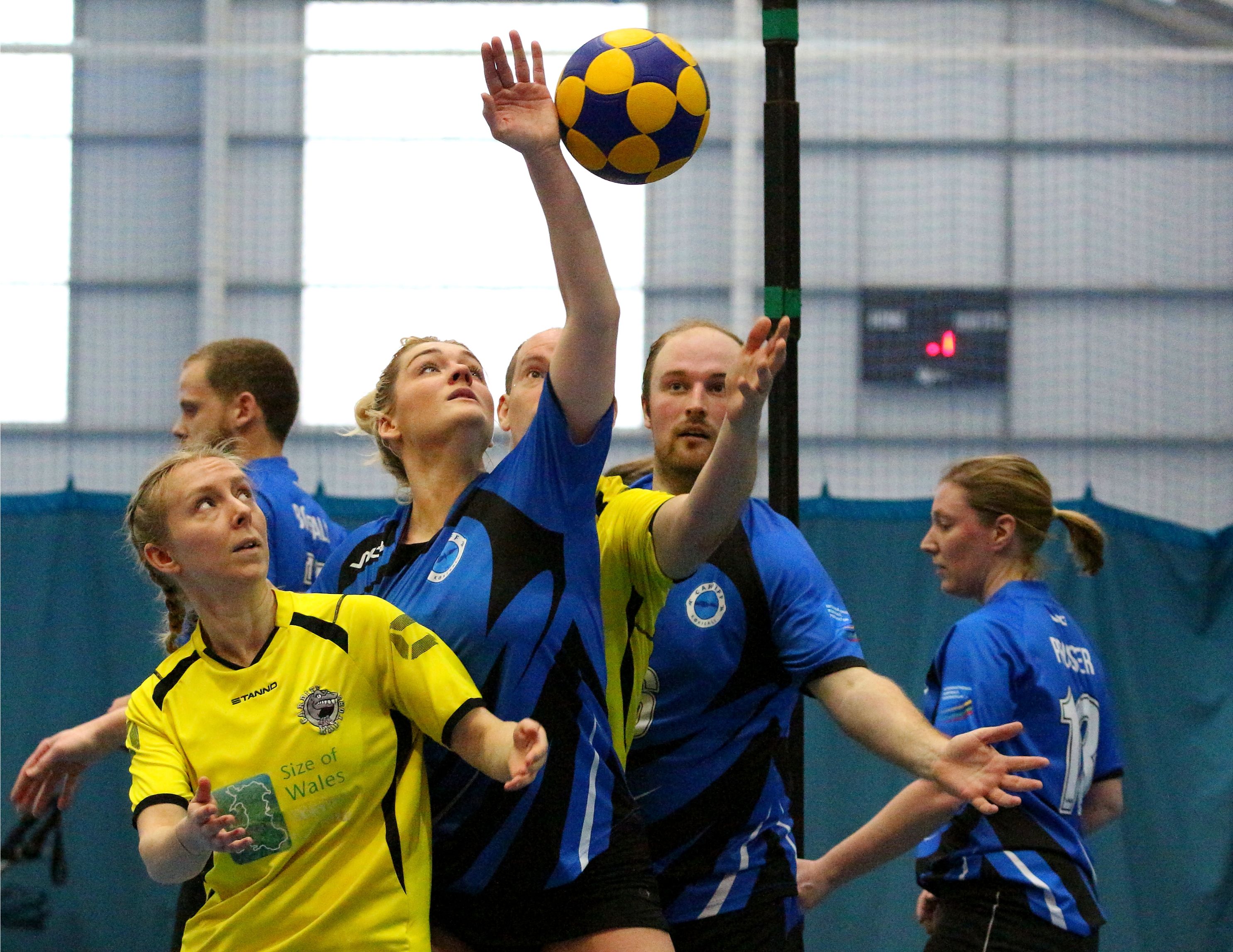 The South Wales football derby between Cardiff and Swansea wasn’t the only local sporting skirmish taking place in Leckwith at the weekend. Little more than a long throw away from the Cardiff City Stadium, two of Wales’ top korfball teams – Cardiff City & Met and Cardiff Raptors – were doing battle at the House of Sport, as Owen Morgan reports.

Not familiar with korfball? Don’t worry, you’re probably not alone. But what the sport currently lacks in familiarity in this country, it certainly makes up for in action and entertainment.

Saturday afternoon’s derby match at the House of Sport was played with all the enthusiasm, passion and rivalry displayed across the road the following day at the Cardiff City Stadium . . . and it had goals!

The most basic explanation of the sport is a cross between basketball and netball.

That overly simplistic description doesn’t do justice to a fast-moving and skilful sport where teamwork is key.

But the biggest difference between Korfball and most sports is the fact it is a mixed sport where male and female team members compete on a totally equal footing.

Korfball is played by teams of eight – four men and four women. Other than being in attack and defence “divisions”, there are no fixed positions or roles.

The game requires all-round skills and team play because after two goals, scored by either team, defenders become attackers and attackers become defenders.

Although playing numbers in Wales are currently relative low – around 150 to 200 active senior players – the team ethos and mixed gender aspect of the sport is proving popular.

Welsh Korfball chairman James Wilcox says the sport is expanding here: “We’ve got a good number of teams taking part in the leagues, the most that we’ve ever had so we’ve got a nice upward trajectory going and we’ve also now got teams in Swansea, Newport and Aberystwyth.

“So, whereas the sport used to be confined to Cardiff for maybe 20-odd years, there are now teams popping up in other parts of Wales, which is good.

“That’s what happened with Newport. It was one guy who was part of Welsh korfball and another person who was involved in setting up clubs in Cardiff and they both went to the effort of setting up another club in Newport and that’s going well at the moment in their first season.

“That’s a model we’re looking at to take forward and target some areas north of Cardiff, in the valleys, perhaps.”

Wilcox says the sport’s growing popularity is down to its accessibility, both as a sport where men and women can play side-by-side and its relative ease to pick up.

“I think the fact that the sport is mixed is a big part of it,” he says. “But I think on the flip side as well, it’s such a lesser known sport that no-one’s got any preconceptions going into it.

“What we tend to find is that everyone who comes along will inevitably never have heard of it before or tried it, so everyone who joins is starting on a level playing field.

“If you go along to a club there will be other new people there and even the people who aren’t new will have only heard of it, generally, a few years before.

“I would say it’s not as intimidating a sport to pick up brand new as an adult where others might be. Imagine going to join a team full of people who might have been playing their whole lives, whereas with korfball, there are lots of teams that cater for complete beginners.

“I think that’s definitely something that people find attractive when they come and try the sport. It’s very welcoming to beginners.”

Although not currently played in large numbers within Britain, korfball isn’t a new sport. It was demonstrated at the 1920 Olympic Games in Antwerp.

The sport has since grown dramatically and is now played in over 60 countries worldwide, with European and World Championships held every four years. Wales has a national senior squad and a development squad.

The main aim is to get a football-sized ball into a plastic basket 3.5m above the ground.

So, is it just a cross between basketball and netball?

“That’s the simple way of explaining it,” says Wilcox. “But it’s not a cross between those sports. That’s not how it was actually developed. It does have similarities to both but differences as well.

“So, for example, footwork. You don’t dribble with the ball, so that may be more similar to netball, but at the same time, you can’t shoot when players are defending you, so you have to shoot on the move.

“Even though the footwork is similar to netball, you don’t see people playing it in the same way, you see them trying to move more.”

But having been good at netball, or basketball isn’t a pre-requisite for being good at korfball, which gets its name from the Dutch word for net.

Wilcox says: “We get a lot of people who have played a lot of different sports before and generally, any kind of sporting skill is going to stand you in good stead to pick it up.

“If anything, sometimes you have more difficulty with the netballers and the basketballers because you have to tweak their specific skillset, whereas someone who is just an athlete is easier to mould as a korfballer.

“The instinctive things are quite hard to get out of people. Netballers, for example, trying to get them not to stop as soon as they catch the ball is one of the hardest things, because if they do that, they find it very difficult to find the space to shoot.

“One of the great things, I think, about the rules is that with the defending rule, if you are being marked you can’t shoot, it stops the sport being quite so advantageous to tall players.

This means korfball is very much a team sport, where passing and team-work outweighs sheer individual skill.

Wilcox says: You’ll still have leading goalscorers, but you can’t just be an attacker or a defender in korfball, you have to do both.

“You can’t just get the ball and score on your own because you have to pass with your team to get free. The footwork is limited enough so that you can’t be like a footballer who gets the ball and runs the length of the pitch to score. You have to use your team mates and that is how the sport was designed.

“Originally it was created by a schoolteacher for all his kids to play – males and females and it was designed to be cooperative so people had to work together. That is one of the core values of the sport.”

The league structure in Wales sees Welsh clubs playing against each other, as well as teams from England and potentially clubs from across Europe if they are successful domestically.

This means players who display a talent for the game can quickly move up though the ranks to gain international honours.

Wilcox says: “We’ve got players in the current Welsh squad who have picked the sport up in the summer, they’ve decided it’s something they like and they’ve gone straight into the national team, so there are opportunities to play at a higher level if they want to.

“We’ve got club teams that go all around Europe playing in the Europa Cup – Slovakia, Turkey, France – so it’s interesting having that high level aspect to it as well.”

League matches are played indoors between September and April, but there are also outdoor summer leagues which are played on a more social basis.

The sport is also played at university level here, while Welsh Korfball is also looking to attract younger players by introducing the game to schools.

Wilcox says: “In Wales, it’s not something that’s really taken off yet but we do have coaches going into schools particularly in Cardiff, so there will be kids in Cardiff who have played it.

“There are some teachers who run it in the schools in Cardiff mainly, but I think there is one in Caerphilly. They do a block of sessions and there are junior tournaments they take part in. It’s all quite low key within Wales at the moment, but that’s an area we have got room to grow into.”

The sport is also ideal for families who are looking for a sport where everyone can take part, irrespective of age or gender.

And the winner of the #ECUP2020 Final is… @Fortuna_Delft!! Congratulations!

Wilcox says: “People tend to say there is nice family spirit to it. A lot of people meet their partners through the sport and then they have kids and the kids can play together in the same team.

“Whether they are male or female, they can play with their parents, so it’s quite a family-orientated sport.

“There are families who play together on the same team and that’s one of the major advantages of it, but even at university level, the atmosphere where you’ve got men and women playing together, it does a lot for respect between the genders.

“There was a good quote from the Dutch coach, recently -they are always the leading nation, that’s where the sport comes from – and he said something along the lines of ‘you can always tell a korfball player from their emotional intelligence which they get from playing in a mixed gender sport’.”

One thought on “Four Men, Four Women, And Some Familiar Skills . . . Say Hello To Korfball”