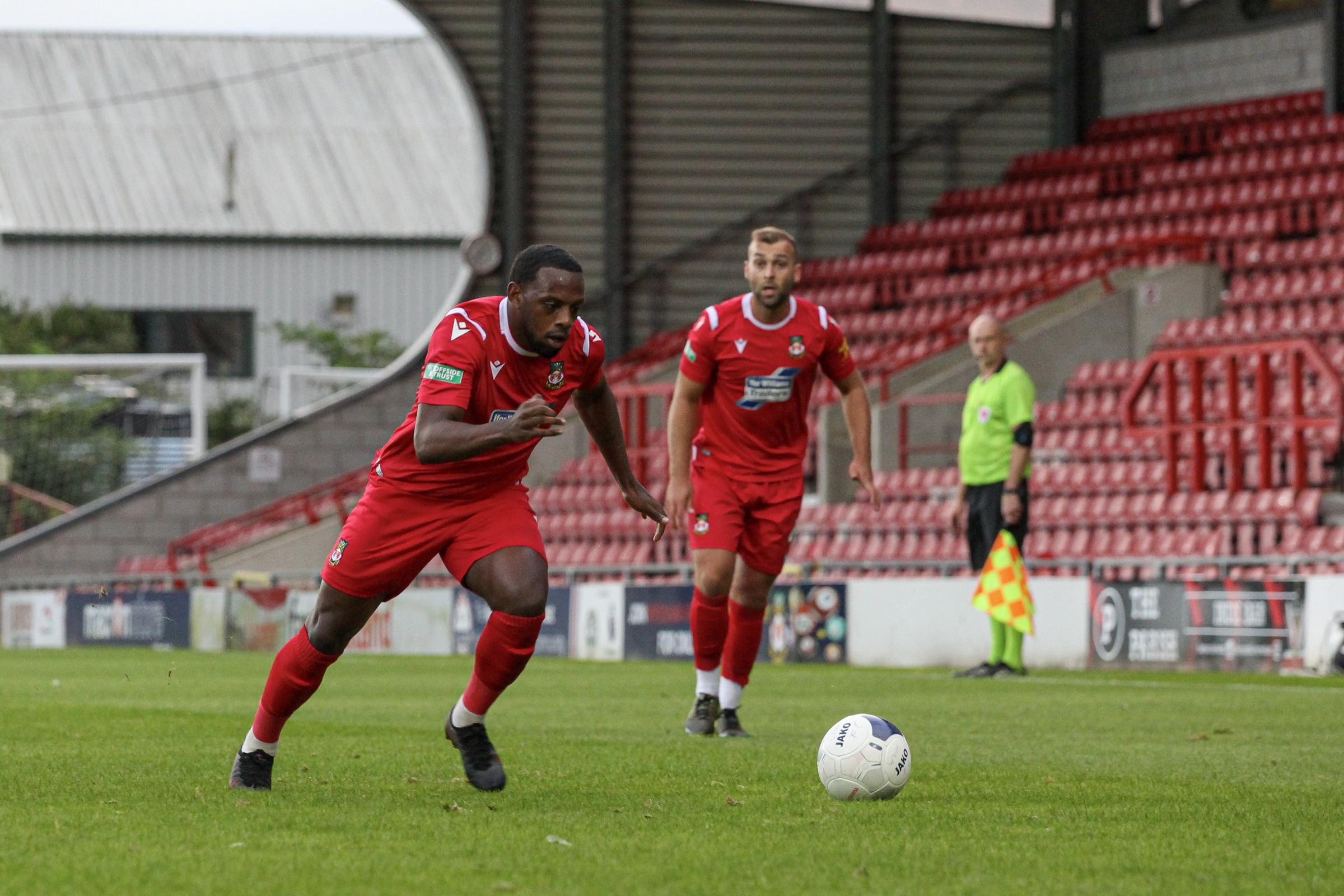 Pace ace Anthony Jeffrey believes he has the football magic to help Wrexham fire up a promotion challenge in the Vanarama National League.

Golden Jaguar Jeffrey has become a Dragon – and is intent on playing League Two football in 2021-22.

‘AJ’ was born in London and started his professional career with Arsenal, but he is still intent on making a major breakthrough at Football League level.

The speedy winger/striker is a full international for Guyana – nicknamed the Golden Jaguars – and helped them quality for the Concacaf Gold Cup finals for the first time.

Now, Jeffrey, who celebrated his 26th birthday last month, is in North Wales and intent on making a major impact for Wrexham, saying: “I will bring the magic. It will come.

“I like to try and make things happen, work hard and maintain space.

“My aim is to keep working. Goals and assists will come.”

One of the greatest honours of my life and my career playing in the @GoldCup watched by my family and millions around the world …#GodisGreatest 🇬🇾🙏🏾✅ pic.twitter.com/O2zV8IlZJ8

“The gaffer (Dean Keates) has us well drilled and no teams like playing against Wrexham,” says Jeffrey. “I am close to a lot of people at National League level and everybody tells me we should be challenging this season.”

Wrexham are in mid-table after six National League matches, having won three and drawn one. Their latest result was a goalless draw against Barnet, while last weekend’s fixture against Sutton United was postponed.

The next League test for Wrexham is against Weymouth away on Saturday, November 14 followed by Hartlepool away and then Aldershot at home.

But manager Keates and his team are without a win in four league and cup matches and they failed to score in three of those, including a goalless draw against Barnet.

“That was a frustrating match,” said Jeffrey, who played the full 90 minutes against Barnet is now regaining match fitness after suffering an injury during a 1-0 win at Yeovil.

“That should have been our win, 100 per cent. We were the better team, but lacked the magic to earn the win.

“I’ve watched every match this season and we’ve been unlucky. If we can cut out silly mistakes and keep working hard for each other we’ll be fine. We are all close mates.”

The Dragons are without a match this weekend, having lost 4-0 against Solihull Moors in the FA Cup, and Keates’ men are focused on that trip to Weymouth on Saturday week.

Hendon-born Jeffrey, started his playing career in the Arsenal academy when he was eight-years-old and stayed more than a decade before moving on to Wycombe Wanderers, Boreham Wood, Forest Green Rovers, Sutton United and Dover Athletic.

He has moved to North Wales from London and is confident he can make a big impact with Wrexham this season.

Jeffrey helped Guyana qualify for the 2019 Concacaf Gold Cup, playing in a 2-1 home win against Belize in front of 4,000 spectators at the Synthetic Track and Field Facility, Leonora.

That victory ensured Guyana qualified for the Concacaf Gold Cup finals in America, a massive moment for the Caribbean country which sparked manager Michael Johnson to issue an edict.

The former Birmingham City and Derby County defender threatened to fine any player who arrived home from the post-match celebrations too early!

“It was amazing, the best experience of my footballing career so far,” said ‘AJ’. “Making my debut, just being out there, getting a win for your country. No bigger honour really.

“We were labelled the greatest team ever in Guyana, we’re the most successful team ever. It was massive. Both my parents and grandparents are from Guyana. That brings huge pride.

“There were tears from all of us. I’ve never cried for joy in my life. It was a special emotion.

“The manager said he would fine any player who arrived back before 6am. It was a good night, the whole country stopped. Amazing. We felt like movie stars.

“Guyana was a country run by cricket, but we made a massive statement to get to the Gold Cup.”

Jeffrey signed for Wrexham after spending almost three years with Dover in Kent and he says: “They are one of the biggest teams in Wales and that means many more people will find out about Guyana.

“That has me smiling with pride.

“My goals are to stay healthy, be consistent and help our club earn promotion. Playing for such a big club, I now need to reach my full potential and I’m ready for the challenge.”

Now Jeffrey is focused on helping Wrexham regain a place in the Football League and believes that is possible this season, saying: “I know I can play in League Two or better.

“My time will come when I play at that level. I’ve already played in the league and it’s important to get back.”

While ‘AJ’ and the Dragons aim high, Hollywood actors Ryan Reynolds and Rob McElhenney are continuing talks to take control of club.

Reynolds and McElhenney have offered to invest £2m in the club if the takeover is given the go-ahead. Wrexham Supporters Trust hold a virtual meeting on Sunday when the two men will give a presentation and outline their vision for the future.

There was talk that Russell Crowe could be involved because of his links to Wrexham, where his grandfather John ran a fruit and veg business.

Hollywood star Crowe can trace his family back to great grandparents Fred and Kezia, who emigrated from Wrexham to Calgary in Canada in 1925 with 12 of their 13 children.

It was John, then aged 18, who decided to stay behind and run the family fruit and veg business in the centre of the town.