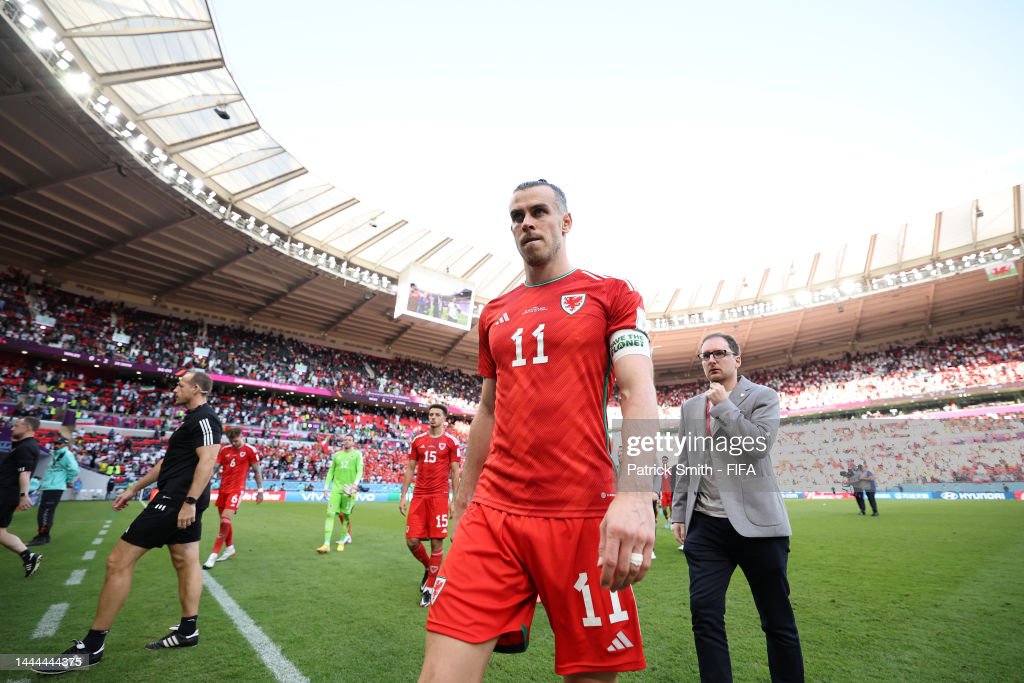 Gareth Bale leaves the field after Wales' 2-0 defeat to Iran.

It must have felt a long way from Tylorstown as Robert Page starred out towards the world’s media and tried to explain how the heady optimism of just 16 ago had evaporated under a hot Arabian sun.

Little more than two weeks ago, the Wales manager was in his home village, announcing the squad he would take to take to a World Cup finals, the first Wales manager to do so for 64 years.

Now, that adventure already seems to drawing to a close after just two games following a 2-0 to Iran which was unexpected, but felt feasible from the moment Kieffer Moore missed an early opportunity.

Page admitted his team had fallen well below the standards they set for themselves as defeat to Iran put them on the brink of World Cup elimination.

He refused to use Wayne Hennessey’s red card – only the third for a goalkeeper in World Cup finals history – as an excuse for the defeat, and said Carlos Queiroz’s team were well worth their win.

Iran hit both posts and had a goal disallowed before they finally took the lead in the 98th minute through substitute Roozbeh Cheshmi’s long-range strike, with Ramin Rezaeian adding a breakaway second three minutes later.

There is no way Page carries on as manager of Wales beyond this World Cup. Tactically out of his depth in both games & picking players based on vibes & not form says it all.

Gareth Bale and Aaron Ramsey, so often the architects of Wales’ successes down the years, were both disappointing and they now need a victory over England next Tuesday to have any hope of reaching the knockout stages.

Page even appeared to refer to the England game as Wales’ “final” match of the tournament, underlining how difficult the road ahead is for the Dragons from here.

“This is a hard one to take,” Page said. “I’ve said to them before every game: ‘Go and show the world what you show us every day,’ and that is not a true reflection of that team.

“They got their true rewards today, they deserved that defeat. We fell well below the standards that got us to the World Cup, if we’d met those standards we’d have been alright. And if you do that in top competitions, you get punished.”

Asked about the England game, Page said: “We want to finish the competition on a high. It’s out of our hands for going through, but we want to finish with a good performance and a win. We’re low at the moment, but we’ll get them back up tomorrow for a tough game to finish with.”

Hennessey was initially shown a yellow card after he raced out of his goal and clattered into Iran’s Porto forward Mehdi Taremi, but referee Mario Escobar was advised to review the decision, and returned from the monitor brandishing a red card.

IRAN SCORE IN THE 99TH AND 101ST MINUTES TO BEAT WALES pic.twitter.com/NGt2pXBxRW

The challenge was reckless and high, regardless of whether there was cover behind him.

The win for Iran means their match against the United States – which would always have been highly charged given the political history between the nations – could now be winner-takes-all for a place in the last 16.

Iran manager Carlos Queiroz felt too much external pressure was placed on his players ahead of the England game.

The team have become a political lightning rod for the turmoil in Iran, with those who are pro-regime criticising them for not singing the anthem before the England match and protesters attacking them for not doing enough to highlight the plight of women in the country.

The Portuguese coach criticised the Iranians in the stands at the England match who booed his team, but was much more complimentary about the fans after the Wales match.

“The crowd deserve a special word today,” he said. “It was a joy, it was happiness, it was drama, I love this game when things are this way.”

He hailed the character of his team, adding: “It was really very emotional because we rebounded from a difficult situation.”

Cheshmi admitted the team had found the first few days of the World Cup extremely tough.

“I should say that if the pressure was football-related that would be acceptable but if the players were under pressure unfairly that would not be right,” he said via an interpreter.

“Players were judged abruptly and received non-football pressure. All the team helped each other. I scored the goal but the team did the work.”

For well over an hour, Wales were completely outplayed by a vibrant and skillful Iranian team.

Robert Page’s side may have had more possession, but they created little beyond an early chance for Kieffer Moore, which was well saved by Hossein Hosseini.

Iran, though, must have felt the gods were against them.

They had a first-half goal ruled out by VAR for the most marginal offside after a flustered Connor Roberts gave the ball away and then struck both the right and left hand post within five second of each other from a counter-attacking thrust after the break.

On top of that, their imaginative passing movements stretched Wales on countless occasions and it was only due to some brave blocking by the excellent Joe Rodon and Chris Mepham, plus one superb finger-tip save from Wayne Hennessey, that the game was scoreless.

Kieffer Moore had started in place of Daniel James, after Moore’s transformational display against the USA, but Wales were so inaccurate they rarely found their target man.

Iran were feeling it after a LATE win against Wales ❤️ pic.twitter.com/pHzYoPTMql

Roberts, Aaron Ramsey, Ethan Ampadu and Harry Wilson were all regularly guilty of sloppy passes that went to white shirts, while Gareth Bale – so often Wales’ saviour on tight situations – was mostly anonymous.

If you can measure a team’s performance by the body language of their fans, then the Red Wall’s subdued silence – as they watched on in the only area of the Ahmad Bin Ali Stadium not in shade – said it all.

For the most part, the bucket-hatted brigade stood with their arms folded, looking perplexed, as they tried to work out why their team were son poor against opponents who had been thrashed 6-2 by England.

Page sent on James and Brennan Johnson for Roberts and Wilson and went for a system change to four at the back in an attempt to change the momentum of the contest.

But Hennessey came to the rescue by getting fingertips on an Ezatolahi low drive that was destined for the bottom corner of his net.

Joe Allen came on for the final push and Hosseini tipped over Ben Davies’ drive, but Wales were reduced to 10 men four minutes from time when Hennessey rushed from his box and clattered into Taremi.

Well, you can’t say it wasn’t deserved.
Wales have been desperately poor – absolutely ragged tactically and, being brutally honest, carrying players.
Iran, in fairness, were excellent – quite a response to that England defeat.

Guatemalan referee Mario Escobar branded a yellow card at first before upgrading it to red after a VAR check.

Iran seized on their one-man advantage as Cheshmi pounced on Allen’s poor clearance to fire home from 20 yards before Ramin rubbed salt in Welsh wounds with a delightful chip over replacement goalkeeper Danny Ward.