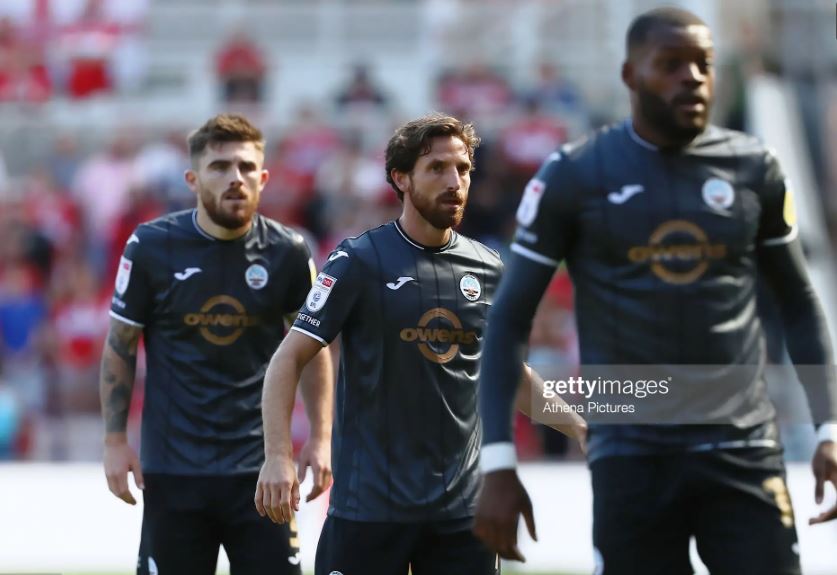 Joe Allen has admitted Swansea City players are “letting themselves down” with their current inability to deal with adversity.

The Wales midfielder was reflecting on another defeat for the Swans – their third of the current campaign – which has dropped them into the relegation zone.

Allen was part of the side beaten 2-1 at Middlesbrough at the weekend, leaving Russell Martin’s side in 22nd place in the table with just one win from the first six games.

“It’s frustrating, it’s just in certain moments we let ourselves down and sometimes our reaction to it is a little bit flat,” Allen has told the club’s website.

“We need to keep the belief in games that we can get back into it. The goal knocked our confidence and then conceding the second goal made it that much harder.

“Fair play, into the second half we put the pressure on and got one back, and at that point I think we were all quite confident that we could go on and get that second goal.

Swansea City go top of the Premier League after a 3-0 win at home against West Ham, following on from their 0-5 win at QPR, thanks to goals from Rangel, Michu & Graham.

+8GD, four more than Chelsea in 2nd place, what a time to be a Swansea City fan. 🦢 pic.twitter.com/RZDst8V8bU

“We just needed that one opportunity and unfortunately it didn’t quite happen.”

Riley McGree and Matt Crooks earned Boro’s win over 10-man Swansea. Joel Piroe replied with a penalty late in the second half but the Swans were left with too much to do to get back into the game after Ben Cabango was sent off late on.

Head coach Russell Martin has seen his team win just once in their last 12 Championship matches, since April. In that time they have picked up just nine points from a possible 36.

Martin is attempting to bring in Wolves’ 20-year-old midfielder Luke Cundle on loan, but has admitted the owners’ policy is to develop “assets” to sell on, rather than build for success on the field and there are unlikely to be any other players arriving, but some could leave.

Cundle made four appearances in the Premier League last season and will now be given the chance to test himself regularly in the Championship.

Wolves manager Bruno Lage, who was an assistant coach at the Swans under former boss Carlos Carvalhal, confirmed that Cundle was likely to move to south Wales on a season-long loan.

Lage said: “Maybe in the next days we can confirm everything. I know Swansea very well. If it happens it will be a good place for him (Cundle).

There’s no way this decline at @SwansOfficial gets halted without a change in ownership.

We still seem to be hemorrhaging money, getting increasingly in debt while having fewer and fewer assets.

It’s going to get worse before it gets better.

“It’s important for them to improve and learn. That’s one solution, the other solution is to find space for them to play more. We are looking at all the options until the end of the market.

“What we want is to take the best decisions for the squad and to also understand what the player needs at each moment. Luke trained with us all year and played a fantastic game against Tottenham, let’s see what can happen.”

Martin said of his team’s latest defeat, “We make a mistake and don’t react well enough to it. That’s a sign of where we’re at the minute, we’re really getting punished for those mistakes.

“It’s probably a sign of having a young team. We had a wobble for 10 minutes which leads to the second goal. After that, the boys couldn’t give us any more in the second half.”