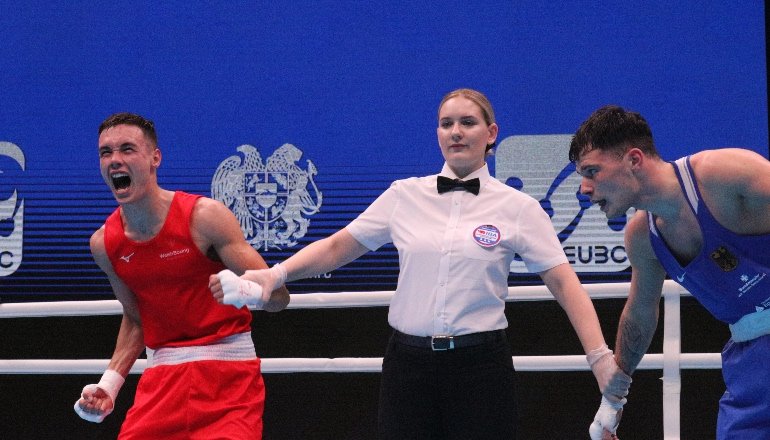 Garan Croft in red has been in exceptional form. Pic: EUBC.

Welsh boxing prospect Garan Croft will go for gold on Monday afternoon and bid to emulate the likes of Andrew Selby, Fred Evans and Joe Cordina.

Croft, from Crymach in Pembrokeshire, is through to the light-middleweight final at the European Amateur Boxing Championships in Yerevan, Armenia.

The 20-year-old – who will fight for Wales at the Commonwealth Games later this summer – will face fellow Great Britain international, Englishman Harris Akbar in the final.

In Garan’s fourth bout of the competition he puts in another impressive performance to seal his place at least a 🥈 ahead of tomorrow’s light-middleweight final. 👏 #GBEuros22 pic.twitter.com/JAhCMpJU9v

It might have been a Welsh double final in Armenia, but Garan’s twin brother Ioan was narrowly defeated in the semi-final of his welterweight contest by Lasha Gurili of Georgia.

Ioan had to settle for a bronze medal – his first at a major championships – after losing a unanimous points decision.

Garan found himself behind against Germany’s Magomed Schachidov in his semi-final contest after the Welsh fighter was docked a point for holding his opponent.

But Croft responded by unloading his cleanest punches to take a points victory on a split decision.

Croft said: “The referee took a point off; it was a bit unfair. There was no holding, it was just leaning on each other.

“But it made me dig a bit deeper. Maybe I needed that wake-up call when I was a point down. It woke me up a bit.

“I found something I didn’t know I had and came through it. I just did enough to win that one, I’m so chuffed with that.

“It’s my fourth bout of the tournament. I still feel good, I feel pretty fresh still. I’m so happy with that.

“I was in this position in the Under 22s [European Championships] a few months ago. It’s time to prove my point here and it’s two GB boxers in the finals.

Garan earns his third win of the tournament to book himself a place in the light-middleweight semi-final and with it, a guarantee of a medal here in Armenia. 🏅🇦🇲#GBEuros22 pic.twitter.com/5ERCyaVNmy

“It shows the level we’re training at in Sheffield, which is good. I’m ready.”

Flyweight Selby and welterweight Evans were Wales’ first European amateur champions since 1925 back in 2011. Their historic double was followed by lightweight Cordina in 2015.