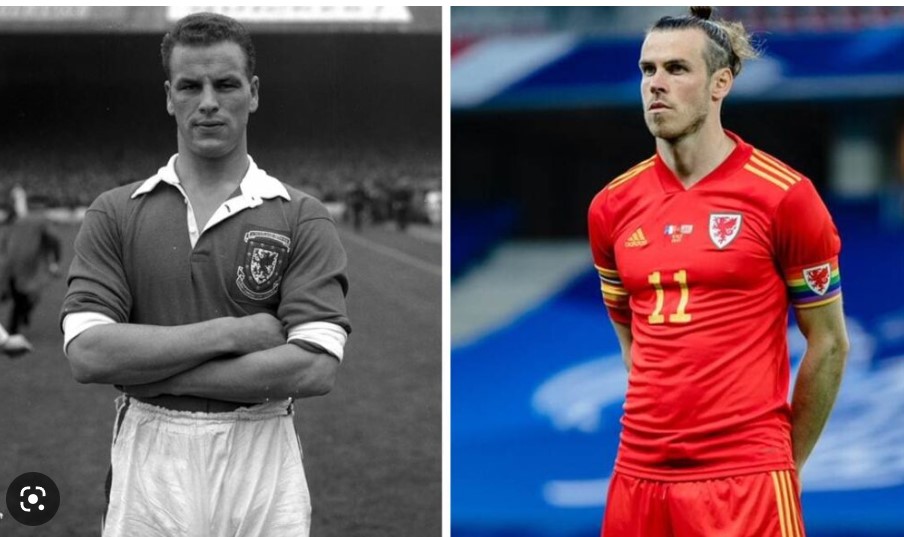 So, just who is the greatest Welsh footballer of all time? Gareth Bale or John Charles?

Or maybe it’s Ryan Giggs, the owner of most medals.

Or perhaps your vote goes to Neville Southalll, gloved guardian of the goalmouth for 16 years. Or maybe there’s a quirky preference out there among the middle-aged for Billy Meredith, the oldest player ever to pull on the red shirt at 45 years and 229 days.

But in terms of status, it generally comes down to a head-to-head between the two figures who span the 64 years between Welsh appearances at a World Cup finals – Charles and Bale.

King John was there with Wales in 1958 in Sweden. Bale, the modern day prince, will lead Wales out against the USA in Doha on Monday and is favourite in the bookies’ market for Wales’ top goalscorer in Qatar

Giggs may have won more trophies than both of them – an astonishing 35 during his time at Manchester United – but he never managed to play at a major finals for his country and he never took his talents overseas as a club player.

His Welsh cap tally of 64 appearances may be more than Charles’ total of 38, but it’s dwarfed by Bale’s current total of 108.

As for goals, Giggs managed just 12 – three fewer than Charles, the man Juventus fans dubbed the Gentle Giant during his time with them between 1957 and 1962.

As for Bale, he has scored 40 goals for Wales, an achievement that is best considered in the context of who is his nearest rival. Ian Rush, Liverpool’s greatest-ever goalscorer, only managed 28 goals for Wales and so lags 12 behind Bale.

Not only did the army allow him to play for Leeds United during his years of National Service, but he was among the very first British players to play professionally overseas.

Not only that, but he shaped the mould for British players to achieve widespread fame, and some fortune, with a top European club, in his case, Juventus.

As a Welsh teammate of Charles in 1958, you might expect Cliff Jones – one of only four survivors from that squad – to be clear in his verdict about which player is/was the greatest in a Welsh shirt.

Jones was a special guest at last week’s Wales squad announcement in Tylorstown and said: “John Charles, was, for me, the best Welsh player of all time.

“I remember he took a team of players over to play charity games in Italy. One of them, there were 50,000 people there.

“When John came out, they all stood up and started chanting his name. ‘CHAR-LES, CHAR-LES’ – 50,000 people all singing it.

“That was just a charity game, but that’s the effect he had on people, and the supporters of Juventus. They just loved him, and he was a special player.

That sounds clear enough. And yet after Jones had spent some time with Bale at the start of this week for a video filmed by the FAW, he had a slightly different perspective.

The 87-year-old – still young enough at heart to have a decent Twitter presence – described Bale as, “the greatest Wales player of all time.”

It’s not altogether clear why Cliff might have changed his mind in the space of a few days, although that’s surely the prerogative of anyone in their eighties.

But here are some more facts that might swing some doubters into agreeing to put the current captain top of the pile.

Compare that to Charles, who won three Serie A titles with Juve, two Italian Cup winners’ medals, plus a Second Division title with Leeds and a couple of Welsh Cups with Cardiff City.

Still not convinced? Look again at those milestones for Wales.

Yes, it has to be factored in that Wales play far more games each year now than in the 1950s and 60s. After all, Charles lasted 15 years in the Wales team, only a year less than Bale.

But it’s surely the context of Bale’s match-winning exploits that mark him out. He’s not just been playing, and scoring, he’s often been winning games with moments of individual brilliance.

That ice cool goal against Belgium in Cardiff that took Wales to Euro 2016.

That free-kick against Slovakia at the finals, the goal against Russia, the assist against Northern Ireland, the two astonishing strikes against Austria earlier this year and then the most prized goal of all, against Ukraine, that ended the 64-year wait.

The Greatest in red?

Even the Gentle Giant might have to look up to the marvel with the man bun.