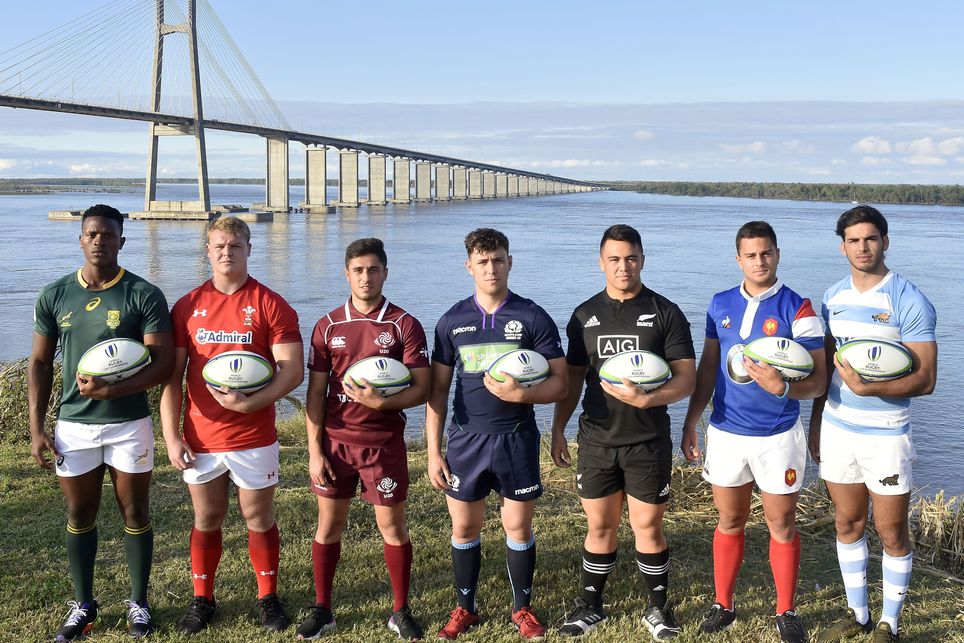 Wales U20s captain Dewi Lake (second from left) joins the other skippers ahead of the tournament kick-off. Pic: World Rugby.

Wales will have to get back to winning ways against host nation Argentina if they are to make a major impact at the World Rugby Junior Championships which kicks-off today (Tuesday) and is live on S4C.

Last season, the Pumas came out on top 39-15 in France and they also pipped Wales in the knockout stages in 2010 to reach the fifth-place play-off game thanks to a 9-8 kicking competition victory after the two sides had tied 19-19 after extra-time.

With the 2019 tournament being staged in Argentina it all adds up to a tough opening task for Dewi Lake and his side this evening (kick-off 5.00pm BST – live at S4C Clic and on S4C Chwaraeon Facebook) as they face the young Pumas for the sixth time in the tournament.

“We’ve come to Argentina wanting to be as successful as possible, but are very aware that wins at international level do not just happen – especially against a quality team like Argentina in their opening match of a home World Cup,” said Wales head coach Gareth Williams.

“The challenge for us is to be at our best from a tactical, technical, physical and mental point of view. If we can harness those areas in our preparation, we’ll hopefully fall the right side of the scoreboard come the end of 80 minutes.”

At least eight of the Welsh side will know what to expect having played against the Pumas in last year’s competition.

There are two players returning for the home side, who have reached the semi-finals once.

10 KEY FACTS ABOUT THE U20 JUNIOR WORLD CHAMPIONSHIPS

This year’s event is the 12th edition of a competition that began in Wales in 2008, when Sam Warburton captained the home side.

Argentina becomes the third country after Italy and France to stage the event twice, having first hosted in 2010. The host nation has only won the tournament three times, South Africa in 2012, England in 2016 and France in 2018.

New Zealand winger Tevita Li scored a record 13 tries across his two appearances in the U20 Championship, while Australia’s Andrew Kellaway holds the record for the most tries in a single Championship with 10 in 2014

Wales’ final pool opponents, Fiji, bounced back to the U20 Championship stage for the first time since 2014 by winning the sister event, the U20 Trophy, in 2018.

Some 655 players have taken part in an U20 Championship and gone on to play test rugby, with Argentina boasting the most graduates with 67. More than a quarter of players at RWC 2015 had come through the U20 Championship pathway.

Three players in the class of 2019 have already been capped at test level in England back rower Ted Hill, Georgia hooker Van Karkadze and his captain Tedo Abzhandadze.

Brodie Retallick became the first U20 graduate to be crowned World Rugby Men’s Player of the Year in 2014. He was followed by fellow All Black Beauden Barrett in 2016 and 2017.

WALES AT THE JUNIOR WORLD CHAMPIONSHIPS