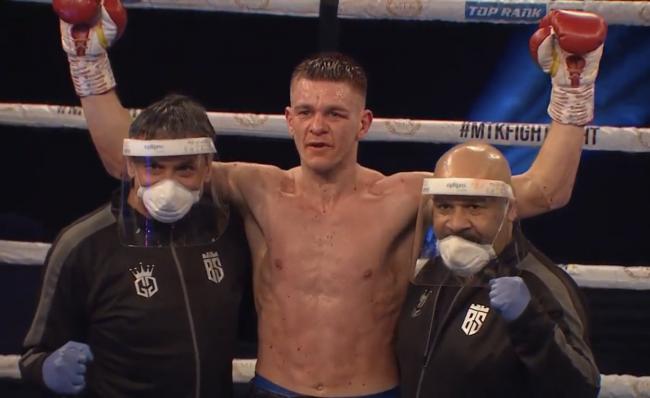 Gavin Gwynne insisted nobody was going to stop him claiming the vacant Commonwealth lightweight title in Bolton.

The Treharris man stopped Belfast’s Sean McComb in the seventh round of a ferocious fight on Friday.

@gavin1gwynne you deserve this so much, one tough SOB. Enjoy your success.

“We know Sean is a class amateur and I couldn’t outbox him. I had to take it to him, I started going to work and putting my shots together.

“Fair play to him he stayed on his feet but we got the win, and I can’t put into words how much it means.

“I’ve had big fights but it was the first time that Sean had really stepped up, so I knew this was going to be tough for him. This will be my boy’s belt now!”

Having endured two postponements due to COVID-19 since the start of the year, the two men were eager to make an early impression at the University of Bolton Stadium.

The contest was fought at a fierce pace, which saw both challengers land huge shots. Each enjoyed successes throughout the fight, and both had to deal with cuts.

McComb was opened up as early as the first round over his eyebrow, while an accidental elbow resulted in a bad cut on the back of Gwynne’s head.

But the Welshman’s relentless style throughout the fight, which saw him land a series of punishing head and body shots, eventually overcame the unbeaten McComb.

After two minutes and nine seconds of the seventh round, McComb eventually turned his back on Gwynne’s assault forcing referee Steve Gray to stop the fight.

Having lost on points to fellow Welshman Joe Cordina in 2019 and then stopped by James Tennyson for the British lightweight title, last summer, Gwynne was not to be denied in his third title attempt.