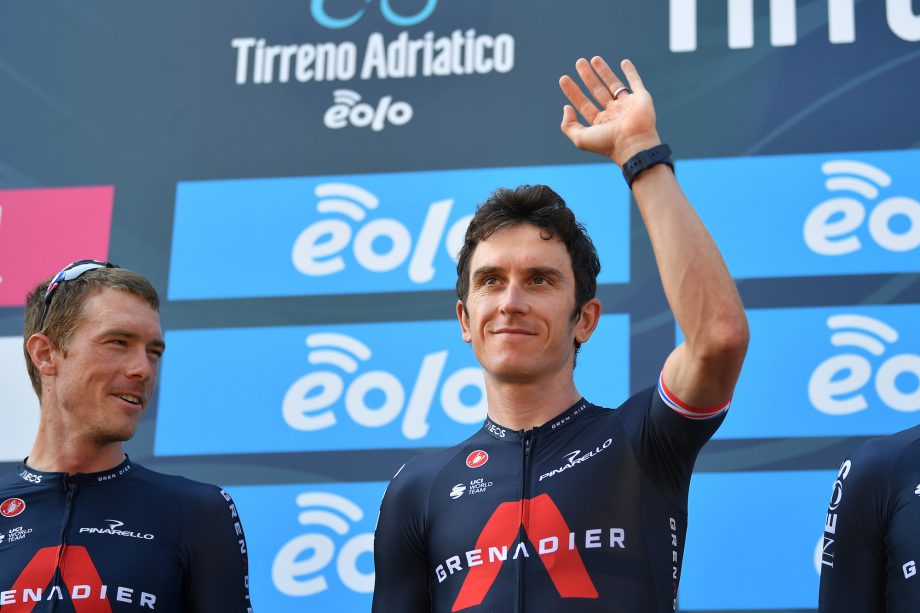 Geraint Thomas launches his bid for the Giro d’Italia crown in Sardinia on Saturday happy with his tag as one of the strong favourites.

The 2018 Tour de France champ has hit form at the right time as he looks for the second Grand Tour title of his career.

Thomas’ hopes of adding the maglia rosa to his Yellow Jersey from two years ago are also boosted with this year’s Giro route containing three Time trials.

And for those who expect his rivals to attack him in the mountain stages – with 5,000m of climbing just on stages 17, 18 and 20 -the 34-year-old has a typically droll answer.

“I don’t know if you’ve seen the Tour but we do a lot of long climbs there too,” the Team Ineo rider responded at the pre-event press conference.

“There are obviously going to be tough days, and mountains are where it’s won and lost. But yeah it’s a tough race and I think the weather will add to that if it’s cold or raining. It’s definitely a big challenge and will be an exciting end to the race.

“I think (I am) one of the favourites probably, there’s a strong field here.

“It’s nice when you hear people say you’re the favourite but you don’t really think about that, just try and get here in good shape and race as well as you can. Hopefully, they’re right.”

“I won the Tour in 2018, I was second last year. At Tirreno-Adriatico I felt I was getting stronger throughout and the Worlds TT went well.”

Thomas finished second on Tirreno-Adriatico behind fellow Brit Simon Yates who will be one of his main rivals over the next three weeks.

He then went on to finish fourth at last weekend’s World TT champs in Imola where the winner was Italy’s Filippo Ganna, who will be one of his support riders at the Giro.

“No external pressure from the team…no-one’s said anything to me [about having to win] anyway.

“I’ll just worry about myself. A lot of things can happen that are out of your control, what will be will be.”

Thomas has focussed on the Giro after it was decided that he would not ride Le Tour where Team Ineos saw defending champ Egan Bernal abandon the race.

Thomas’ absence from the team in France had led to questions over whose decision it was, but if there was any bad feeling that was dispelled by team boss Dave Brailsford.

“This is the first time we’ve seen each other (since then), he just punched me in the mouth as we walked in,” Brailsford joked.

“I think people misunderstood the whole thing around the Tour, it’s not a non-selection when you look at the situation. Everyone came through the pandemic in different ways. We sat down, we’ve known each other a long time and can sit down and have a very honest conversation.

“Now, we’re starting the Giro where he’s in a position for the overall. I think it’s more exciting for a rider of Geraint’s standing.”