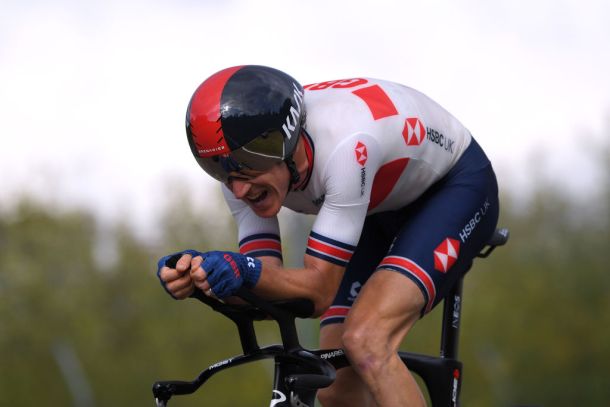 Geraint Thomas has revealed how he rode the World Time Trial Championships in Italy without any information after his Garmin bike computer was mislaid.

Wales’ 2018 Tour de France champ just missed out on a bronze in Imola by seven seconds as he finished fourth.

But Thomas was left wondering what might have been having had to ride the 31.7km course without any info regarding his speed or power effort.

“It was close, it’s just a shame I didn’t have my Garmin, so I was riding completely blind for the race – no power or distance or time – so it was a bit frustrating,” Thomas said.

Not the result I was hoping for but great to see this pair at the finish. First race for Macsen 😍😍 pic.twitter.com/4g1SMRvP0X

“I think I paced it relatively well considering. It’s just a shame, because it would have helped to have that in the closing stages really, especially from the left-hander to the little kicker. It keeps you so focused and dialed into it.”

Thomas spent the last few minutes before he set-out trying to fit a replacement computer to his bike.

“I warmed up on a different bike and then I got to my race bike and it wasn’t there,” added the Ineos Grenadiers rider.

“People were running around looking for it… No idea. Someone f***** up, but that’s the way it goes.

“I only got my race bike three minutes before the start and I was like, ‘where’s my Garmin?’

“They gave me a spare one and I was frantically pairing that. Then I went to put it on, and it was too big to fit on, so I was like, jeepers, but that’s just the way it goes.”

“I kind of wanted to go harder into the wind on the way out, as if it was to the top of a climb almost, then come back down,” said Thomas. “So I was kind of treating it like that, attacking it, but obviously, without the Garmin, I wasn’t too sure of how hard I was actually going.

“I tried to stay on it a bit until the kickers with about 5k to go and then attack it on the way home. I’m pretty happy with how I paced it really. But like I say, it would have been nice to have had the Garmin.”

But Thomas reckons his performance augurs well for his crack at the Giro d’Italia which starts in Sardinia next Saturday.

The course includes three TTs including the opening prologue which his team-mate Filippo Ganna will start favourite after his world TT victory on home soil.

Ganna will be one of Thomas’ support riders on the Giro including Rohan Dennis, who saw his defence of the world TT title end in fifth spot.

“To go so close to a medal is frustrating but that’s the way it is, and at least it looks good for the Giro and the TTs there,” said Thomas.