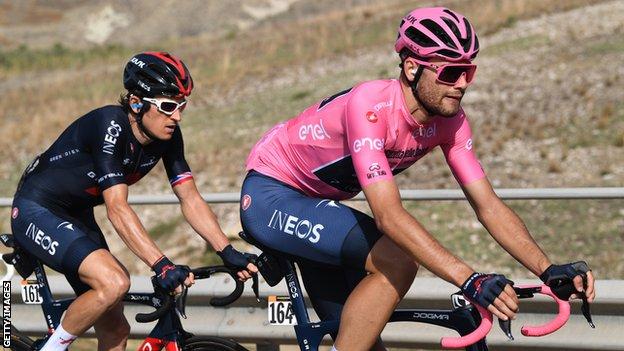 Geraint Thomas will have to ready for the battle for the Giro d’Italia to erupt on Mt Etna on Monday.

But Monday’s 150km third stage sees a near 20km climb at the end on the steep, twisting slopes of the volcano where the average gradient will be around nine per cent.

The stage will be the first time his rivals for the maglia rosa can seriously try and take some of the time they lost to Thomas on Saturday’s time trial.

Diego Ulissi (UAE Team Emirates) gave Italy its second win in a row with a powerful surge on the uphill finish in Agrigento after the 149km run from Alcamo.

But the short, steep climb did not create big enough gaps to dislodge Thomas’ Ineos Grenadiers team-mate Filippo Ganna from the top of the overall standings.

“The climb was really hard but not too steep,” said Ganna. “The peloton pulled really hard at the finish and it was a big problem to follow.

“But I was able to conserve the jersey and tomorrow I will work for the team. Tomorrow on Etna is a really hard day and it can decide the GC for the next few days. I’m here to support G and I’m happy to support him.

“Being in pink is really nice. To have this jersey on my shoulders gave me the power to finish the stage. To have it one day more is great. I wish I could spent more time in the jersey.”