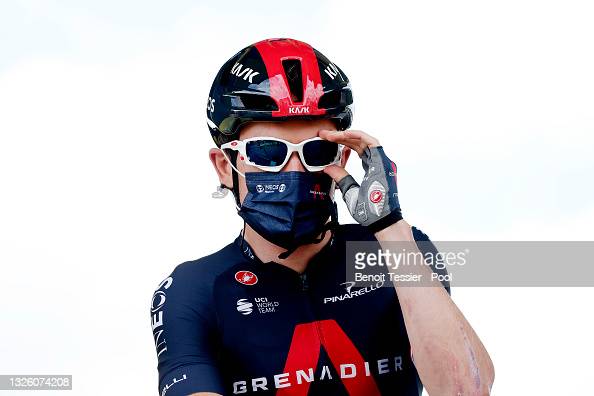 Geraint Thomas thankfully come through stage four of the Tour de France unscathed as he gets ready for the first big individual test of the race.

The 2018 champ finished safely in the pack on Tuesday – just 24 hours after his Yellow Jersey hopes looked in tatters after a heavy crash.

But Wednesday’s first of two individual time trials – over 27.2km from Change to Laval – gives him the chance to regain time lost to his rivals if the right shoulder he dislocated on stage three is fully recovered.

The Cardiff-born rider needed a couple of minutes of treatment on the roadside as has explained how a race medic popped his shoulder back in place.

“The shoulder is a bit sore but hopefully once I get going it will loosen up a bit,” said Thomas, before the start of stage three from Redon to Fougeres.

“The shoulder for sure is just going to be painful for a few days but I’ll get on with it,” he said.

“It came out and luckily the race doctor put it back in when I was on the floor. Then it was just instant relief. It felt so much better then. I got back on the bike and managed to finish the stage.”

“I’ll take it day by day and then we’ll see. We’ll deal with the rest after.”

Fellow Brit Mark Cavendish completed a fairytale return to the Tour when he claimed his 31st stage victory – and first since 2016.

Arguably, the greatest sprinter the sport has seen triumphed in a thrilling finale as long-time breakaway rider Brent Van More was caught with just 250m left of the 150.4km stage.